Death and the Figure-Skating Footman

Written by Patrick
My great love is for mysteries of the Golden Age, and the authors who emulated the style. The richness and imagination found in stories written at the time is just incredible. Reading a Golden Age mystery is almost like agreeing to an author-reader duel with whoever the author was. The author throws every trick in the book at you: red herrings, fake alibis, multiple murders... Meanwhile, the reader tries his (or her) best to keep their balance, thrusting back with their own deductions, trying to figure out just what the old devil’s up to this time. It’s plenty of fun to read along and try to beat the detective to the solution. I can’t help but get a picture in my mind of a pleasant evening of deduction by the fireplace: Dr. Fell smoking a pipe in a red leather armchair, Sir Henry Merrivale battling it out with a pair of knitting needles as Miss Marple attempts to help out… It’s a very warm, pleasant image.
Unfortunately, somewhere along the road, this kind of mystery became unpopular. Instead, we are stuck with 600 page books, 450 of which are character angst, 100 of which is devoted to social commentary, and the rest is the plot. We’re stuck with characters moaning about how unhappy they are, the details of their various love affairs, and attempts at faux artistry all over the place. The picture I get of the modern mystery stage is a dark, grim one, where imagination and creativity are almost viewed as crimes in themself.
That is why I would prefer reading a Golden Age mystery almost any day of the week –  and why finding a good, (more) modern mystery author is something of a miracle. Enter William L. DeAndrea. 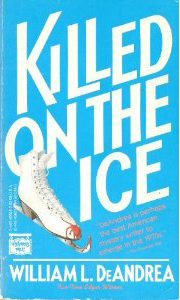 I first heard of him when a fellow mystery fan wrote a positive review of The HOG Murders, which involves a maniacal serial killer (one of my favourite set-ups). Unfortunately, it is proving an elusive book for me to find, so I decided to give DeAndrea’s Killed on the Ice a go instead.
To my surprise, DeAndrea got off to a flying start, instantly putting me on his side. Back when I reviewed The Affair at Royalties, I complained that Baxt (the author) introduced an unnecessary psychologist into the book, ruining his ideas in some mistaken idea of satire. DeAndrea apparently crossed time and space and read my mind— this book starts with the murder of a psychologist, by all accounts an extremely despicable man. It is as though DeAndrea reached out and killed Baxt’s character: he was an overbearing, pompous man who was always right, unless he was wrong, in which case he was still right. Any gesture of respect, such as wearing black for mourning, was for him an act of symbolism that was repressing society. Everyone around him (practically a specimen) was mentally ill in one way or another, and if they denied it, it was because they were afraid of his being right. This character, Dr. Dinkover (I’m not making that name up!) does not even survive the first page, and he’s annoying enough dead. (I mean this in a good way.)
In his place, the reader gets a treat. DeAndrea’s detective is Matt Cobb, vice-president of the Network (which is never named, just called the Network) who specializes in smoothing things over with the public and so on. He discovers the corpse at an ice rink, and is consequently launched into the investigation. One of his men is attacked and sent to hospital, but it’s not quite clear whether this attack was related to the Doc’s death or not. Cobb is a very fun detective, making amusing, (sometimes) sarcastic comments in his head. He seems to be channelling the famous hardboiled detectives without having their negative qualities, and he does not make it a preoccupation to be rude. He’s a nice guy you want to win in the end.
Another major character is a Japanese American figure skater, Wendy Ichimi. She hated the Doc and blamed him for her father’s death, so she had a nice motive to do him away. She gets to know Cobb a bit, and they have some nice banter, but DeAndrea makes a major miscalculation before the half-way point: he has them spend a night of passion together, and suddenly, the romance is unimportant. You already know where it’s gone and don’t end up caring all that much where it goes from there. It ends up being more boring than anything.
So how does DeAndrea fare with his plot? Surprisingly well! His mystery is not particularly complex and apart from the tedious romance scenes, it doesn’t feel unnecessarily padded. He relies heavily on the mysterious actions of the victim, who apparently crawled along the ice to an American flag to pull it down, holding onto the flagpole. Was it a final gesture of contempt? An attempt to pull the flag off to stop the bleeding? A dying message? DeAndrea has plenty of fun with this suggestion, playing around with the possibilities, which include the possibility that the criminal is a Polish American Nazi from ancient Rome, who was a paymaster in the army with the rank of colonel, or in the navy with the rank of captain, who plays professional football. (You had to be there.)
More mysterious events occur which make it seem like Wendy Ichimi is being targeted. Cobb has to fight off Assistant District Attorney Livia Goosens, who left the convent to become a prosecutor, earning the nickname The Frying Nun. The solution is a good one that caught me completely off guard, and DeAndrea explains everything well, convincing you of the inevitability that CENSORED (and only CENSORED) could have been the culprit. The novel even climaxes on an exciting shootout.
Overall, Killed on the Ice is a success. It isn’t a revolutionary book, but it provides solid fun and is a well-plotted, enjoyable mystery, which has plenty of fun. DeAndrea is all right in my book!