The Queen is Dead 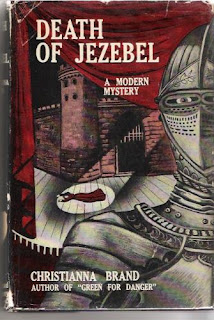 One of the most criminally forgotten mystery writers ever is Christianna Brand. Brand was a supreme talent, who perfectly fused complex puzzle-oriented mystery with strong characterization. With her novels, it isn’t simply about this evening’s eccentric detective, rolling the dice to figure out the murderer, or anything of the sort. Brand could create likeable, believable characters the reader comes to know closely, feeling sympathy for both the innocent and the guilty, and as a result, her books often have depressing endings.
Take Death of Jezebel, for instance, one of Brand’s most highly-praised works (and also a very hard one to find!). The story opens in 1940 as a nice young man named Johnny Wise discovers his girlfriend Perpetua Kirk with another man, Earl Anderson—this is cruelly unveiled to him by a rather sadistic woman, Isabel Drew. Stricken with grief, Johnny commits suicide.

The story then skips forward seven years: in 1947, Isabel is still as nasty as ever, Earl Anderson is an out-of-work ageing actor, and Perpetua Kirk has never quite been the same— her spirit died on the same night as Johnny, but her body lives on… The three players involved in Johnny’s tragedy are soon thrust into a new drama, as each get threatening notes, warning them that they will die. And the killer makes good on his (or her) promise, striking under seemingly impossible circumstances at a pageant, as Isabel (often referred to simply as Jezebel) is strangled on top of a tower in full view of thousands of witnesses and thrown down to the stage below. Thus begins a complex mystery and drama…
Brand brings together two detectives to unravel this case. The first is Inspector Charlesworth, who starred in Brand’s first novel, Death in High Heels, and apparently one more. I have yet to read either. The second is her more regular detective, Inspector Cockrill, who is the main detective in this book. Together they investigate the crime, coming up with a few theories to explain the impossibility, and it seems like each time they’ve got a plausible explanation, Brand purposely blows it sky-high.
This is what makes Brand one of the best writers all-time, in my view: the excellent way she fused a complex plot with excellent characterization, which proves that yes, it is possible for these two to co-exist. (I admit, however, that my last outing with Brand was a rather off-putting disappointment: Suddenly at His Residence began as a delightful parody of conventional mysteries, with a murder victim ready to alter his will at the drop of a hat. Unfortunately, it suddenly lost its touch when the murder actually occurred… But this is a review of Death of Jezebel.)
Brand is at the top of her form here. She doesn’t  linger in character angst, but she puts you through the individual struggles of her characters quite effectively nonetheless. She has a very clever impossible situation and she offers a few false solutions. The story is laced with a sense of humour which pops up from time to time—this is a dark work, after all, but that doesn’t entirely banish humour from the proceedings. Overall, the book is wonderful—at the very least, it is just as good as, if not better than, Green for Danger, another of her masterpieces.
However, Death of Jezebel has one very distinct advantage over Green for Danger, and that is the character of Inspector Cockrill (“Cockie”). He becomes his own character in this novel, while he was a relatively nondescript character in the past. Here he is shown as a man who, in the eyes of the youth-obsessed world, is far too old to be hanging around anymore, but he’s still got some fight left in him, and by gum, he isn’t going to give up. You get to share not only the suspects’ emotions, but you’re shown Cockie’s insecurities as well, and overall, this invests your attention in the book even more.
What more can I say? Brand does everything right and really outperforms herself. This is a wonderful book, certainly a candidate as one of the all-time mystery classics. I was lucky enough to find it on Interlibrary Loan, but when I get the chance, I will track down a copy and buy Death of Jezebel, which will then be guaranteed a permanent spot on my shelf. It is worth every penny spent on the effort.