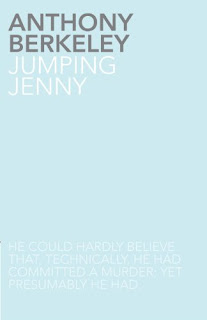 First and foremost, I must take the time to applaud the efforts of James Pritchard, Agatha Christie’s great-grandson, who has created his own company, The Langtail Press, and has busily been resurrecting lost classics from the void of obscurity back into print—particularly those written by Anthony Berkeley.
I had previously read only one Berkeley novel, The Poisoned Chocolates Case, which was a brilliant tour-de-force in which at least half a dozen false solutions are proposed. I enjoyed the novel tremendously, as it was written with intelligence and wit, and I could hardly wait for the chance to read another Berkeley novel. At last, I selected Jumping Jenny and ordered it from The Langtail Press’ impressive catalogue.
Unfortunately, I feel I must point out the major problems of this text as published by The Langtail Press. It is a typographical nightmare—words are randomly capitalized, some proper nouns mysteriously escape capitalization, commas and periods are printed where they have no right to exist, a question mark replaces the letter s at least once, new paragraphs are started in the middle of a character’s dialogue (clearly a mistake), etc. Although the print is lovely and easily read, these errors get very distracting—and I haven’t even mentioned the occasional typos that slip by in every book. It reads as though a poor letter-recognition program came up with the text, and someone went through to correct it, but they got more lazy and more tired as they went further on. The first 40 pages or so are excellent, and then things slip, to the point where it’s comparable to the worst of Carrol & Graf…
DISCLAIMER: Since the time this review has been posted, the errors I've pointed out have been corrected.


Thankfully, the many problems that plague the text did not prevent my full enjoyment of it. Jumping Jenny is a delightful inverted murder mystery—the culprit is known to the reader from the start. Meanwhile, Berkeley’s amateur sleuth, Roger Sheringham, is set loose to investigate the crime, and is convinced someone else is responsible, and immediately sets forth to obstruct the course of blind justice.
See, the murderer in this story actually did everyone a favour by dispatching the highly disliked Mrs. Stratton to the afterlife. She was an extremely spiteful woman with no redeemable qualities whatsoever, who made life hell for her long-suffering husband. A natural exhibitionist, she caused quite a scene at a party Sheringham attended, and even spoke of suicide as a happy way of escape… Nobody really took her seriously, but then she is discovered hanging from a makeshift gallows, and although it seems like a clear case of suicide, some indications point to murder…
Berkeley, meanwhile, mercilessly mocks his amateur sleuth Roger Sheringham, who is convinced that the husband is the guilty party and decides to protect him no matter what. And thus begins a nightmare of perjury, chairs, alibis, pipes, etc. as Sheringham pursues a non-existent cause, but he himself is never aware of the joke.
The plot is overall excellent and highly imaginative—it engrosses you from the start, and it is written with intelligence and a great sense of humour. Its characters are excellent and fascinating. Overall, Jumping Jenny is a marvellous read right down to its brilliant final scene. As inverted murder mysteries go, my experience with them has been rather limited, but I wouldn’t hesitate to count this as one of the best I’ve come across.