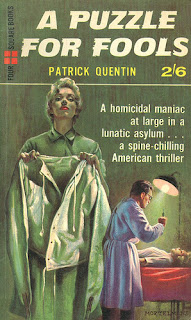 The name Patrick Quentin was a penname for a complex writing team of several people, whose inner workings I really cannot speak of with any sort of authority. I freely admit it: I know nothing whatsoever about the internal workings of this group. In fact, you will get so much more information by reading the GAD Wiki entry on Quentin. My purpose here is to discuss the first Patrick Quentin novel, A Puzzle for Fools.
The main character in A Puzzle for Fools is Peter Duluth, a theatrical producer who hit the bottle a little too hard after the death of his wife in a fire. Eventually, he realised he was throwing his life away and his friends were getting tired of being sorry for him, so he decided to fix his life while he still had the chance. He enrols in a sanatorium run by the very modern Dr. Lenz, who prefers his patients to feel like on some sort of vacation, and not in a sanatorium.
The opening scene catapults the reader into what is a compelling, fast-paced read. Peter Duluth is getting ready to go to bed when he hears a voice—his own voice—speak to him; “There will be murder…” He becomes panicked and causes a scene, running away from his room and, to his surprise, into the room of the daytime nurse, Miss Brush, who asks one of the attendants to escort him to Dr. Lenz. Lenz listens to Peter’s story and confides in him: there seems to be a malevolent influence in the sanatorium. He pleads Peter to keep an eye out, since his mind is relatively sane. He theorizes that this may provide Peter with a fresh interest in life, which he has sorely been lacking, and he is correct: Peter looks at his surroundings with new eyes.
The sanatorium contains a colourful bunch of characters. One, Mr. Laribee, is a wealthy financier who is convinced he is losing all his money in a stock-market crash, hearing his stockbroker’s voice and the click of a ticker as the stock prices go down. Rather than dismiss these tales, Peter takes a particular interest in them… The patients are a delightful bunch, and the various doctors and attendants are very interesting as well: Dr. Moreno, for instance, becomes a figure of the bureaucratic red tape that Peter Duluth despises so much. Others, such as Miss Brush, waver between good and bad with such regularity, you’re never quite sure what to think of them. A Puzzle for Fools deals with the dark theme of potential insanity, of the thin line between sanity and insanity, with brilliant characters and a complex plot that could’ve been stolen directly from Ellery Queen.
The setting of the sanatorium is fascinating and brilliant, and easily creates atmosphere John Dickson Carr would’ve been jealous of. Also, there’s an excellent and genuinely intriguing romance between Peter and a lady patient, Iris Pattison, who becomes a suspect in the ensuing murder investigation. (Well, what else did you expect? Vandalism? Theft? No, no: it’s good old-fashioned murder.) Unfortunately, there is a problem: you know this is the starting book in a series, and that Peter and Iris are together in later novels… so suspecting her is a waste of time. You can’t really blame Quentin for this, but at the same time, it narrows down the field of suspects.
That being said, the murderer is extremely simple to spot. In fact, the solution is a major letdown, as Quentin makes a huge mistake by giving his killer too many skills, gifts, talents, etc.: “Obviously, only an expert acrobat could have committed this crime, and equally obvious, the killer had to know Russian! So who else could the killer be if not the ringmaster of a circus that once toured Russia? As ringmaster, what is more perfectly natural than him learning a trick or two from his employees? And since they toured Russia for 23 days, naturally he’d have to know Russian! It could only be the Italian bus boy, the only one who has the ability to manoeuvre a pogo stick—and not only that, he is an expert chicken trainer! This explains how the murderer left unnoticed!” Thus, many intriguing events are explained with a shrug of the shoulders and a general answer. And the most basic mistake of all is made when Quentin asks "What could be more natural?"
However, the plot in general is a fascinating read, and the book simply flies by. Overall, this is an excellently written debut novel, and I’ll certainly read more of Patrick Quentin in the future.