What's all this, then? 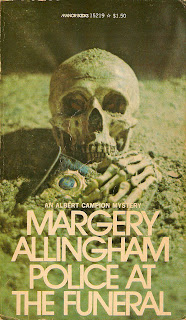 Margery Allingham is an interesting author, though definitely an acquired taste. My first Allingham was The Case of the Late Pig, and although I liked the quality of the writing and the writer’s sense of humour, I thought it was not the best introduction to her work, as her detective, Albert Campion, does the narrating, thus leaving me confused about who certain people were, if there were backstories or not, and so forth.
Police at the Funeral is far more traditional. It is told in third-person narration, and I followed the characters much better this time around. Of course, it helps that the characters are extremely well-written to begin with, and overall, Allingham does a fine job with her story.
It opens with Inspector Stanislaus Oates walking around London, being followed. As luck would have it, he runs smack into Albert Campion, wearing a deerstalker, acting like Lord Peter Wimsey, and demanding that he be taken seriously in his new capacity as Deputy Adventurer. It turns out Campion is waiting for a young woman named Joyce, whom he plans to humour as a favour to a friend of his, Marcus. She is worried about the disappearance of her Uncle Andrew. Campion over time realizes she isn’t being hysterical— and then, the evening papers proclaim that Uncle Andrew has been found in a river, hands and feet bound, shot through the head. In other words… murdered… [Cue the dramatic music!]
Campion makes his way to the Cambridge home of Joyce, where the entire family lives under the iron fist of Aunt Caroline. Socrates Close, the home in question, has not changed over time— the rules there remain Victorian, although the world has moved on. By detective story logic, then, Aunt Caroline should be the one in the river, but instead, it’s Uncle Andrew, a man nobody liked but at the same time, nobody had an actual motive for doing away with him. (Don’t be fooled by the synopsis, though— Caroline is a formidable old bird, and a rather sympathetic sort that Campion and the reader gets to like.)
The book is radically different from The Case of the Late Pig. Not only is it far longer (then again, Pig is more of a novella), but Campion is less a parody of Lord Peter Wimsey and more human. Also, Magersfontein Lugg, Campion’s servant, is conspicuously absent. He appears in the opening and in the very final pages, but apart from that, he’s gone— we don’t even get references like “I wish Lugg was here!”
What makes Police at the Funeral so interesting is the family at Socrates Close. Allingham does an exceptional job making them into actual characters that I got quite fond of. For instance, there’s the truculent Uncle William, the main suspect in the murder case: he has a secret to hide, admires Campion, and resents the presence of the police. Even someone like Uncle Andrew, dead before anyone shows up to investigate, feels like a very real person.
Also, Allingham’s writing is just brilliant. She was apparently quoted as having said "I write everything three times. Once to get it on paper, once to get it right, and once to make it sound as if I just thought of it." If that really was her process, it worked brilliantly here. Police at the Funeral is excellently written. It is atmospheric, interesting, and contains a pretty good plot. Allingham’s sense of humour is also present. Consider this excerpt from chapter 9:
“I enjoyed my dinner,” said Mr. Campion valiantly. “But my etiquette book rather let me down. It says that light conversation may be effectively introduced while passing the cruet. In this, of course, I was frustrated, as we all had our own cruets. Otherwise, no doubt, I should have been the life and soul of the party.”
As Allingham explains, the family started giving each diner their own condiments after a silly argument where Uncle Andrew refused to pass Aunt Julia the pepper and pretended he didn’t hear her. It is at the same time amusing, due to its childishness, and paints a rather pathetic portrait of a family determined to get on each other’s nerves no matter what. Economical, no? 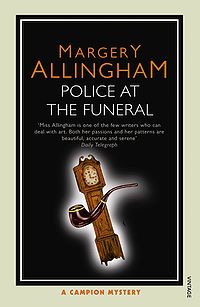 In fact, there’s only one flaw with Police at the Funeral, and that is its denouement. I really don’t like it. In general, I’m not a fan of explanations of this class— I will avoid being more detailed, but obviously, there are exceptions where I enjoy this twist. But I didn’t here. After all the journeying we did, we find out just whodunit and it feels anticlimactic, the more so because it requires a pointless lie from one of the characters. It’s done very well— in fact, it’s one of the best treatments of this twist I’ve ever seen. (Far better than a similar take from another Crime Queen.) But it left me disappointed. It must have been ingenious for its time, and maybe even qualified for instant classic, but it didn’t leave me enthusiastic like the solutions of The Tokyo Zodiac Murders or Le Diable de Dartmoor did. (Also, I recognize an earlier story with a very similar twist.)
Really, though, you can ignore my grumbling. Police at the Funeral is an excellent book that I highly recommend despite my purely personal issue with the twist. It’s not that there’s much wrong with it, it’s just a prejudice of mine that won’t apply to every reader. (Avoid the Wikipedia entry, as it spoils the solution. Why do they insist on doing this with the best books? Even Carr’s The Burning Court has its solution spoiled, despite the plot summary being extremely cursory!)
Also, is it just me, or did Allingham have some otherwordly skill for coming up with titles? Death of a Ghost, Police at the Funeral, The Tiger in the Smoke... They all sound awesome!