I am Inspector Tiger... 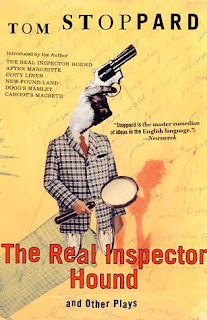 One of my favourite playwrights is Tom Stoppard, a veritable theatrical genius. His play Rosencrantz and Guildenstern Are Dead is one of my favourites; it’s an intellectual tennis match with the audience, as Stoppard retells the story of Hamlet from the point of view of Rosencrantz and Guildenstern, Hamlet’s two school friends. Throughout the play, the characters ponder on their purpose, the meaning of life, and the role of the theatre in life (although, of course, just about nobody debates that last point out loud).
Some of these elements are transferred into The Real Inspector Hound, Stoppard’s first play and a lively parody of the country-house whodunit, particularly Agatha Christie’s The Mousetrap. Our two main characters are Birdboot and Moon, theatre critics. Birdboot is a fickle critic who is willing to give actresses positive reviews in exchange for certain favours. Moon is a second-string critic, substituting for Higgs, the first-stringer, who has failed to show up.
The play they are sitting down to watch is a murder mystery, and Stoppard takes delight in poking fun at the conventions. For instance, consider the following dialogue near the play’s opening: 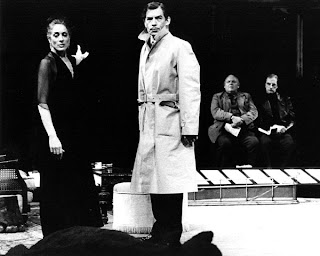 MRS. DRUDGE (into phone): Hello, the drawing-room of Lady Muldoon’s country residence one morning in early spring? … Hello!—the draw----- Who? Who did you wish to speak to? I’m afraid there is no one of that name here, this is all very mysterious and I’m sure it’s leading up to something, I hope nothing is amiss for we, that is Lady Muldoon and her houseguests, are here cut off from the world, including Magnus, the wheelchair-ridden half-brother of her ladyship’s husband Lord Albert Muldoon who ten years ago went out for a walk on the cliffs and was never seen again—and all alone, for they had no children.
Then there’s this piece of gold at the start of the play-within-the-play’s second act:
MRS. DRUDGE (into phone): The same, half an hour later? … No, I’m sorry—there’s no one of that name here. 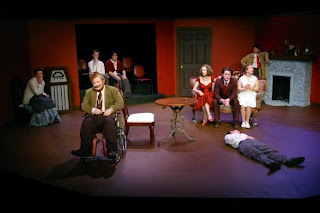 Basically, through the untitled play-within-the-play, Stoppard pokes fun at the artificial trappings of the country house mystery, and the title of this play is a direct reference to The Mousetrap, although perhaps I’ve said too much. Stoppard pokes fun at stilted dialogue, massive amounts of unnecessary exposition, unoriginal characters, and, above all, pompous theatre critics:
MOON: Does it, I repeat, declare its affiliations? There are moments, and I would not begrudge it this, when the play, if we can call it that, and I think on balance we can, aligns itself uncompromisingly on the side of life. Je suis, it seems to be saying, ergo sum. But is that enough? I think we are entitled to ask. For what in fact is this play concerned with? It is my belief that here we are concerned with what I have referred to elsewhere are the nature of identity. I think we are entitled to ask—and here one is irresistibly reminded of Voltaire’s cry, “Voila!”—I think we are entitled to ask—Where is God?
BIRDBOOT (stunned): Who?
MOON: Go-od.
BIRDBOOT (peeping furtively into his programme): God?
MOON: I think we are entitled to ask. 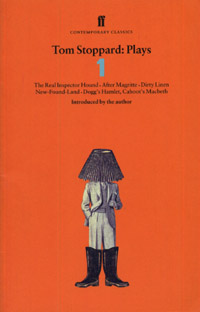 It’s all delightful fun, and when the play-within-the-play’s third act is scheduled to commence, a slight twist is thrown into the proceedings, as the critics, Moon and Birdboot, start to participate in the events of the play. The resulting ending is a delightful blend of reality and illusion, a complex twist that is sure to delight lovers of the genre such as myself.
You could go on and on about the symbolism of the meta-theatre and the play’s metaphors about the relationship of theatre to art and life, but I really don’t want to. Considered purely as a satire on the mystery genre, it succeeds wonderfully without crossing the line into mean-spiritedness. I highly recommend it.