Yet She Must Die Like famous critic Anthony Boucher, I’m a Catholic, and I believe God has a sense of humour. Either that or the ghost of Harry Stephen Keeler has been up to his old tricks again. Why do I say this? This morning, after several months of the application process, I went to volunteer at the local hospital for the first time. Later, I realised how ironic it was that I just finished reading Colin Dexter’s The Wench is Dead.
See, The Wench is Dead largely takes place inside a hospital, as Inspector Morse finds himself there, recovering from a nasty bout of illness. While in the hospital, Morse comes into contact with fellow patients, nurses, doctors, etc. and they all turn out to be a very colourful, lively bunch that I liked reading about.
But while in hospital, Morse reads about an old murder that took place in 1859. As time goes by, he grows more and more obsessed with the case and determined to solve it anew from his hospital bed, convinced that injustice was perpetrated back then and the wrong people were sent to hang for the brutal murder and possible rape of Joanna Franks. 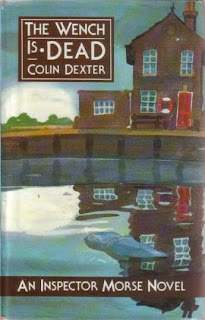 The plot idea, of course, is an homage to Josephine Tey’s famous The Daughter of Time. However, Colin Dexter’s murder case is fictional (whereas Tey’s detective, Alan Grant, investigated the real-life case of the Princes in the Tower). Dexter based his murder on a real-life murder case, but I cannot tell you just how similar the circumstances are.
To be honest, the mystery left me unimpressed. There is only a very limited number of possibilities, and the final “shocking” reveal is so self-explanatory I was surprised Dexter tried to explain it like a mind-blowing event, using phrases like: “Ye Gods!!! The blood was running cold through Morse’s limbs…”
Morse also has the greatest luck I can recall reading about in a long time, discovering no less than three (!) pieces of evidence that managed to survive from 1859 to 1989! The first time, it’s a wild coincidence you’re willing to accept; the second time, it stretches things. The third time, you throw your hands up in exasperation. The detective should be able to solve his cases through detection, not through this much luck. 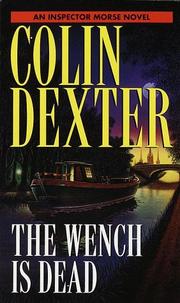 But maybe I’m being harsh on Dexter. After all, he does give his readers all the clues they need to come to the same conclusion as Morse. And the plot is tightly-constructed, easily keeping the reader’s attention. But at the same time, I expected the winner of the Gold Dagger Award to have a little more surprising of an ending. Peter Lovesey’s Bloodhounds, for instance, won the Silver Dagger Award—the second place to the Gold Dagger—in 1996, but that ending is far more jaw-dropping than this one.
However, I’m not such a plot purist that I can’t enjoy a book as a good story—and The Wench is Dead is definitely a great one. It’s got curious notes of poignancy, as several women manage to get infatuated with Morse in one sitting, but every reason for this is plausible. Morse does a lot of excellent reflecting on the generation gap that exists between him and the younger people in the hospital, particularly the young nurse Fiona, who consider Jane Eyre something of a bore (whereas Morse considers Bleak House the greatest novel ever written in the English language).
What I liked most of all about this novel was Inspector Morse. It’s hard not to like him. You never learn his first name, although you see it starts with an “E” here. You sympathise with him when he’s not allowed to have anything to drink prior to an operation. And his growing obsession with the 1859 murder makes for an interesting aspect of the novel. 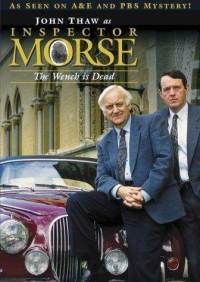 See, this is as much a novel about an obsession as a mystery. What starts as a harmless game to pass away the time becomes a growing obsession for Morse, who keeps trying to find one more bit of proof to confirm his theories, enlisting the aid of a fellow-patient’s daughter and his subordinate Lewis. In fact, if you removed the mystery altogether, you’d suddenly have a novel that you’re allowed to call literature. But critics and academics scorn the idea that a mystery can be literary, so such a statement would be blasphemy.
All things considered, The Wench is Dead is a very fascinating novel about a man’s obsession for finding the truth about a past murder. The scenes in the hospital are a highlight of the book, ranging from amusing to deathly serious, and all of them working. The characters are a delightful and strongly individual bunch you get to like. In fact, the only weak part about this novel is the actual mystery itself, which is fairly clued but also very easily solved and rather underwhelming.
Still, I guarantee readers that we haven’t seen the last of Inspector Morse or Colin Dexter here on the blog.