Written by Patrick
It is a capital mistake to theorize before one has data. Insensibly one begins to twist facts to suit theories, instead of theories to suit facts.
— Sherlock Holmes, A Scandal in Bohemia 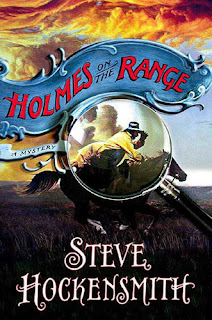 If you read this blog regularly, you may have inferred one thing about me: I absolutely adore Westerns. One of my favourite movies of all-time is John Ford’s The Man Who Shot Liberty Valance, starring Jimmy Stewart, John Wayne, Vera Miles, Lee Marvin, and Andy Devine (amongst others). It is, in my mind at least, as close as you can get to the perfect movie: plenty of action and suspense, just the right touch of comic relief from Devine, a truly frightening villain, and complex characters that you get to care for. There’s also a powerful sense of nostalgic regret, which may be one of the reasons the movie was filmed in black-and-white…
Unfortunately, it’s hardly likely that I’ll be able to find some way of sneaking in a proper review of a “pure” Western like The Man Who Shot Liberty Valance. But what’s the next best thing? Why, mystery/Western crossovers, of course! Because if you combine a murder mystery with cowboys, I’d like two subscriptions, please. I’ve reviewed such books in the past: William DeAndrea was en route to starting an excellent series in this vein starring Lobo Blacke and Quinn Booker, but his untimely death deprived us of more of their adventures. This is where Steve Hockensmith comes into play.
Hockensmith has come up with a brilliant way to pay tribute to Sherlock Holmes which seems like it would never work. The year is 1893 and the setting is Montana. Our main characters are brothers, Big Red and Old Red Amlingmeyer. Big Red is literate, was sent to school, and was a clerk for a spell; Old Red doesn’t know how to read, but he’s got brains and dislikes it when people equate “uneducated” with “stupid”. The brothers stumble over a Sherlock Holmes tale called The Red-Headed League, and it captivates Old Red’s imagination. He has Big Red read it to him over and over again and he decides he’s found his calling: he’ll be a deducifier just like ol’ Holmes.
One day, the two are in a saloon when a bunch of cowboys from the Bar VR ranch show up, among which are Uly and Spider McPherson, sadistic and tough-as-nails (particularly Spider, whose nickname is quite appropriate). Uly announces to everyone in general that the Bar VR is hiring, and much to Big Red’s surprise, Old Red gets into the line that forms! Well, family sticks together, so Big Red follows his brother and both end up hired.
But something is wrong at the Bar VR from the very start—the new hands have their guns confiscated and much of the ranch is forbidden territory to them. The McPhersons are being overseen by Perkins, a British gent who explains that he doesn’t look for nor reward initiative. What begins is a veritable ordeal as the brothers are put to work by the McPhersons and their unpleasant bunch.
One night, a vicious storm breaks loose, and Perkins (who has stayed inside the house almost all the time until now) is seen riding a horse in the downpour. Come the next morning, the weather has improved, but Perkins is nowhere to be found. A search is made and his corpse is found, completely trampled.
Of course, it’s quite possible that Perkins’ death was an accident, but what possessed him to leave the house at that very moment? And does the group of Britishers that arrives soon afterwards, claiming to be the ranch owners, have anything to do with it? Before long, a second death takes place and it’s unquestionably murder this time. Old Red dons the metaphorical deerstalker and starts sleuthing around to find clues.
The end result of all this is admirable. Hockensmith manages to construct a perfectly solid, fairly-clued mystery that is a delightful homage to Sherlock Holmes. What makes this most fun is that Holmes is treated as a real person, so the setting is not the historically accurate 1893, but a fictional universe right out of a Western. As for the Brits who show up, they’ve had past experiences with Holmes, and you won’t find a more Holmes-hating bunch than this! 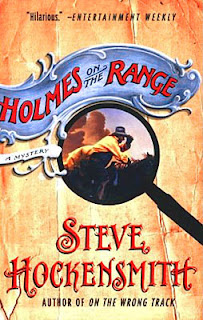 The Western elements do not suffer from the mystery, nor vice versa. This is simply a wonderful hybrid between the two genres. The McPhersons are clearly up to no good from the start, but you’re not quite certain what they’re up to until Big Red and Old Red figure it out. But there are plenty of suspenseful scenes along the way, particularly near the end, where it seems like a climatic gun-battle showdown is inevitable.
In fact, there’s only one complaint I have about the book, and it’s got something to do specifically with the finale. The killer does not act like any normal person would at the deductions of Old Red, as he explains everything. In fact, the killer brings about his own downfall. Psychologically speaking, it seems too incredible, and Hockensmith’s half-hearted explanation is not particularly convincing. (Remember that I use “he” merely out of convenience, and the killer could quite easily be a man, a woman, or as an outside bet, a three-legged chicken.)
Overall, though, Holmes on the Range accomplishes just what it set out to do: it’s a delightful tribute, a solid and fairly-clued mystery, and it gives you some good, Western-style colour. Big Red and Old Red are simply delightful characters and make for sympathetic protagonists. The McPhersons are obviously villains of some sort and are suitably nasty without becoming caricatures. All things considered, Holmes on the Range is a triumph, managing to merge the Western with mysteries very well indeed.