Written by Patrick
“Truth, I may remind you, is stranger than fiction.”
“Spare me that tedious lie. You are quoting the only paradox which unimaginative people ever succeeded in inventing. And it is not true. It is insidious propaganda on the part of cheerless souls who want to make fiction as dull as truth. … What we need is some fearless iconoclast who will come out boldly against this damnable tyranny, saying, ‘Fiction is stranger than truth.’”
— Henri Bencolin, The Lost Gallows 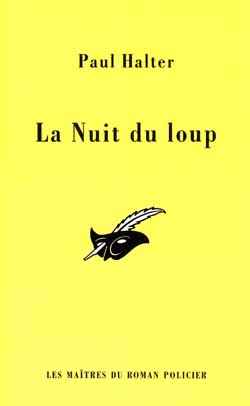 La Nuit du loup (The Night of the Wolf) is thus far the only short story collection written by Paul Halter, and it was also his first book to be translated and published into English (back in 2007). It’s a wonderful collection that brings together all sorts of stories: some set in modern day, some starring Dr. Alan Twist, and others featuring Owen Burns. Halter has written several other short stories that have been uncollected thus far, and there’s enough to warrant a second collection, which would be most welcome.
However, it’s important to emphasize that I have read and will be reviewing the original French edition of La Nuit du Loup. There are several differences between the English translation and the original book. For one thing, the French edition contains only nine short stories (although the back cover claims it’s eight), while the English translation features ten. One of the original short stories was dropped because it was impossible to translate into English, and two others were added to bring the total up to ten: L’Abominable bonhomme de neige (The Abominable Snowman) and Le Spectre doré (The Golden Ghost). Finally, the order of the short stories is fairly different, although both English and French editions end with the titular short story.
So with that said, here are my thoughts on the various short stories in the original French edition of Night of the Wolf:
L’Escalier assassin (translated as The Tunnel of Death)
This is a very short story to kick the collection off, taking place in modern day Le Havre. A ruthless business mogul, Bertrand Charpie, takes a ride on the world’s longest escalator. Police are guarding both ends of the tunnel, and some even accompany him on the escalator. About midway through the tunnel, a gunshot sounds and Charpie slumps to the ground, mortally wounded. But nobody has entered or left the tunnel, and witnesses swear they didn’t see the killer! Finally, what makes this all the more strange is that the escalator is apparently cursed, for Charpie is the third person to die in these apparently impossible circumstances!
The story is extremely short, and there lies its greatest virtue and weakness. The short length is appreciated because while the impossible crime has a good solution, it probably wouldn’t have survived a much longer length. The story somewhat relies on the reader having little time to think things through before the solution is revealed.
However, precisely due to the short length, some of the story’s elements seem extraneous—like those things that pass themselves off as characters. I struggled to remember anybody’s name or personality. This story makes Halter’s position quite clear: he is writing puzzles, not Great Literature. And although I entirely approve of this approach, in this story, it seems somewhat excessive—like you’re reading a summary of a story instead of the story itself.
These reservations aside, I did enjoy the story very much and found the solution elegant and simple.
Les Morts dansent la nuit (translated as The Dead Dance at Night)
Already the second story is a major improvement, as Dr. Alan Twist intervenes to solve the case. (By the way, Twist is devoid of his partner, Inspector Hurst, for most of the stories.) It’s all about an old family curse— after a seemingly random and inexplicable murder, laughter is heard coming from the sealed crypt where the victim has been buried. When the crypt is opened, some coffins are discovered scattered about the room, some coffins are empty, and others contain two corpses in all-too-suggestive positions!
The solution to this mystery is of a sort I usually find uninspired and unexciting, but Halter adds a fresh twist of his own that really left me enthusiastic about the story. Again, the solution to the impossibilities is brilliantly simple, and the characters are far more interesting this time around. (The stories after the first one are longer, and so the problem of faceless and absolutely unidentifiable characters no longer recurs.)
Halter also does a nice job of creating atmosphere with his plot— the events are of such a bizarre nature that atmosphere seems to create itself around them!
Un Rendez-vous aussi saugrenu (untranslated; An Appointment as Ludicrous)
This story was left out of the English translation because it is frankly impossible to translate. It relies on a misinterpretation of the French language that simply can’t be translated into English without building the story around something else.
That being said, this is not an impossible crime story, nor is it a cryptic “dying message” clue. It takes place in modern-day France, with the main characters being Hélène Monge and her husband Philippe. Hélène calls her mother and hears distorted voices on the phone that sound like a pair of lovers intent on doing something. She hears them several times while calling her mother over a few weeks, and a seemingly inexplicable phrase pops up: “un rendez-vous aussi saugrenu…” (“an appointment as ludicrous…”)
It’s not a particularly brilliant story, but it’s agreeable enough, featuring a good final twist that I only saw coming a few sentences prior to its arrival. The only potential objection is that the murderer could have gone about their business so much more easily— but that’s something that I honestly don’t care about. If you’d like a fuller plot summary to find out just what the ending is and why it’s so untranslateable, feel free to contact me. 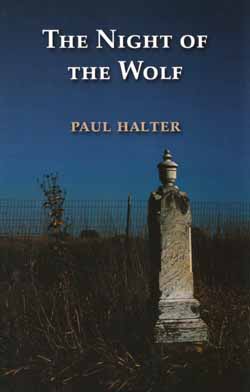 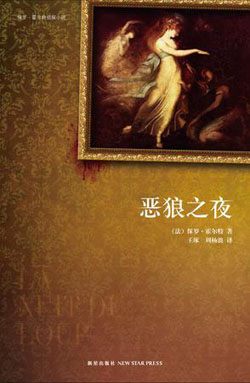 La Nuit du loup (translated as The Night of the Wolf)
This is a non-series story, and I can’t exactly determine the time period it takes place in. It could be happening anytime between the 1920s and modern day, since there’s nothing specific to pin it down—no mentions of the internet, cell phone plans, or that new-fangled technology of television. This is another murder in which the killer leaves no footprints in the snow, and the solution is solid.
However, it’s the ending that is most interesting, as Halter manages to nicely fool his readers, most of whom will make an assumption about the story early on, only to have the tables turned neatly at the finale. The only problem? This final twist is clever, but the introduction to the twist is a little bit forced. I’m personally more than willing to ignore this minor problem in an otherwise solidly-constructed tale.
***
Overall, what can be said about La Nuit du loup? Paul Halter works very well in short stories, using a pure puzzle-plot approach but coming up with excellent atmosphere at the same time. At the top of his game, he’s capable of creating masterpieces like The Flower Girl, and there’s no real dud among these stories— even the poorer tales are interesting and fun enough! All this makes me wonder if Halter will release another collection— there seems to be enough material, and it would be most welcome!
La Nuit du loup (The Night of the Wolf) is a very good short story collection that aficionados of the impossible crime simply can’t afford to miss! It’s a good representative sample of Halter’s work, bringing together tales that take place in modern France as well as stories starring his regular detectives, Owen Burns and Dr. Alan Twist. I highly recommend it!

Curious to find out about those two other stories? For reviews of The Golden Ghost and The Abominable Snowman, click here to read!