Killed in the Fall 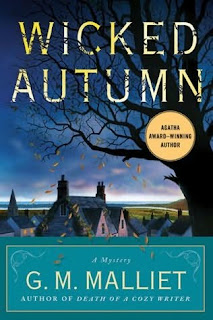 G. M. Malliet is a relative newcomer to the mystery-writing scene. Ironically, considering how I recently wrote a rant against the word “cozy”, the title of her first mystery novel was Death of a Cozy Writer. I have yet to read it, but I got a hold of her newest novel, Wicked Autumn.
It is a new series for Malliet, so I haven’t missed out any backstory. The detective is Max Tudor, a former MI5 agent who found God and became a priest in the Anglican Church. He is now vicar of the church at Nether Monkslip, a supposedly idyllic English village in the countryside… which of course is the perfect place for a murder!
The victim was one Wanda Batton-Smythe, and you couldn’t find a much more despicable person on this little planet of ours. She presented a bluff, energetic façade to the world, playing the part of the Grand Dame, complete with a condescending attitude to those she considered her social inferiors. Naturally, she manages to get on everybody’s nerves right before a big autumn festival, and as a result, she gets herself killed. Wanda was famously allergic to peanuts—even people who barely knew her knew about this. She carried an epinephrine injector with her wherever she went as a precaution, and yet, she succumbs to death via her allergy. But why is the injector not in her handbag? And how did someone manage to convince her to eat something with peanuts in it?
This is the premise of Wicked Autumn, and it’s an excellent read. The author manages to update the traditional English village setting very well— I was somewhat reminded of Robert Barnard. The “traditional” mystery is not dead as some might have you believe— Malliet manages to convincingly bring it into the 21st century, with online shopping, Facebook, and Twitter making their presence known. Throughout this, she pays homage to Agatha Christie, who is mentioned several times—each time on a positive note. It’s a refreshing change from the condescending attitude Christie gets far too often from the likes of Gilbert Adair or P. D. James.
And yet… I have major problems with the ending. It’s fairly clued, and in some ways it’s quite brilliant. But I cannot help but notice with unease that this kind of ending has been done over and over and over again in recent years. I really am in a sticky situation here, because if I say too much I might spoil the book, which would be unpardonable. I will only say it’s about the motive for the crime. It’s become frankly alarming in some ways— but I can’t go into it without giving major hints away.
However, not everyone will share these reservations. Personally, I thought the book started sagging in terms of pace after the victim’s funeral. The revelation of the killer could have been better handled. As it is, the characters end up sounding melodramatic over the reveal. I didn’t really get a sense of the terror of finding out that this supposedly-friendly face was really a mask for dark emotions.
Finally, I wasn’t entirely happy with the way the tale wraps up. The murderer is caught and eliminated, and suddenly life in the village is perfect again. I thought the book would take another route— so often throughout the text, our attention is brought to the fact that even when the killer is caught, someone is still dead. Even Max Tudor reflected that his supposed Garden of Eden actually had a snake in it the entire time and he failed to notice it. But once the killer is removed, everything goes back to normal and everyone is happy, with a few potential romantic interests introduced for the Vicar (who, of course, is a dashing, handsome young man). In some ways, it’s a more orthodox ending than the ones Agatha Christie is accused of penning.
However, much of this is mere niggling on my part. I genuinely enjoyed this book from the first page-- the writing style is superb (although I noted a curious tendency to compare people with animals...). I appreciated a character list, and was absolutely enamoured of the gorgeous map of Nether Monkslip. Overall, G. M. Malliet shows freshness and potential. I look forward to seeing what more she will offer in the future.