That is the question... 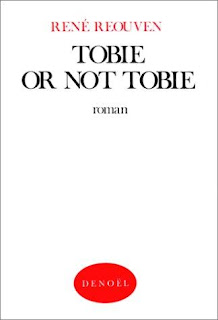 The title of René Reouven’s Tobie or not Tobie could be translated as Tobias or not Tobias, but to be honest, it ruins one of the best bilingual puns I’ve ever heard and certainly one of my favourite titles. So I will go with the name “Tobie” throughout this article to describe the central character of Reouven’s book. It is constructed around an idea that captured my imagination the very moment I heard of it: Reouven takes the Biblical Book of Tobit and rewrites it as a mystery! And Archons of Athens— Reouven even manages to construct the mystery around an impossible crime!
The Book of Tobit lends itself excellently to this rewriting process. A quick summary of the plot might be in order: Tobit, an elderly man, is blind, and despairs that his son Tobie is twenty and still not married. He sends Tobie to Media to collect a large sum of money he loaned to a cousin named Gabael. And while he’s there, there’s a nearby town where a young woman named Sarah lives. She’s twenty years old, beautiful, and unmarried! What a happy coincidence! So Tobit hires a guide for Tobie, a man going under the moniker of Azariah.
Tobie gets to Sarah’s place right enough, having separated from Azariah so that the latter can go to collect the debt while he woos the girl. But the parents don’t seem particularly happy to have him there. It seems that the demon Asmodeus is involved somehow, and the sound of a flute playing a haunting melody at night-time is not the friendliest omen. The tensions slowly rise higher until finally, Sarah’s father relents and tells Tobie just what he’s up against: Sarah has been married seven times already and every time, the demon Asmodeus kills the bridegroom before the marriage can be consummated. He does this in front of all the other men, conjuring up terrifying visions from Hell itself until the groom (and he alone) drops dead from fright. Was it poison? Out of the question-- all the guests ate and drank the same things...
Yes, friends, it’s an impossible crime! However, this revelation occurs at about the 160 page mark of a 200 page book. The book takes time to build up the atmosphere, ratcheting up the tension until it reaches the breaking point. The characters are wonderful, particularly Tobie— you very much want to see him conquer Asmodeus. The impossible crime is a brilliant scneraio and René Reouven does not fail, coming up with a simply wonderful solution. And although you don’t find out what the impossible crime is until late in the book, there are plenty of mysterious events building up to it! There isn’t a dull moment to be seen.
The mystery is solidly constructed, and it uses the source material excellently. I haven’t read the Book of Tobit in a long time— I remember the last time I read it was after listening to Anthony Boucher’s Sherlock Holmes radio play inspired by this book. However, I remember what it generally was about, and Reouven does a spot-on job handling his mystery and keeping it all within the framework of the Biblical text. The characters at one point even muse at how, if their story was written, it would be changed— and these changes are very much what the Book of Tobit is like! In a way it does what Paul Halter’s Le Crime de Dédale did with Greek mythology— you can see the legends being born in front of your eyes and see how it would one day become the version we know now. It’s a wonderful process. 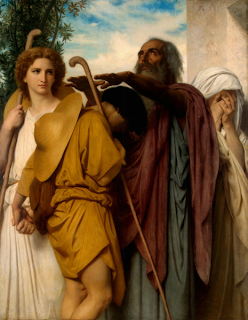 But the most delightful thing about Tobie or not Tobie is the style. Reouven has great wit and originality— he writes this book as though it was a translation of some ancient scrolls, and he implies that these were written by the prophet-detective Daniel. He takes some good-natured cracks at Paul Claudel, a French poet and dramatist who was a devout Catholic. He also makes the text deliberately anachronistic several times, tipping his hat in various directions. “Elementary, my dear Azariah,” Tobie at one point tells his companion. Azariah confides in Tobie that he believes “there are more things in heaven and earth than are dreamt of in our rabbi’s philosophy”. When they separate, Azariah tells Tobie to beware on the night where eleven men dine and Sarah’s room is yellow— leaving Tobie to wonder just what the mystery of the yellow room is. And my personal favourite moment of them all comes near the end of the book, where Sarah’s father laments to Tobie about his daughter’s curse:

“All seven of them died, Tobie! They are dead: Amnon, son of Saul; Eliyahu, son of Dan; Uri the Galilean… Moshe of Kimmashah is dead. Yohanan the traveller is dead. Rosencrantz and Guildenstern are dead.”

To this, Reouven adds an apologetic footnote from the translator, who regrets to report that he cannot find out where those last two names came from. And heck, those are just a few of the references I caught— I’m certain that there are more that flew over my head.
To sum up, Tobie or not Tobie is a small gem, a veritable masterpiece from René Reouven. It is a wonderfully witty book that I thoroughly loved, and its cleverness as a mystery only helps matters. I highly recommend it, but sadly, this book isn’t available in English. If I had the talent and permission to do it, I’d have a crack at translating it myself, but that doesn’t seem feasible. Reouven is a French author who is largely forgotten today—although he’s still alive, he hasn’t written anything in a while!
I seem to have brought up the cause of neglected foreign authors on this blog quite often—generally in the English-speaking world, we’re brought to believe that the only French-language practitioner of the genre was George Simenon! But to get back to Reouven— this book has me sold. I’m willing to call him a true genius and I look forward to reading more of his books. I’ve already got one purchased, en route to my house…