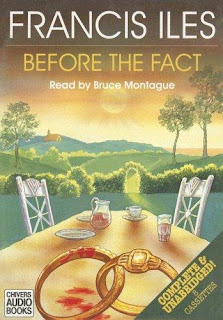 I love the stuff written by Anthony Berkeley, and was looking forward to reacquainting myself with his work. I decided to go with something written under his Francis Iles pseudonym: Before the Fact, which was adapted into the Hitchcock film Suspicion. However, I hesitate to call Before the Fact a mystery at all, since the only mystery is just how stupid the heroine is.

Lina McLaidlaw marries Johnnie Aysgarth, despite the warnings from her family, particularly her father, who says the Aysgarth clan is rotten stock. But Lina believes she can rehabilitate little Johnnie— he’s her little child and she so desperately wants what’s best for him. Of course, unknown to her, Johnnie is a murderer, something we find out in the very first paragraph of the book. And at first, Before the Fact is an excellent portrayal of an insecure woman desperately clinging to a love affair, no matter how unhealthy and unwise it is for her. That lasts about eight chapters.


Then something happens. To start Chapter 9, a major plot twist has occurred, and it seems like Lina is falling in love with another man. He’s kind to her, attentive, genuinely loves her, and sacrifices a lot for her. He’s the perfect man for her, but that doesn’t matter. Johnnie shows up on stage, smiles at her, and she drops everything to follow him. And why? Because… well, God alone knows. (Does this sound familiar? By gum, it's the plot of Twilight!) It is from this point forward that Lina develops Idiot Heroine Syndrome, doing and saying the most extraordinarily stupid things. When she finds out Johnnie is a murderer, she actually obtains physical proof of this crime. What does she do with it? Why, destroy it (of course!) and convince herself that it wasn’t really murder! Johnnie isn't the one who belongs in the loony bin...

It’s obvious this is a woman only good for dying. Anthony Berkeley was a misanthrope in general, but his misogyny is more pronounced than usual. He seems to genuinely hate Lina, and he takes some absurd pseudo-psychology laughably seriously. Words fail me to describe the sheer stupidity of the ending. Hitchcock had incredible talent and could turn the silliest stories into compelling films— I’m sad to see that this book is one of those silly stories. As Curt Evans put it, the book is in need of a subtitle: The Story of a Very Stupid Woman Who Deserved All She Ultimately Got, Really.

Am I being too harsh on the character? I don’t think so. She’s a manipulative little pig who puts on the innocent victim act, and by the end of the book, becomes so incredibly dense that all I wanted to do was slap her. Berkeley might as well have written in a scene where she muses:

"Oh, but Johnnie wouldn't kill me. Not he. He loves me. Of course, there was that one incident a week ago where he asked me for money and I sharply refused to let him have it. And he's been ever so furtive since then. He was most pale last night when I caught him sharpening the knives in the kitchen. So silly of my darling little Johnnie to worry about having done that wrong. I’ll simply have to take the cost of the knives out of his allowance and put further financial strain on the poor boy. Though of course for the life of me I can't understand why he didn't just let Cook do it. Darling, darling Johnnie! He loves me. Of course he does! Why wouldn’t he? He’d never murder me!" 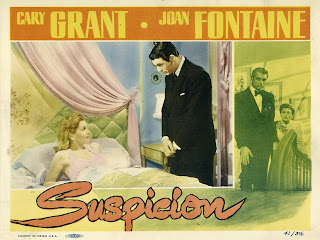 This of course means that the book is a masterpiece by Julian Symons standards. I quote from Bloody Murder: “Iles’ method is so much more subtle [than Mrs. Belloc Lowndes’ or R. Austin Freeman’s approach to the inverted murder story] that his work is really non-comparable. … The slow revelation of the villain’s character in Before the Fact is beautifully done. … The only criticism that might be made of these outstandingly original books is that they have just occasionally an air of contrivance out of keeping with their generally realistic tone.” (Bloody Murder, 2nd ed.) To be fair to Symons, he includes Malice Aforethought, which might deserve this praise. But Before the Fact is silly nonsense. There’s nothing realistic about Lina’s complete stupidity. The writing is as subtle as a Jean-Claude Van Damme movie, minus the fun factor. There’s nothing slow about the revelation of the villain’s character—we know it from the start. And what’s this ever-so-occasional air of contrivance? You mean that little part of the book after the eighth chapter? Oh yes, completely negligible, that. Truly, there is no comparison between this book and R. Austin Freeman’s The Singing Bone. Unfortunately, I disagree entirely with Symons about the reason for there being no possible grounds for comparison.

If you want a clever inverted murder story, skip this book. The beginning is grand—the opening paragraph, in fact, is practically perfect. But that’s the problem— the book is so good to start with that its crash is all the mightier. The characters, particularly the insipid Lina, become annoying. You begin to hope the killer just gets on with it already. The ending is the antithesis of cleverness—this is far below Anthony Berkeley’s usually high standard. I’m just glad I found this book in a library—I’d be most upset if I actually paid to read it. For my part, Henry Wade’s Heir Presumptive and the stories in R. Austin Freeman’s The Singing Bone remain the best inverted murder stories I’ve ever read. I recommend them any day over this poorly-done mess. For the life of me I can’t understand this book’s high reputation.