Sherlock: The Hounds of Baskerville 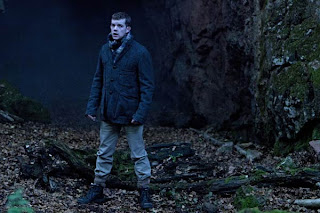 As The Hounds of Baskerville opens, Sherlock Holmes is bored. He is pining for a proper case, when a man named Henry Knight drops in for a visit. As a young boy, he claims, he witnessed his father getting ripped apart by a monstrous hound on Dartmoor. He ran away in terror, although no corpse was ever found. After years of therapy, he has returned to the crime scene… but this does nothing to quell his terrors. Although Sherlock is initially sceptical, he becomes very interested after his visitor tells him, “Mr. Holmes, they were the footsteps of a gigantic hound!”
Thus, Sherlock Holmes and Dr. Watson are on the case, going to Dartmoor. There, they get onto the scent of top-secret military experiments at a place called Baskerville. And I won’t say any more about the plot. The writer is Mark Gatiss, who previously penned the somewhat-disastrous The Great Game. (One of these days I’ll watch it again and give it a proper review to voice all my issues with that episode.) However, this time Mark Gatiss outdoes himself. The Hounds of Baskerville, inspired by the infamous The Hound of the Baskervilles, is a pure delight from start to finish. 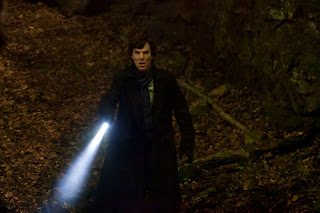 Plot-wise, I have very few complaints. The atmosphere is marvellously built up through intriguing events, and they are so strange that at one point, they even get Sherlock to doubt his senses! That’s right, the Infallible Detective fears that this time, he might be onto something he cannot handle! This was the one of the most intriguing features of the episode, because we get to see the Holmes/Watson relationship develop a bit through this conflict. It isn’t the same old “You have no feelings!”/”I don’t care” exchange. You feel as through the partners really got to learn something about themselves here.
And yet, Holmes is remarkably slow tumbling to a few facts. He comes up with a theory to explain the mysterious occurrences which does have a touch of mad genius in it… but at the same time, a far simpler solution screamed out at me almost at once, and it took Sherlock until the finale to tumble to that! But we’ll just chalk this up to his being frightened out of his wits at one point.
The plot does a very good job at playing around with the original Hound of the Baskervilles. The Stapleton character is replaced with a woman scientist, for instance. But again: even if you think you know where the plot is generally headed, a twist will be thrown into the works that suddenly makes you realize you have no idea where it’s going at all. Also, there are plenty of fun references to Sherlockiana—look out in particular for a really nice touch about Sherlock wanting something about seven percent stronger than tea. (There’s also a great reference to The Adventure of Black Peter, and the plot seems to incorporate elements from one of my personal favourite tales, The Adventure of the Devil’s Foot.) 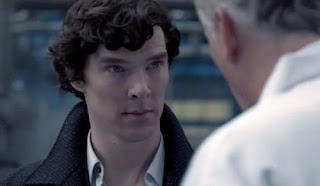 However, the plot does have a few holes in it. The solution fails to explain a few things, and in general, the story is so action-packed that the resolution feels rushed, with the final ten minutes being crammed full with backstory. The twist is not particularly well-clued, but to be honest, the show succeeds so brilliantly in one aspect that I’m perfectly willing to forget all about that.
What could this aspect possibly be? In a word: atmosphere.
Atmospherically, this is hands-down the best Sherlock episode to date. It blows anything any other episode had to offer out of the water. Dartmoor has never looked this beautiful and this sinister at the same time. The photography is simply stunning—the fog effects are particularly good without becoming heavy-handed. When I think of Dartmoor, I can picture the lonely moors, both majestic and eerie, as the howl of the hound of the Baskervilles pierces through the night. (Unfortunately, I’ve never been there—or to England, for that matter.) This impression was firmly implanted in me by The Hound of the Baskervilles, and I was glad to see the episode deliver perfectly on this front. 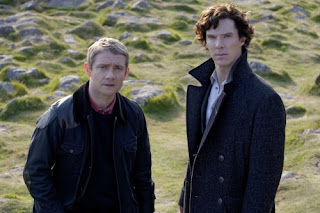 The acting is of course good, and we get a lot more of Lestrade in the second half of this episode, which is really great fun. I particularly loved the scene where he first shows up in Dartmoor. Meanwhile, the finale again features the rascal Jim Moriarty, as he is released from a prison cell where he has scratched Sherlock’s name everywhere. It sets up the third episode, The Reichenbach Fall, extremely well.
Overall, The Hounds of Baskerville is, if anything, a major improvement from A Scandal in Belgravia. This is mainly due to the episode’s brilliant atmosphere, which makes for a far more engaging experience than Scandal. (I’ll admit it, I didn’t particularly like A Scandal in Bohemia the first few times I read it. On the other hand, I have always positively loved The Hound of the Baskervilles.) The screenwriting is very solid and in general, this episode is a lot of fun. There are plenty of intriguing moments, and although the ending does feel somewhat rushed, it also leaves you ultimately satisfied at the outcome.