Come and be killed 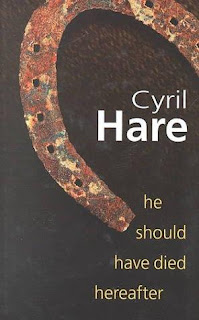 I have never before read a novel by Cyril Hare, which was the pseudonym of one Alfred Alexander Gordon Clark, an English judge who was also part of the esteemed Detection Club. He was admitted to the club in 1946, and the snippets we get of him in Curt Evans’ fabulous pamphlet Was Corrine’s Murder Clued? made me extremely interested in the author. Some basic research (how did we ever survive before Wikipedia?) reveals something interesting: he read History at New College, Oxford, where he once heard William Archibald Spooner say in one of his sermons “now we see through a dark glassly”. Granted, it’s no “we’ll have the hags flung out” (flags hung out), but it’s an amusing scene to picture nonetheless.
And so that leads us to He Should Have Died Hereafter, which has also been published under the title Untimely Death. In this book, the Pettigrew couple (Francis Pettigrew is apparently a recurring character) go on holiday to Exmoor. It’s a charming little place, which of course means that murder is just ‘round the corner. Francis recalls that when he was a child, he stumbled over a dead body on the moor. But now he’s a man, so he should be able to exorcise this demon—he decides to do so by walking over to the place where the incident occurred… only to stumble over another dead body.
But when he returns to the scene of the crime later, the body has disappeared, only for a body to reappear at the same spot a few days later. Is this a case of precognition? Hallucination induced by memories of the past? A wacky story invented on the spur of the moment to have something to tell the grandkids? A lie that someone decided to make into reality? 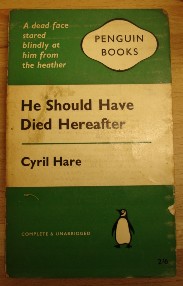 Well, not all of these options were seriously considered, but the idea of precognition and a potential murder in the past are interesting ones that would resurface in Agatha Christie’s Sleeping Murder in very similar circumstances.  It makes me wonder if Dame Agatha, one night at the Detection Club, talked to Cyril Hare about the plot she had stowed away for Miss Marple’s grand finale. Certainly, it’s possible—this was Hare’s last written book and there was plenty of time between his admission to the Club in ’46 and this book’s publication in ’58.
But if so, Agatha Christie unfortunately won this round. The situation, while imaginative, is never quite explored to its full potential. There are a few reasons for this—the book is remarkably short (my copy is under 200 pages) and almost half of it is concerned with complex legal details that emerge from the case. This doesn’t allow for much uncertainty and wondering about the nature of Pettigrew’s experience. After some initial considerations, we quickly are told that only this-and-that could have happened and we’re plunged into the legal details. And while the author seems to extract malicious delight in the complications he’s tossed into the legal system (given more credibility due to his real-life legal experience)  I couldn’t help but feel what a marvellous opportunity he missed. 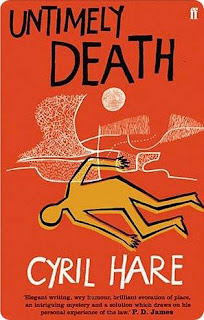 But that doesn’t mean the story is bad. I’ve certainly seen better, but it’s a nice little book (though by no means a masterpiece). The ending’s got a nice dash of irony to it and the book’s remarkably short length makes it easily read. Hare could have easily padded things out, but he keeps things simple and to the point, and that’s the book’s most endearing quality. Unfortunately, one part of the mystery is never adequately explained and the overall solution to the murder is more or less average. This is no The Tokyo Zodiac Murders!
Overall, He Should Have Died Hereafter is very, very good at first: the situation it throws at the reader is genuinely mystifying. But Hare doesn’t take enough chances and instead of the book feeling like an original piece of craftsmanship, it’s somewhat forgettable. Agatha Christie took this plot idea and ran all the way with it in Sleeping Murder, which I would personally recommend over this particular book.