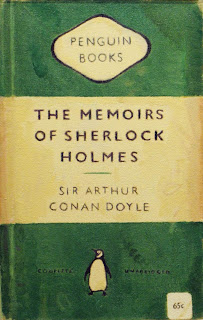 Over the last few days at work, I’ve had the enormous pleasure of listening to The Memoirs of Sherlock Holmes as read by the brilliant Derek Jacobi. I listened to Jacobi reading The House of Silk last year and absolutely loved his reading: he made Dr. Watson sound intelligent and charming, and not a buffoon like Nigel Bruce admittedly did. (That doesn’t mean I dislike Nigel Bruce as Watson, I just don’t think he’s anything like the character Sir Arthur Conan Doyle wrote about.) I don’t think you could possibly find a better actor than Jacobi to read these stories aloud. He makes Sir Arthur Conan Doyle’s prose come vividly to life, so that each story, even if forgettable, becomes a fantastic auditory experience.
I was well-familiar with these tales and so I was reacquainting myself with them. I found that I enjoyed them all very much after all this time. Truly, Sherlock Holmes is a timeless character— I am revisiting these stories yet again, and every time, I find that I love Conan Doyle’s world! The stories only seem to get better with age.
There is one omission here: The Adventure of the Cardboard Box, which in the U.S. is included in His Last Bow, was not among the tales I listened to, so I decided not to review it. For other reviews of Holmes shorts, please take a look at The Puzzle Doctor’s site, In Search of the Classic Mystery Novel, where the doc is discovering the Holmes tales and finding out just how much he’s been missing out on!
Silver Blaze
This is the classic Holmes story, with that unforgettable “curious incident of the dog in the night-time”. Here’s what happens: a horse trainer, John Straker, is found dead, killed by a blow to the skull. A horse, the titular Silver Blaze, goes missing at the same time. The main suspect is one Fitzroy Simpson, but damning as the case against him is, Holmes is unconvinced of his culpability…
If you haven’t read this story, you’ve seriously missed out. This is one of the gems of the Holmes canon, and definitely not one to ignore! 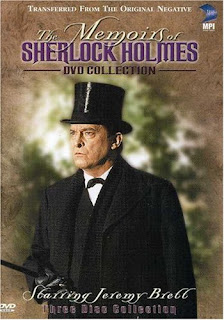 The Adventure of the Yellow Face
A Mr. Grant Munro comes to Holmes in a panic. His wife is deceiving him about something—certainly she is eager to keep it a secret. All Mr. Munro knows for certain is that her secret has something to do with their mysterious new neighbours… and when he looked through a window into that house, he was confronted by an unnatural, sickly yellow face.
This is an unremarkable adventure (Holmes and Watson count it among Holmes’ failures, after all), but for the first time I’ve realized just how well Conan Doyle manages to convey Mr. Munro’s breakdown. He does love his wife and wants to trust her, but her deception leaves him with nothing but a sickening, gnawing doubt. The ending is remarkable for its anti-racist stance… and keep in mind that this, folks, was 1893.
The Stockbroker's Clerk
Mr. Hall Pycroft is Holmes’ client and the titular stockbroker’s clerk. He comes to Holmes about a strange series of events that happened to him when he was preparing to take a new job with a firm of impeccable reputation. Long story short, he went to a new employer, and some of his boss’ actions leave him with an odd feeling. He comes to Holmes to get advice over it.
The story is more or less a rehash of an earlier tale, but it’s not as obvious as, say, Adrian Conan Doyle’s The Deptford Horror (which is a carbon copy of The Speckled Band). It manages to feel different despite being very, very similar.
The Gloria Scott
Holmes tells Watson the story of one of his very first cases, when, as a college student, he made friends with one Victor Trevor and was later invited to spend some time at Trevor’s home. Victor’s father puts Holmes’ deductive skills to the test and encourages Holmes along the path he would take to becoming a detective. But as Holmes prepared to leave, an uninvited stranger made his appearance at the house… and somehow, these events led to Mr. Trevor dying of fright upon getting a seemingly unintelligible message! 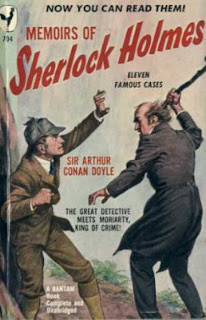 What makes this story remarkable is the backstory (which unfortunately you cannot guess for yourself). It is an extremely engaging segment, and it easily makes up for the story’s flaws. Because they are present— the story contradicts itself most severely at one point. Another problem for me is that the key to the strange message is rather uninspired— this is no The Dancing Men.
The Musgrave Ritual
The Musgrave family has a solemn ritual passed down over the generations, but its meaning has been lost over time. It seems to be some sort of riddle. Reginald Musgrave, a one-time acquaintance of Holmes, comes to the great man for help after his maid and butler disappear shortly after reading the ritual.
This is a fine tale, and the secret behind the seemingly-nonsensical ritual is far more inspired than The Gloria Scott was. It’s Holmes at his finest.
The Adventure of the Reigate Squire
Sherlock Holmes needs a vacation, and Dr. Watson takes him near Reigate in Surrey to recover his strength. But of course, some criminal decides that it is the perfect opportunity to commit a crime. (It must be the same bloke who insists on murdering someone on board a train/plane/boat in which Hercule Poirot is travelling.) The crimes started as burglary, but the burglar faced unexpected opposition in the last house he targeted and ended up shooting the coachman, William.
This has always been one of my favourite Holmes tales. The thief, whoever he is, seems to take the most illogical things possible from the houses he burgles. The set-up always intrigued me, and the payoff is simply grand, as Holmes uses some risky tactics to draw the culprit out into the open. 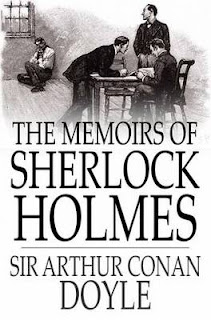 The Adventure of the Crooked Man
Another one of my all-time favourites, this story seems to be a locked-room murder of sorts (the room is not completely inaccessible, though), when Colonel Barclay is killed behind locked doors, with his wife lying unconsciously beside him. A search, however, fails to turn up the key, and Holmes deduces some more sinister doings.
This solution always fascinated me. The backstory behind this murder is full of the drama that we love to read about. You get to feel the emotional pain that was at the root of this problem, and Jacobi’s reading of this tale is simply delightful. He brings the backstory vividly to life and I personally highly empathised with the culprit in this case.
The Resident Patient
Mr. Blessington and Doctor Trevelyan have had a business agreement that has worked wonders for the both of them, but Doctor Trevelyan cannot help but notice Blessington’s odd jumpiness of late. The man insists that his room has been disturbed, and all this coincides with the mysterious visit of a Russian nobleman with cataleptic fits.
The story is at its grandest when Holmes does his deducifyin’ (to quote that great sage, Old Red Amlingmeyer), but ultimately, the one problem with this one is that you’re never given the clues you need to solve the case yourself. Well, this is the major criticism levelled at Doyle, but the concept of fair play was not around yet, so I can’t seriously take him to task for it. It’s still a solid story.
The Greek Interpreter
Here we meet Sherlock Holmes’ brother Mycroft, a fat man who is even more brilliant than his brother, but who hasn’t got the energy to apply himself as a private detective. He brings Holmes’ attention to the case of Mr. Melas, an interpreter who specialises in Greek, who was whisked away one night and forced to take part in a mysterious interview…
This is a story worth reading for Mycroft’s scenes alone—which is good, since again, the ending isn’t among the most fairly-clued of the Holmes tales. The entire point of the matter is only revealed to Holmes after the adventure is over and done with. Holmes can only vaguely guess at the nature of the plot, which is fine, but which doesn’t completely exclude other explanations until the guess is confirmed. 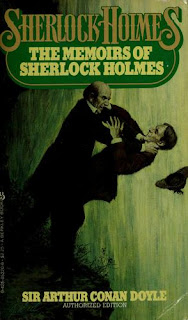 The Naval Treaty
England and Italy have signed a secret treaty (that’s no so secret anymore), and the French and Russian embassies would love to get their hands on it. And it seems that a thief has done just that, whisking away the document after announcing his presence by calmly ringing the bell in the room in which the treaty was kept!
Holmes does a fine job deducing the truth, especially as to why someone would ring the bell. Doyle does a good job hiding clues in the narrative that collectively point to the truth. The story also refers to the mysterious adventure of the second stain, a story that was eventually chronicled by Dr. Watson.
The Final Problem
This is the infamous story that introduced Professor Moriarty. There’s not a mystery to be found, it was simply Doyle’s way of killing of Holmes. Kill him he did in a most dramatic fashion. First he gave him an archnemesis (Moriarty) and then had them duel it out on the brink of the Reichenbach Falls. It’s a solemn goodbye to Holmes, but its impact is somewhat lessened when you know the great man will return in The Empty House.

As a concluding note to this review, I've always loved this promo for the Granada Holmes series starring Jeremy Brett. The particularly-epic montage starts at around the 54 second mark.