Written by Patrick
Six little Indian boys playing with a hive;
A bumblebee stung one and then there were five.
Patrick: I am a Catholic and my faith is important to me— wait, don’t turn that dial! Religion plays a major part in my reasons for disliking the character of Emily Brent. Miss Brent was likely not a Catholic—the odds are that, like Agatha Christie, she was Anglican. (Why do I say this? Well, we’re in 1930s England. I have a feeling she wasn’t Baptist.) And yet Miss Brent manages to get her faith so completely and entirely wrong. Emily Brent embodies everything people dislike about religion— she loves her Bible and quotes from it as though she were shellin’ peas. When Mr. Owen’s voice accuses her of bringing about the death of one Beatrice Taylor, she says nothing until everyone falls silent, waiting for her to speak out.

“Are you waiting for me to say something? I have nothing to say.”
The judge said, “Nothing, Miss Brent?”
“Nothing.” Her lips closed tightly. … “There is no question of defense. I have always acted in accordance with the dictates of my conscience. I have nothing with which to reproach myself.”

That right there is Miss Brent in a nutshell, and it is scary. Now, as a Catholic, I hold the belief that the Bible is inspired by God— and yes, I have seen Penn and Teller challenge that claim (IMO, they miss the whole point, but let’s not turn this into a theological seminar). And yet the Bible, a book with such great wisdom and beauty, has been used many times to justify the most horrid things. Miss Brent manages to do just that.
Oh, to be sure, these quotes are in the Bible; it’s not like Miss Brent makes them up. But she never seems to understand their meaning, and to be honest, we could all selectively quote the Bible until the cows came home. For instance, I’ve heard the death penalty justified by quoting Jesus’ words to Peter: “all they that take the sword shall perish with the sword”. Such interpretations miss the whole point of the passage— it is part of Jesus’ message to Peter that no, violence is not the answer, and that he should put the sword away.
But I digress. Let’s get back to Miss Brent—she loves quoting her Bible, and she tends to love the doom-and-gloom imagery: “The heathen are sunk down in the pit that they made: in the net which they hid is their own foot taken. The Lord is known by the judgment which he executeth: the wicket is snared in the work of his own hands. The wicked shall be turned into hell.” Doesn’t that make for cheerful reading before dinner on the first night?
But she’s not done there; after Mrs. Rogers dies in her sleep, Miss Brent is quick to give the Hand of God credit:

One word fell from Emily Brent. It fell hard and clear into the listening group. “Conscience!” she said. … “You all heard [the accusation]. … I think that that accusation was true. You all saw her last night. She broke down completely and fainted. The shock of having her wickedness brought home to her was too much for her. She literally died of fear.”

How can this woman be so callous over the death of Mrs. Rogers… and yet when Phillip Lombard cheerfully admits his responsibility in the deaths of 21 Africans, she “glanced at him in sharp distaste” and later confides to Vera that “Black or white, they are our brothers.”
While Lombard’s crime is the most sickening in the entire book, Miss Brent’s is a close second. The scary thing is that she genuinely feels no remorse for her actions—to her, she acted strictly in accordance with her Bible and so she has no reason to feel guilt. Beatrice Taylor, we learn, was a servant in her employ, who made some bad decisions and wound up pregnant. Miss Brent threw her out of the house: “No one shall ever say that I condoned immorality.” Beatrice Taylor’s story ends in tragedy: “The abandoned creature, not content with having one sin on her conscience, committed a still graver sin. She took her own life. … Yes, she threw herself into the river.” 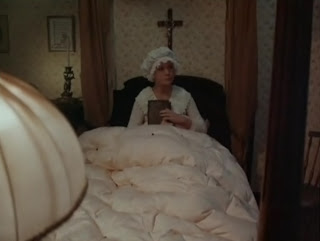 Miss Brent reveals the nature of her crime to Vera Claythorne, who is understandably horrified (and it’s possible that her horror is compounded by the fact that drowning was involved—a sort of subconscious act of self-hatred for her own crime):

“What did you feel like when you knew she’d done that? Weren’t you sorry? Didn’t you blame yourself?”
Emily Brent drew herself up. “I? I had nothing with which to reproach myself.”
Vera said, “But if your—hardness—drove her to it.”
Emily Brent said sharply, “Her own action—her own sin—that was what drove her to it. If she had behaved like a decent modest young woman none of this would have happened.”
She turned her face to Vera. There was no self-reproach, no uneasiness in those eyes. They were hard and self-righteous. Emily Brent sat on the summit of Indian Island, encased in her own armour of virtue. The little elderly spinster was no longer slightly ridiculous to Vera. Suddenly—she was terrible.

Miss Brent tragically gets the crux of her faith wrong—her faith is built on the doom-and-gloom imagery, fuelled by a fear of winding up in Hell if she as much touches sin with a yardstick. That is why the concept of showing mercy to a sinner seems to surprise her so. Why should she have been nice to poor Beatrice and support her? If she did so, then that would mean she condoned Beatrice’s immorality, and that would mean she’d go straight to Hell in a handbasket! But when Jesus walked the earth, didn’t he say: “They that are whole have no need of the physician, but they that are sick: I came not to call the righteous, but sinners to repentance.” It’s ironic; when Miss Brent is confronted with the possibility that she poisoned Mrs. Rogers, she replies indignantly: “Is common humanity a criminal offense?”
There are undoubtedly many people out there who share Miss Brent’s firm conviction that no matter what, it’s the girl’s fault and she should go straight to Hell. But I must emphasize that this is not the message of Catholicism or Christianity in general. We don’t go to church on Sundays to get a kick out of condemning homosexuals to burn in Hell. We admit that we sin and we ask God to forgive us and give us strength to repent and not sin any more. It’s not about pointing out the weakness of others and then painting a lovely picture of ourselves— it’s about presenting ourselves to God the way we are. (Some people come strictly for the bake sales, but that’s another story.)
The point is, Emily Brent takes a religion of love, tolerance, and mercy and she twists it into a weapon. Self-righteous to the extreme, she manages to be the embodiment of all the stereotypes people associate with Christianity. And yet… Miss Brent is not conscience-less like Anthony Marston. She begins to go crazy when Mr. Owen decides to bump her off, writing in her journal that “THE MURDERER’S NAME IS BEATRICE TAYLOR.” When she helps out at breakfast, she recalls a terrible dream she had: “Last night she had dreamed of Beatrice—dreamt that she was outside pressing her face against the window and moaning, asking to be let in. But Emily Brent hadn’t wanted to let her in. Because, if she did, something terrible would happen…”
The 1987 Russian adaptation of the book, Desyat Negrityat, brings this dream to life but changes it into a hallucination. Miss Brent, while getting ready to fall asleep, sees Beatrice Taylor at her window, and in a frenzy she finally throws her Bible through the window before declaring that “the murderer’s name is Beatrice Taylor”. The scene is extremely intense and part of the superbly-crafted atmosphere… it is also part of the only adaptation that gets the character right to my mind. All her life, Miss Brent’s faith has been based on the kind of preaching that Wallace Shawn’s character used in the film Heaven Help Us: a whole list of threats of what will happen to her in the afterlife if she so much as permits the presence of sin near her. This causes her to retreat behind her Bible and she does something terrible because of it. But she’s human after all. She may have convinced herself that she did nothing wrong, but she really does know she is to blame. The realization that she was indeed wrong to do what she did makes her toss the Bible through the window in fury and in doubt… While Emily Brent does not throw her Bible through a window in the novel, I feel that in the book, uncertainty begins gnawing at her mind: “Did I really do the right thing? Is this really the kind of faith God asks of me?” And just before Mr. Owen murders her, Miss Brent has one final vision of Beatrice Taylor, risen from the river and dripping wet, slowly approaching her. Does she know she will be murdered? Does she accept this as her punishment? The bee stings her before we can get a clear answer…
***

Curt: On rereading And Then There Were None I found Emily Brent one of Christie’s best-realized characters.
But then she should be.  She’s Miss Marple gone wrong!
Take away the humanity and genuine compassion under Miss Marple’s restrained and ladylike Victorian demeanor and you are left with acidulated Emily Brent, in whom genuine Christian charity has withered (if it ever existed).
Throughout the four-and-a-half decades that Miss Maple appears in Christie novels, the great spinster detective kindly and conscientiously trains an endless series of ignorant lower class girls into responsible and competent members of society.  We may or may not think this is rather a self-serving way to look at it (she is getting service from them after all), but there seems no doubt to me that the way Christie presents these girls to us, they would be in sad shape without Miss Marple to look out for them.
But what does Miss Emily Brent do when her servant, Beatrice Taylor, “gets into trouble”?  Does Miss Brent show compassion and help her?  No!  Rather, she casts Beatrice out, precipitating her suicide.
When Miss Brent learns of the alleged crime of the Indian Island servant couple, the Rogers, she is horrified:

“You all heard.  She was accused, together with her husband, of having deliberately murdered her former employer—an old lady.”

For Miss Brent this hits right at home.  Servants must at all costs be made to keep their divinely allotted place in the social order.
Miss Brent is the daughter of “a Colonel of the old school,” Christie satirically notes, who “had been particular about deportment.”  Her father’s daughter, Miss Brent always sits bolt upright; she does “not approve of lounging.”
As Patrick notes, Miss Brent thinks of herself as quite religious, but it is a religion of form—of deportment—over substance (genuine charity).  Miss Brent will never bend her principles to help someone.  Form always comes first.
And here Christie once again challenges those who insist she is an uninterestingly conformist and invariably conservative writer.  She has taken a traditionally sympathetic (if sometimes gently mocked) character in fiction of this era—the prim spinster who knows her duty—and made her into a quite unsympathetic person with a cold, cold soul.