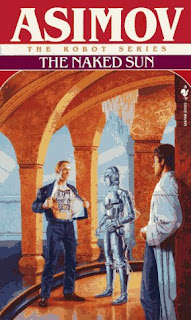 In The Caves of Steel, Isaac Asimov created a fabulous and fairly-clued mystery, set three thousand years into the future. Civilisation has been forever changed due to space colonisation and the invention of the positronic brain. And as wonderful as the book was, I had a complaint with it: its false solutions were devilishly ingenious while the correct solution was quite obvious! But I eagerly returned to Round 2 with Asimov, as Elijah ‘Lije’ Baley and R. Daneel Olivaw return in The Naked Sun.

The Outer World planet of Solaria is an idyllic one, but one where humans are outnumbered by robots by about ten thousand to one. There is a grand total of twenty thousand Solarians, all living in isolation from one another. They maintain contact through “viewing”, a technology rather like Skype (without connection problems) where everything is in 3D. The practice of “seeing”—that is, being in actual physical contact with another person—is considered dirty and rather scandalous. On this world, a murder takes place, when a man is found dead on his spacious estate. His wife lies unconscious in the room and the only other entity present is a robot whose circuits have gone haywire. 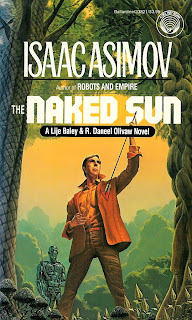 This is due to the First Law of Robotics, which states that a robot cannot harm a human being or allow a human being to come to harm through inaction. Thus, the theory goes that the robot witnessed the murder, and when it was unable to prevent the crime, its positronic circuits went to pieces. Which means of course that the wife is the killer, right? Well—things aren’t quite that simple… The weapon she must have had with her (if she was guilty) is nowhere to be found…

The Solarians have no official police force, and so they ask Earth’s government to send Lije Baley to Solaria, after they heard of his success in the Spacer murder chronicled in The Caves of Steel. Lije reluctantly goes and is given a mission on the side to spy on the colony and bring back as much information as he can about them, since Earth knows next to nothing about the Outer Worlds. On the way, Lije is joined by R. Daneel Olivaw, and the investigation begins. 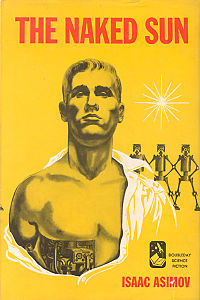 Personally, I found this book a delight. Asimov had plenty of fun creating a futuristic universe in The Caves of Steel, and he really lets his imagination fly when creating Solaria. What disturbs me is how the social criticism constructed into the Solarian universe is remarkably pertinent to our times today. Nowadays, it’s almost unimaginable to not have a cell phone with Facebook, Skype, Gmail, and everything else imaginable enabled on it. Personal contact is a lot rarer, with people disappearing into the technological universe of sites like Facebook and Twitter. The idea of going without the Internet or texting, for even a short period of time, is practically blasphemy. In fact, our modern society uncannily resembles that of Solaria.

As for the mystery, it is a genuine improvement over The Caves of Steel for a few reasons. For one thing, now that the universe has been solidly established, Asimov can play with it and its conventions a little bit more. The false solutions are all every bit as tricky as those in The Caves of Steel. But the real triumph comes when the true solution is unveiled— it is a surprising knockout punch that seems to come out of nowhere. And it is just as fairly clued and relies just as much on the futuristic, sci-fi elements Asimov includes in the story. People often assume that the Golden Age mystery plot is incompatible with our own technological universe, but with technology far more complex than ours, Asimov manages to create a wonderful mystery. 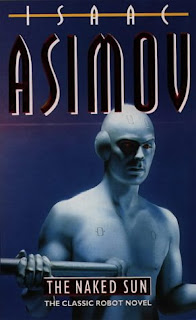 The characters and setting are lovingly portrayed and you really get to know them inside and out. Lije Baley is completely unfamiliar with the world into which he’s been tossed, and so you get to learn just as much about the universe as he does. And you get to see him grow as a person, overcoming some of his most ingrained fears (or at least learning to fight them off). It’s a most fascinating journey for any sci-fi fan as much as a mystery fan.

Overall, The Naked Sun is a wonderful mystery and science fiction novel. Isaac Asimov’s imagination is just fascinating, and the mystery angle is a genuine improvement over that of the first instalment in this series. Asimov invents an ingenious impossible crime and then turns around and explains it all away. And the setting, characters, atmosphere, etc. are so wonderfully portrayed, it’s unlikely you will forget them any time soon! And all this is pulled off without the book getting too long or overstaying its welcome. It balances its various elements with all the grace of a trapeze artist, and is a wonderful read through-and-through. I hesitated whether to apply the “masterpiece” tag to The Caves of Steel—there’s no such hesitation over The Naked Sun. I highly recommend it.