Die Hard with a Vengeance

Written by Patrick
“Richard Stark writes a harsh and frightening story of criminal warfare and vengeance with economy, understatement and a deadly amoral objectivity—a remarkable addition to the list of the shockers that the French call romans noirs.”
—Anthony Boucher, New York Times Book Review 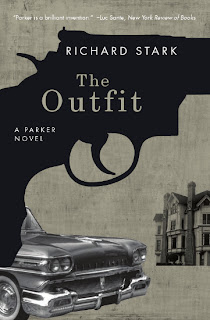 The Outfit now knows that Parker has a new face. They don’t have a very pleasant relationship of late – for details see The Hunter and The Man with the Getaway Face. And so, when The Outfit begins, a hired assassin is sent to kill Parker, interrupting him in bed. Furious, Parker extracts information from the killer, and from that moment on, he declares war on The Outfit. First, he goes after the guy who fingered him and sent for the assassin. Next, he’ll hit The Outfit where it hurts most: in the wallet.

This is how he’s going to do it: he spends time writing letters and visiting old colleagues in the business. He lets them know what the score is. Historically, professional thieves leave The Outfit’s operations alone. They don’t bother The Outfit, and vice versa. But now, The Outfit is overreaching itself, making trouble for Parker. And Parker’s friends don’t necessarily have a huge loyalty to Parker, but they know just how easy it would be to pull off Outfit heists. Many of them have been walking around with plans in their head for years. Now they have an excuse to pull the trigger and hit The Outfit for all they’re worth.


It seems that the expression “the third time’s the charm” applies in particular to Richard Stark (Donald E. Westlake). Under the Westlake name, his third Dortmunder novel is the best I’ve read thus far in that series. Now, as Stark, this third instalment is the best of the Parker series thus far! A lot of things come together to make this the case. In the first place, the narrative structure is really strong. In my last Stark review, of The Man with the Getaway Face, I pointed out a technique that Nick Jones has dubbed the Stark Cutaway. It works like this: first you see events from the POV of Parker’s quarry, then suddenly they see Parker emerge from the shadows, gun in hand. Then, you flash back and go through these events all over again, this time from Parker’s POV.

The Outfit uses a brilliant variation on this. First, we see the head of The Outfit, a man named Bronson, as he receives the news that a professional thief has just hit one of The Outfit’s operations. Then, we flash back and see how the robbery evolved and just how smoothly it ran. After returning to Bronson for a bit, we get treated to a whole series of robberies, one after the other: ­bang-bang-bang! You see the preparation that went into the job, and in some perverse way, you almost admire the ruthless efficiency and professionalism of the thieves.

But what’s Parker up to all this time? First, he returns to New York and he hits The Outfit personally. Then he finds a man named Fairfax—he had an encounter with him in The Hunter. He extracts some information from Fairfax and next, he strikes a sneaky deal that ensures that The Outfit will eventually leave him alone. If Bronson doesn’t see reason, his successor turns out to be a far more reasonable man. We’ve already seen Bronson before, and he’s a treacherous double-crossing devil like Mal Resnick, only he has a lot of money to back himself up. Somehow, you feel that if Parker’s forced to remove Bronson, the world will not suffer because of it. 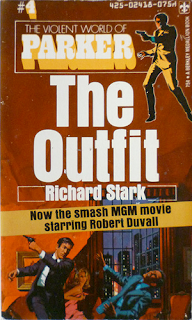 Parker, as always, is a fascinating central figure. I personally don’t approve of his actions—I certainly hope nobody out there does!—and there’s one scene in particular where he brutally attacks a dog. It’s hard to take. Sometimes, Parker barely seems human. His sense of humour is very sardonic and can be rather cruel. The only person he’s ever really had feelings for is his late wife, and now that she’s dead, he wants to forget she ever existed. He has no real friends—the only reason so many people tackle The Outfit is because they have an excuse—there’s no friendship-fuelled motive, except arguably from Handy McKay, a thief who appeared in The Man with the Getaway Face. But he never crosses the line into becoming a truly disgusting person like Mike Hammer. He isn’t sadistic for the sake of sadism. Every one of his actions is ruthlessly fought out and he is without morals or scruples. He is guided by nothing but iron-clad logic—he won’t kill you if he doesn’t have to, but if he decides he does have to, he won’t think twice about it. It’s a scary picture.

All things considered, The Outfit is a hell of a great book. It has plenty of action and detail when you see all those consecutive robberies. Parker is as always fascinating, and the stark atmosphere just draws you right in. And here’s another reason these books work so well—they’re short. Parker doesn’t lecture the reader, the author doesn’t moralize or philosophize. The world is the way it is, so let’s work with what we have. The prose is lean, mean and to the point. It’s remarkably efficient and tight writing, and practically every sentence is needed for the structure to work as brilliantly as it does. This isn’t a detective story, it’s a thriller—and a brilliant one at that!