The Further Adventures of Bigfoot 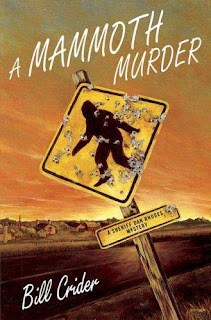 When Bud Turley strolls through the doors of the Blacklin County police station, Sheriff Dan Rhodes knows that something is up. His suspicions are confirmed when Bud shows him an enormous tooth he has found, suspecting that it belong to Bigfoot. Rhodes is sceptical, but Bud insists that Rhodes must guard the tooth until a palaeontologist from the community college can examine it.

But this quickly turns from a semi-comic tale of a hunt for Bigfoot into a sordid affair involving murder. Bud’s best friend Larry Colley is found dead in the woods (although—and this threw me completely off guard—the book insists that it’s Bud who’s found dead). The man who discovers the body insists that he saw Bigfoot nearby, and that’s proof enough for Bud. Off he goes posting ads on the Internet, and before long the Bigfoot brigade shows up, determined to find the mythical creature. Meanwhile, the tooth Bud discovered turns out to be part of a prehistoric animal and a research team is quickly formed to find the rest of the skeleton.


Needless to say, A Mammoth Murder is a very interesting book, combining a lot of very fun plot ideas into a coherent whole. Dan Rhodes investigates an intriguing homicide that might be connected to the disappearance of a child many years ago. Murder quickly strikes again, and before long the county is under siege by presumably-recurring characters that I’ve never seen before, so I can’t really comment in-depth. In general, the book does a fine job balancing out more comic elements with the dramatic ones and the mysterious ones. It blends together quite nicely indeed, and the clueing is decent, which is more than I can say for most modern mysteries.

I liked Dan Rhodes as a character. He’s a decent kind of guy, and he wants to do his job as best as he can. He can’t stand loose ends in his cases, which is why he gets even more interested in this one when connections are made to an old, unsolved disappearance. He can be tough if he has to be. But he’s a good man at heart who won’t pull out his gun to get the information he wants.

Yet, that being said, there’s nothing shocking about the ending. By a certain point, the novel seems to have turned into a police procedural, and although there is a rather thrilling chase sequence attached, the surprise ending just never felt too masked for me. We’ve seen this type of motive before, we’ve seen this type of murderer before. It didn’t feel like anything particularly ground-breaking or revolutionary.

And unfortunately, with all the plot and characters, sometimes I just felt lost, swamped in a sea of characters I couldn’t quite identify. There are a lot of characters who seem to be doing nothing in this book, and there are some minor subplots that generally head nowhere, used only for comic relief. It just feels odd to have these plot threads out in the open and unresolved by the end.

Although I enjoyed A Mammoth Murder personally, I’m not entirely sure if I’d recommend it to someone who has never read one of Bill Crider’s novels before. I finished it about a week ago but could only get to writing a review today, so I’m afraid my review is a lot more vague than it might otherwise have been. (My apologies to Mr. Crider if I’ve been unfair, especially since I did like the book.) It seems to be an average book. Is it brilliant? No. Is it terrible? No. But it is readable and reasonably entertaining.