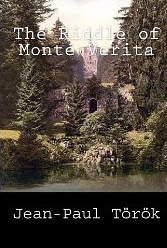 According to legend, Monte Verita was the site of an impossible disappearance from a grotto. But that happened so long ago—surely the tale must have been embellished. After all, nothing like that could possibly happen in real life, right? Besides, it is 1938 and we’re attending a worldwide mystery convention—if something were to happen, there are many amateur sleuths on hand to solve the case!

One of these mystery addicts is Pierre Garnier, newly wed to his wife Solange. Pierre is something of an expert in the mystery genre and he is delighted at the opportunity to meet so many enthusiasts. But as fun as it is to participate, some of the members get involved in quarrels with each other. Finally, one member accepts a challenge to duplicate the feat of the impossible grotto disappearance… but before he can pull this feat off, he himself is murdered in a locked room!

It’s a good thing the police saw the guilty party at work: a woman was seen stabbing the victim and then closing the blinds… but the description of this woman oddly resembles Pierre’s new wife Solange, who has never really told her husband anything about her past… and just before his death, the victim confided in Pierre that his wife was a multiple murderess…


That is the plot of The Riddle of Monte Verita, a novel originally written in French by Jean-Paul Török and now available in English thanks to the efforts of translator John Pugmire. The book was written as an homage to the locked room mystery, and in particular, the work of John Dickson Carr. There are several impossibilities to be found in this book and several solutions are proposed to these impossibilities. Some directly reference solutions in other famous mystery novels, such as Six crimes sans assassin by Pierre Boileau. Others mock the mystery genre’s conventions—no self-respecting novel, for instance, would include a secret passageway… but what if— 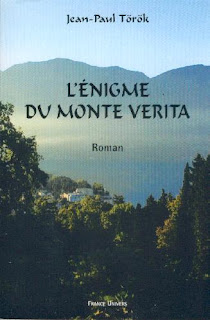 That should give you a good idea of what to expect in this book: a spirited romp of a locked-room mystery that is a love letter to the work of a master of mystery. I enjoyed the characters, which traditionally speaking were John Dickson Carr’s weak points. But the main characters here are a group of academics that delight in theorizing about the problem posed to them by the murderer. Their discussions are just wonderful to follow along. Then there’s the hero, Pierre Garnier, and his wife, who are typical of Carr’s protagonists: the adventurous young man in love with a woman who may or may not be what she claims to be. Their love for each other is put through a severe trial as the murder investigation marches on… And finally, when the detective shows up on scene, he combines the best of Carr’s famous creations: Dr. Gideon Fell and Sir Henry Merrivale. If you switched the text to refer to “H.M.”, I wouldn’t be able to tell the difference— the detective is every bit as delightfully mad as the Old Man. At times, it briefly felt like I was discovering a lost Carr novel.

John Pugmire is to be commended for his translation, which conveys every ounce of this book’s fun successfully. It’s very clear and the editing is likewise quite good. It does justice to M. Török’s book, and the author also deserves an accolade for coming up with a wonderful homage to the work of John Dickson Carr. His love and admiration for Carr’s work are obvious from page one, and his plotting would have earned the approval of the Master himself.

All in all, you owe it to yourself to discover The Riddle of Monte Verita. It’s a good, old-fashioned puzzler, solidly constructed and most enjoyable. In particular, you will appreciate this book even more if you are familiar with the work of John Dickson Carr.