Things that go bump in the night... 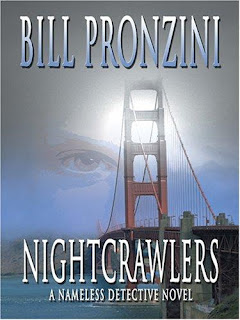 Bill Pronzini’s Nameless Detective is back in action in Nightcrawlers! As the book begins, Nameless is summoned to the death bed of Russell Dancer, a once-infamous pulp magazine writer whose promising career went down the drain. (Dancer appeared in the novel Hoodwink and apparently on at least one or two other occasions.) Dancer wants Nameless to deliver a message to Cybil Wade, Kerry Wade’s mother and the woman Dancer has had a crush on all of his life. Nameless decides to comply with Dancer’s wishes, but he immediately finds strange resistance on the home front from Kerry, who insists that he should inform Cybil right away although Dancer asked Nameless to wait until he died—so that Cybil doesn’t see him in his current state, he says.

Meanwhile, Jake Runyon gets involved in another case when his long-estranged son Joshua gives him a phone call. Jake’s son basically hates his living guts, and Jake hopes that this call might be a sign that a reconciliation is in the works. The news is far grimmer—Joshua’s boyfriend has fallen victim of two predatory gay bashers. Moreover, he isn’t the first victim—and the attackers are only getting more vicious with each new victim.


While all that is going on, Tamara Corbin decides she wants to get in on field-work, and she commences a series of stake-outs to locate a deadbeat dad who has skipped out his alimony payments. But when she sits in her car, watching, she notices something very odd happening across the street, and this puts her on the track of a child kidnapper who has just captured another victim.

As you can guess, Nightcrawlers is really rich in story, and it’s a very good book. Then again, it’s Bill Pronzini—how can it not be good? In particular, the Jake Runyon storyline is once again the best one in the book. Runyon acts the part of the typical Lone Wolf private eye, in the tradition of fellows like Lew Archer and Philip Marlowe. He does a lot of legwork and interviews all sorts of people before he finally grasps hold of a lead in the hate crimes. It’s a very well-handled storyline. 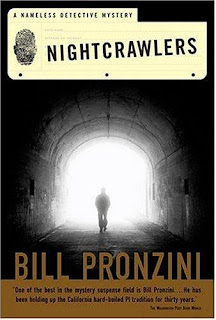 Unfortunately, the same cannot be said for Tamara’s storyline. The child kidnapper is not the best of Pronzini’s characters— we are treated to plenty of monologues from his psychotic point of view and unfortunately, they begin to run rather dull. I was also somewhat disappointed to see the emergence of another pet-peeve of a cliché: the psycho killer who gets angry and then gets a major headache/migraine (here, a stabbing pain behind the eyes). Am I the only one who sees all too clearly an author’s intent when I see that kind of characteristic? Anyhow, I didn’t end up hating these monologues— after all, Pronzini’s is a fine talent— but because the character is so unoriginal, the monologues just get dull after a while. Pronzini does a far better job with monologues from a killer’s POV in Savages and Schemers.

The child-kidnapping storyline only gets interesting near the end, where Tamara engineers an escape that goes very wrong, and before long, everyone is stalking each other in the woods. It makes for a rather exciting climax.

As for Nameless, well, the only real mystery he investigates this time around is Tamara’s sudden disappearance. The storyline that begins with Russ Dancer’s last request will reappear in later books such as Savages, but he seems to be relegated to more of a cameo role in this book. Jake Runyon and his case take center stage.

Overall, I enjoyed Nightcrawlers, but it isn’t my favourite Nameless novel. Nameless doesn’t play a particularly major role in the book’s events; he’s more of an observer until Tamara disappears. And even then Jake Runyon’s case takes precedence. Is it a bad thing? No, not really. Jake Runyon’s case is a really good one and there are a lot of personal issues at stake for Jake. But Nameless’ passive role and a boring psychotic figure in the other major storyline conspire, between themselves, to bring the book’s enjoyability down a notch or two.