Written by Patrick
Clayton Rawson is a pretty well-known name from the Golden Age of Detective Fiction. A magician and a great friend of John Dickson Carr’s, Rawson gave us one of the all-time great debuts of detective fiction when he invented his detective, The Great Merlini, and took him on a wild journey as Merlini had to solve the mystery of Death from a Top Hat, a complex affair involving multiple impossibilities that The Great Merlini explains rationally. Not only is it a great debut, I consider it one of the greatest detective novels of all-time. Rawson followed that classic up with three further novels and a series of short stories. But darn it all, those short stories are so hard to find! 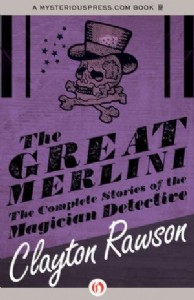 But then, last week, while browsing my Facebook account, I suddenly noticed an update from MysteriousPress.com! I gasped and made sure I was reading it right. Clayton Rawson was back in print! All his novels have been resurrected into e-books, but that wasn’t enough for the folks at MysteriousPress.com. By some miracle worthy of The Great Merlini himself, they managed to reprint Rawson’s Don Diavolo stories… as well as all the short stories starring The Great Merlini! And thus, I instantly went to Amazon and purchased three books, one of which is entitled The Great Merlini: The Complete Stories of the Magician Detective.

Would Clayton Rawson be able to match the ingenuity of Death from a Top Hat? Were these stories really worthwhile? How would The Great Merlini handle the impossible disappearance of a person from a phone booth, a challenge that the great John Dickson Carr failed miserably (in Scotland Yard’s Christmas)? What about those short-short stories? Reader, I present you my critiques of the stories found in this brand new e-book:

From Another World
John Dickson Carr and Clayton Rawson challenged each other to solve a puzzle: how could a murderer strike his victim when the latter was inside a room that was sealed with tape? Carr’s solution to the riddle is found in He Wouldn’t Kill Patience—one of his best books and one of his neatest solutions—and this is Rawson’s own variation. Andrew Drake, a rich man with a newfound obsession with ESP, is found dead in a room sealed with tape. The conditions were set up in order to make sure nobody could tamper with the results of an experiment—but the fellow really should have known better than to lock himself into a room in such a bizarre way.

This is quite simply one of the greatest short stories of all-time. The impossible crime is brilliantly worked out: the deception that makes the whole thing work has an idea of brilliant simplicity at its core. To top all this, the story is laced with a wonderful sense of humour that makes it such a joy to read: every single word is a delight. I envy those who will be reading it for the first time.

Off the Face of the Earth
Bela Zyzyk claims to be an alien, but his appearance seems quite ordinary. But there are some unsettling things about him: no relatives can be traced anywhere, and his gift of clairvoyance seems genuine! But judge for yourself: he tells a chorus girl, Dorothy Arnold, that she will disappear within a week, and even gives her the precise time as 4:20 PM. One day, Dorothy walks out of her house… and is seen for the last time at 4:18.

Inspector Homer Gavigan doesn’t like that and so hauls Zyzyk in front of a judge. But Zyzyk insists that the judge himself will soon be whisked off the face of the earth! Gavigan doesn’t like that: Judge Keeler is corrupt and a case is being built up against him. Will Zyzyk’s words warn the judge to skip out of town? Police surveillance is increased at once, so that the judge is being observed at every moment of the day. But when the judge enters a phone booth, observed by two policemen, he never exits. When the policemen lose their patience and look into the booth, they discover that it is empty, and only the judge’s bloody glasses are left behind!

This is another masterpiece from Rawson. It’s another story idea that both he and John Dickson Carr tackled. Unfortunately, Carr’s attempt to explain the phone booth disappearance is far from satisfactory—in fact, it’s a downright mess. Happily, Clayton Rawson rises to the challenge. This is a grand puzzle with another brilliant impossible crime trick and one that at long last answers the riddle of the phone booth disappearance. What are you doing still reading this? Go out and discover the puzzle for yourself!

Nothing is Impossible
Aliens have landed on the planet Earth! More specifically, they have landed in a locked room, where they managed to kill one man, strip another of his clothes (while keeping their arrangement intact) and then turn invisible and walk through walls, having left convenient footprints behind. It’s unfortunate that the Great Merlini is not a believer, because he proceeds to prove that a far more ordinary agency was behind this locked-room murder.

The locked room problem is a decent one and the story is, as always, very fun to read (and often quite funny). There’s just one problem: the killer’s plan has an almost fantastic quality of complexity about it. To give effect D, the killer had to perform stupefactions A, B, and C. Although these stupefactions have decent solutions of their own, tied together they feel somewhat unnatural. Merely a good story, then, though it has potential to be one of the greats.

Final Round of Stories
Miracles—All in the Day’s Work is a story in which Inspector Gavigan becomes the key witness to a locked-room murder. The only problem is the locked room trick instantly becomes apparent, to the point where you wonder why the police even needed The Great Merlini’s assistance in the first place. The next story, Merlini and the Photographic Clues, is a decent one in which a man seems to have been in two places at the same time… but experienced readers won’t have much trouble figuring out howdunnit. The last story in the collection, The World’s Smallest Locked Room, is the least interesting of them all. It’s a story about a poisoning attempt with only two suspects, but what boggles me the most is how the witnesses instantly knew that they would be dealing with an “impossible” poisoning, since the impossibility is never made clear. Is it because everyone was eating the same things? But that’s nonsense— although they all had coffee everyone put different things in it. And so the final story is an unfortunately underwhelming way to conclude the collection.

And there you have it folks, that was The Great Merlini. How was it? Well, I say it’s well worthwhile. If the only stories here were Off the Face of the Earth, From Another World, and Nothing is Impossible, the book would still be worthwhile! But you get plenty more stories, many of them short-shorts that I don’t want to describe in detail for fear of ruining the plot. Although they tend to be on the decent side, the final round of stories is an underwhelming way to end the collection. The Great Merlini’s greatest challenges make these stories seem like a cinch for the Great Man to solve in his sleep.

Still, it’s a wonderful read and I highly recommend it. I bought a Kindle edition and was very satisfied with it. (You can find more formats here.) The editing, proofreading, and layout were wonderful. I had an easy time reading the text and wasn’t distracted by OCR errors. And most important of all, I discovered once again just why I loved Clayton Rawson’s work so much in the first place. I loved getting to see The Great Merlini one more time, and although I still have a novel to go—No Coffin for the Corpse—before saying my last farewell, it was a pleasure to see him at the top of his game for a few short stories.

If you’ve never read Clayton Rawson’s story, this is a good place to start—although my personal recommendation is to start out with that masterpiece Death from a Top Hat. Golden Age detection doesn’t get much better or more ingenious! And MysteriousPress.com have brought it back as well!