Batman and the Man Who Laughs 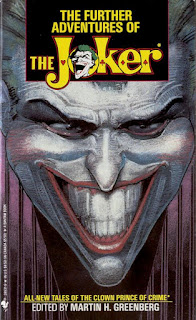 One day, as the citizens of Gotham City are watching the news, the broadcast is interrupted. A cloud of static invades the screen, and when it fades out, the Joker, that Clown Prince of Crime, is sitting there smiling. And then he makes a truly astonishing announcement: he is retiring from the criminal world! He says that he will sorely miss Gotham, and that it has been good to him, but that he now wishes to go away and live a nice, quiet, peaceful life.

Bruce Wayne – a. k. a. Batman – doesn’t buy it. Neither does Commissioner Gordon. In fact, all of Gotham City mistrusts the Joker’s announcement. But it seems he’s been true to his word! His gang has been disbanded, the Joker has apparently left town, and nothing unusual happens for several weeks. Phew! It’s a good thing that things are nice and peaceful for the arrival of a travelling art exhibition! Or is the Joker keeping quiet in order to plan out his attack on the exhibit?


This all happens in The Joker is Mild, a short story by Edward D. Hoch collected in The Further Adventures of the Joker. This is one of those Batman short story collections edited by Martin H. Greenberg, and Hoch has already made an appearance in this series as the author of The Pirate of Millionaire’s Cove. This time, instead of creating an original villain, Hoch places the Joker head-to-head against Batman. And the results are wonderful!

The story is extremely short at only 10 pages. And somehow, Hoch manages to turn out a wonderful, fairly-clued mystery! I don’t want to give anything away here, but for much of the story I was dreading that this would turn out to be a flop. The solution seemed so obvious: surely Hoch couldn’t have written something so simple? As it turns out, I was right: Hoch manages to introduce a nice last-minute twist that throws everything into a different perspective. It’s very neatly done, and the clues are excellently placed. 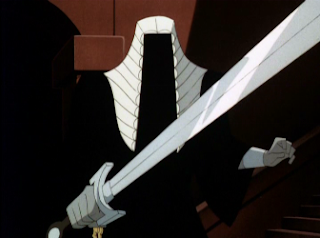 The only real complaint that I have is that the Joker didn’t really feel essential to this story. You might as well have substituted any Batman villain into the tale because the mystery never really has any Joker-ish elements to it. In fact, one of the main clues might have been more at home with the Riddler cast as the villain— although, to be fair, the Riddler would have made things a bit more tricky with this one clue. Still, it’s just a nitpick and most readers probably won’t mind. I love the Joker and the Riddler just as much, so it’s not as though I have a particular preference, but for a cerebral detective story, the Riddler seems to be the most natural fit of all the Batman villains. Though, as I discussed yesterday, Robert Sheckley was inches away from creating one with the Scarecrow as a major element. So really, you could create a mystery with just about any Batman villain. In fact, the last episode of the infamous Batman: The Animated Series is called Judgement Day, and it’s a terrific little mystery in which a masked vigilante targets Gotham’s criminals. While the twist has been done to death (seriously, Hollywood needs to stop using it), I think the episode’s variation on it is good enough to warrant some attention.

So, back to Hoch and The Joker is Mild: it’s a nice little mystery: short, sweet, and it leaves you hungry for more. It shows Hoch’s mystery-writing genius at its finest.

What I love most about these stories is seeing a bunch of authors united in a common passion. These writers seem like genuine fans of Batman, though there is no section of the book to confirm it. (That would have been great—seeing all these writers talk about why they love Batman, who their favourite villains are, etc.) And they all have plenty of fun putting their unique spin on the legend of the Caped Crusader. We're all just fanboys at heart.

Note: Isaac Asimov's Batman story seems to be an adventure of the Black Widowers! At least the subtitle claims it is "Black Widowers #61"... So yes, this series manages to connect to classic detective fiction in yet another unexpected way!


Other reviews in this series:
The Pirate of Millionaire’s Cove by Edward D. Hoch
The Sound of One Hand Clapping by Max Allan Collins
Death of the Dreammaster by Robert Sheckley