A Literary Life For Me 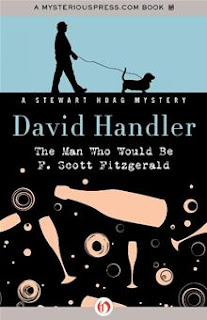 Stewart Hoag, known as ‘Hoagy’ to his friends, was once a best-selling boy-wonder author. Now, his marriage has fallen apart and he hasn’t got much to show for his stardom. So when he’s offered a job mentoring/collaborating with the current literary boy-wonder, Cameron Noyes, he accepts the job. But it’s not quite so simple. Cameron is addicted to cocaine, has a problem with booze and women, and seems haunted by his past. But as time goes on, Hoagy learns more and more about this idol of the literary world…

… and the tensions rise as Hoagy investigates the cutthroat publishing industry. Many ugly incidents occur which leave the reader wondering what’s going to happen when the tensions boil over into violence. And sure enough, somebody falls to their death, an apparent suicide. But Hoagy is not entirely satisfied and soon enough the police begin to entertain similar suspicions. It’s up to Hoagy and his dog, Lulu, to investigate matters and sniff out the culprit.

It’s the plot of David Handler’s The Man Who Would Be F. Scott Fitzgerald, winner of the 1991 Edgar Award for Best Paperback Original. And the award was well-deserved; this book is an unquestionable winner. The third book in the Hoagy & Lulu mystery series, brought into e-book format by MysteriousPress.com, the book’s plot is deftly executed. All the clues are in place and the author seems to be an old master at what John Dickson Carr termed “The Grandest Game in the World”. The story makes for a fascinating, breathtaking read, and the pacing is excellent. The kaka hits the proverbial fan on many occasions and knocks you off the trail you’ve been so assiduously following. As for the ending, although I formed a few instinctive guesses, the solution ultimately caught me off guard, which is a testimony either to my stupidity or the author’s ingenuity—and I’m sure we’d both prefer to think it is the latter… 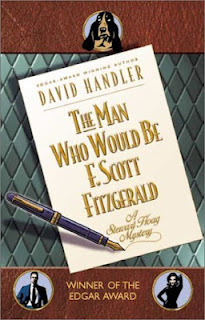 But even the best plot could fall flat without good characters, and Handler delivers on that front, too, especially with his main characters. Although a lot of bad stuff has hit Hoagy, he manages to keep his chin up instead of whining to the reader about how tough his life is. Hoagy is truly one of the most appealing detectives I’ve ever come across, and I’m choosing my words carefully. No matter what life throws in his direction (and life deals him a few heavy blows in this book), Hoagy shows a sense of humour and a generally-positive outlook towards life. That doesn’t mean he’s naïve, though— he is an intelligent fellow and it’s hard to slip anything past him. As for Hoagy’s dog, Lulu, she is a character of her own. She never speaks and she doesn’t solve the case or anything of the sort, but she feels like a very real character. The way she interacts with her owner, her allergies, the way she barks—all of it simply leaps off the page.

The other characters are all triumphant as well. There’s a nasty literary critic who profits quite a bit from his little side-enterprises, but who still knows talent when he sees it. There’s Cameron Noyes himself, who’s become such a public figure that Hoagy must strip away layer after layer of public posing to get to the core of the man himself. There’s Cameron’s girlfriend, the visionary artist Charlie Chu, who is a genius in her own field. And Cameron’s best friend Boyd Samuels, who has been running scams ever since he’s been old enough to talk… Oh, I could go on for quite a while… 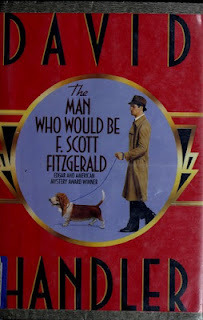 But just as fascinating is the glimpse we get into the world of publishing as it was in the late 80s/early 90s—and as Handler portrays it, it can be quite a cutthroat environment! (I can’t confirm whether it was like that back then— I was born in 1993, but like many children I was quite young at the time.) The descriptions we get of Cameron Noyes’ fictional novel, Bang, all seem fascinating (although we wisely never read an excerpt from the novel). There was even a movie adaptation, and the wit with which the changes made to the story are described are still right-on-the-money, even if nowadays Taylor Lautner would star in the movie instead of Charlie Sheen.

So, in conclusion, as you can probably guess, I would highly recommend The Man Who Would Be F. Scott Fitzgerald. It’s an excellent mystery populated by interesting, likeable characters. The plot is a success and excellently paced. The author shows his wit by the bucketful, as I found myself laughing out loud at several moments. And the book has aged remarkably well. This is one of the best books I’ve read so far this year, and it makes me very excited (and intrigued!) to read more by this same author!

Links: For those of you who are interested in this book (and I highly recommend it), here is the link to a Kindle edition—currently just $7.99, though I’m not sure how long that will last. (As usual, MysteriousPress.com has done an excellent job with formatting and proofreading.) If you don’t own a Kindle but are still interested, head on over here to see what other e-formats are available. You can also take a look here to see the entire Hoagy & Lulu series, which MysteriousPress.com has brought back into e-book form. David Handler’s website can be found here. Also take a look at this excellent video from MysteriousPress.com which forms an author’s profile of Handler: