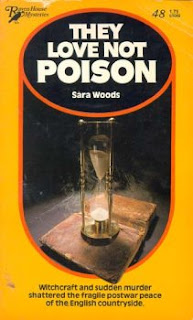 I was bewitched—nay, downright seduced—by the blurb on the back of Sara Woods’ They Love Not Poison. I was promised a book that would serve as a sort of unofficial sequel to John Dickson Carr’s The Burning Court: a mysterious death via poison takes place and the culprit seems to be the reincarnation of a 300-year old witch! With such an awesome idea, how can you possibly go wrong?

Unfortunately, and it breaks my heart to say this, Sara Woods finds a way to mess it up. I was hoping that today I would be able to sing the praises of an obscure minor classic. Instead, I find myself shaking my head in disbelief. The book’s story seems like it couldn’t possibly fail: set in post-WWII England, it involves Woods’ series character Antony Maitland. While staying at a friend’s place in a small farming community, Maitland gets involved in serious matters when a neighbour’s wife dies. Although she’s been ill for a while, the doctor finds the death suspicious and refuses to sign a death certificate. The rumours say that a young girl in the household is the reincarnation of a 300-year old witch, and somehow is the person responsible for the murder. And into all this we get some stuff about a lost treasure…

All jolly ingredients for a fun story, aren’t they? But Sara Woods just can’t handle them. She makes terrible decisions in plot construction. Some are apparently quite small— for instance, it’s never explained why the doctor found the death suspicious in the first place. But more important than the minor plot nitpicks: the pacing is absolutely terrible. Strands of plot are forgotten for large chunks of the book, only to be summoned again at random when the author remembers: “Oh yeah, there’s supposed to be a witch in here!”

Is there any atmosphere of the supernatural? No, never, and if there were any attempts to do so they failed miserably. There is no sense of dread or uncertainty. It’s a lifeless book with faceless characters talking either about how awful it is that someone should die or wasting our time talking about some fictional local history.

But for me, the absolute cruncher came at the ending, and I’m afraid I will have to spoil it to make my point clear. Right out of nowhere, a group of thugs/gangsters is introduced into the story at the (ridiculous) climax. They’re looking for the lost treasure you see, and although they are a potentially murderous bunch, Antony Maitland believes they didn’t kill the book’s second victim. How comfortably decent of them… but it ruins any effect of menace Woods tried to instill! Not only that, even though they are innocent their existence turns out to be vital for the real culprit, and again, these revelations all seem to be wild, unsubstantiated guesses. And to make matters worse, the ending scene is one of those moronic ones where somebody is tricked into giving the murderer away: "Oh, but I never said that the victim was garrotted...".

But what could I care by this point? I was bored, bored, bored… and I hated it! I had such high hopes and they were mercilessly dashed. The writing is sloppy, the characters are bland, there’s no atmosphere to speak of, no cleverness in plot construction, the whole thing ends on a cop-out, the pacing is terrible, and the book’s most interesting ideas lie forgotten for most of the book! They Love Not Poison is a terrible miscalculation, one of the biggest missed opportunities I’ve come across this year. I hate to do this, especially so soon after the clunker Nevermore, but this is another one headed straight for the Hall of Shame.

Anyone interested in the general plot idea should find John Dickson Carr’s The Burning Court and read (or re-read) it instead of this one.