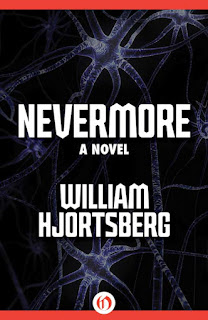 Imagine Sir Arthur Conan Doyle meeting Harry Houdini in 1920s New York City, and a bizarre string of murders takes place. A madman is murdering people by using the works of Edgar Allan Poe as inspiration. Every grotesque murder seems more inexplicable than the last. Is there some sort of pattern? To top it all off, Houdini and Conan Doyle are in the middle of their famous spat over spiritualism and whether ghosts can be real. How awkward, then, that the ghost of Edgar Allan Poe keeps showing himself to Conan Doyle!!!

This extremely-awesome idea is the one behind Nevermore, a novel by William Hjortsberg. I’ve searched for this book for a long time, but with no success, before finding an edition for the Kindle. Unfortunately, after all the hype, the book turned out to be a major letdown.


The best thing about this book is probably the Conan Doyle/Houdini dynamic, and Hjortsberg comes up with some really good reasons for why Conan Doyle may have been convinced that Houdini was endowed with supernatural powers. In one of the book’s most memorable scenes, Houdini pulls off a stunning magic trick in which Conan Doyle writes something down on a piece of paper away from the Houdini household. When he returns, Houdini manages to reproduce the words without once touching the slate on which they are written! 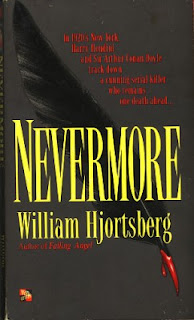 Unfortunately, the book starts coming apart at the seams about halfway through. Here is the problem: the author is obsessed with sex. No, really; we get constant references to genitalia (especially Houdini’s) and there are two sex scenes that are the most graphic I’ve ever encountered thus far in my literary wanderings. In fact, they are downright pornographic and just embarrassing to read. And what else? These scenes have absolutely nothing to do with the plot! (To be fair, there’s a laughably pathetic attempt to make the first scene relevant, but this is a subplot that only pops up once in a while to remind you it exists.) These scenes both come right the fudge out of nowhere and finally made me skip over them. I didn’t miss much.

Let me repeat that just so you understand the gravity of the situation: in a book in which a serial killer uses the work of Edgar Allan Poe as inspiration, with Arthur Conan Doyle, Harry Houdini, and the ghost of Poe teaming up to find the killer… the author… thinks Houdini’s genitalia and an illicit affair of his (completely inconsistent with the character as the author writes him!) need to be talked about in detail!!!

Another of the book’s pointless subplots involve a cop who pops up every once in a while, exclaims “shit” or something of the sort to show how tough he is, and disappears, not to be seen again for the next 50 pages. In fact, a lot of what happens in this book and particularly the scenes involving this character have no relevance whatsoever to the plot.

See, in a thriller or mystery, the plot construction is key, and here it is laughably bad. The ending is ridiculously stupid and inconsistent with the facts (flat-out contradicting itself in the dénouement), and the very final scene makes no bloody sense whatsoever, even if you go back and read your Edgar Allan Poe to try and make sense of it. And Houdini’s final magic trick is again pretty much impossible, unless you believe he sold his soul to the Devil. The unflattering portrayal of Houdini throughout the book suggests that the author thinks so. Houdini’s other magic tricks? Never explained. So it might as well be Satan. Way to let us down. 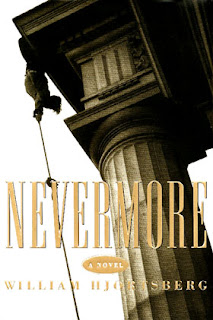 I really don’t understand how you can get such a cool idea so wrong. Even the ghost of Edgar Allan Poe does nothing for the story. While the scenes with the ghost are a delight to read, the ghost quite simply does nothing. He shows up and gives a ghostly wail, and then he leaves. He also becomes the deus ex machina of the climax, a frankly ridiculous move.

And that’s the real shame of it: it is such a great idea, and in the right hands, so much can be done with it! But Nevermore is bogged down by shoddy plot construction full of irrelevant characters and subplots, as well as an obsession it develops midway through with Houdini’s sex life, leading to downright pornographic scenes. At the end of the day, I just can’t recommend this book to anyone. It has left an extremely bitter after-taste and I doubt I’ll be able to rid myself of it anytime soon. This is one for the Hall of Shame, folks, and it has reminded my why I developed such disdain for post-GAD mysteries in the first place before authors like Bill Pronzini and William DeAndrea changed that.