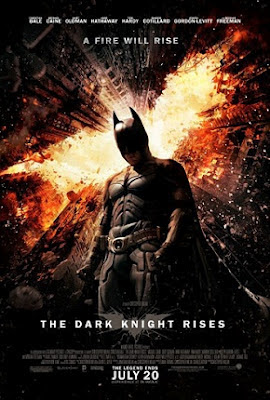 The Dark Knight Rises clocks in at an epic 2 hours and 45 minutes, but the movie doesn’t feel like it’s taking that long. There’s a lot of story to cram in, and although the first half hour or so is mainly build-up, when the action kicks in it does so with a vengeance, and everything builds up to the most spectacular conclusion I’ve ever seen in cinemas… and I’m choosing my words carefully.


Plot details on this movie are thin, but you probably all know the obvious points: the terrorist Bane has taken over Gotham City and Batman, who has been missing, must return to defend his beloved city. (It’s kind of tough seeing how Bruce Wayne has spent the last eight years as a recluse, and is a partially disabled man.) Anne Hathaway is Selina Kyle/Catwoman. Marion Cotillard plays a new character named Miranda Tate, and Joseph Gordon-Levitt plays another new character, police officer John Blake. Michael Caine, Gary Oldman, Morgan Freeman, and Christian Bale all return to their familiar roles. And also returning to the director’s chair is Christopher Nolan. 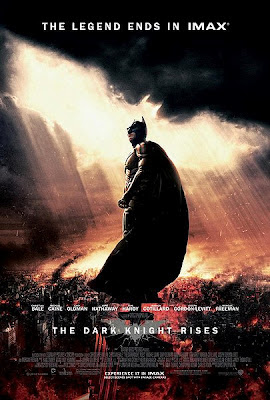 If you are looking for me to spoil the movie, you might as well turn away now. I won’t tell you if Robin appears, nor will I tell you why Liam Neeson returns in a cameo. I won’t tell you what Bane’s plan is for his takeover of Gotham City. I won’t even tell you if Bane breaks the Batman’s back as he does in the comic book Knightfall (which I vaguely remember reading years ago). This review is going to be as spoiler-free as I can make it. If you want to find out all these answers, go see the movie. Honestly, if you’re going to look up the Wikipedia page to read the plot summary, you’re only spoiling a good story for yourself.

And man alive, the plot is delicious! All those mysteries I’ve been going mad over are explained without any of that maddening sequel-bait! Yes, there’s a really good reason for Liam Neeson’s cameo! (There’s another, far less publicised cameo that is even more delicious than that!) But far more important than that for the purposes of this blog: there are some excellent elements of detection in this film! Bane’s plan for the city is an excellent one, and we follow around one of the characters as he pieces this plan together… but is the realization going to be too late? There’s also several twists at the end, and although none of them employ the traditional use of clues (I can’t imagine Dr. Fell going over this crime scene), the viewer is not cheated either. All these revelations make for really satisfying ending. How satisfying? Well, the crowd at the theatre gave the film a standing ovation when it ended. I joined in, something I don’t often do. 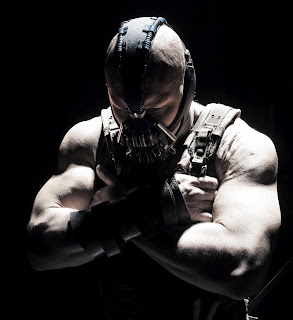 I could tell you all what I thought of the cast, but we all know the villain matters most. The villain can make or break a superhero movie. So how was Bane? I don’t know how Tom Hardy pulled it off, but his Bane is even more terrifying than Heath Ledger’s Joker. He’s definitely more nihilistic and brutal, murdering several people with his bare hands. I know people have complained about his voice, but I personally found it fantastic. Tom Hardy infuses Bane with a sardonic (and at times somewhat sadistic) sense of humour. When a boy sings the national anthem at a football game, prior to Bane’s takeover of the city, the villain remarks that the boy has a lovely voice. In the stunning opening sequence, when asked what his plan is, Bane, his voice dripping with irony, remarks that it’s obvious: he’s going to crash the plane and ensure there are no survivors. Of course, the slight British accent only helps to add to this effect. (I suspect that is why many are irritated: not only is the voice slightly mechanized, you have to interpret a British accent through it as well. I had no trouble at all with this.)

The rest of the cast was fantastic as well. What else did you expect with such big stars and such talent writing the screenplay? Of the new cast members, Anne Hathaway is particularly worth noticing. She plays Selina Kyle, a. k. a. Catwoman. Although the name “Catwoman” is never used in the movie, she is still Catwoman, and cats are often referred to when people confront her character. Selina Kyle is one of those gorgeous femme fatales, and Anne Hathaway pulls off this aspect beautifully, as well as kicking some serious ass in the action scenes. 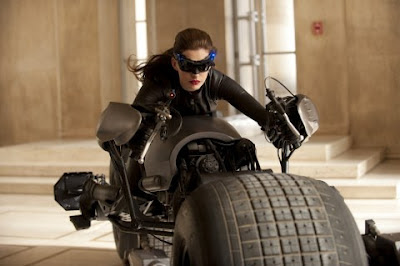 But something else to take into account is the director, Christopher Nolan. He is a genius. I do not say this because it is cool to say this; I say this because it is the truth. I discovered this years ago when my love for Robin Williams’ serious movie roles led me to discover Insomnia, an underrated but excellent Chris Nolan movie. I fell in love with Nolan’s style, and his style really shines through in The Dark Knight Rises. You can just tell when a movie becomes a CGI-fest, but Nolan prefers to use extras and stage the stunts and fights. It makes everything seem so much more realistic. But he also uses flashbacks and monologues to maximum effect, and he manages to misdirect his audience beautifully at times. I could hear a collective gasp from the audience at one point in the movie, where a major plot revelation occurs. And when I realized just how neatly Nolan tricked me into assuming something untrue, I felt like applauding.

Is this movie worth seeing in IMAX? Yes!!! This movie was shot largely in IMAX, and you can really tell. It looks positively stunning, especially during the big action sequences. The picture is really clear and sharp and so much detail can be crammed into one shot. It looks absolutely beautiful, and I can’t imagine any other format doing the film any justice. This is a visually fantastic film and it’s worth the extra $5 to see it as it was intended, in IMAX. And as cliché as it sounds, that isn’t a publicity gimmick.

Finally, there’s the music by Hans Zimmer. I had the pleasure of purchasing the entire soundtrack and listening to it on my brand new MP3 player. By itself the music was pretty good… but when it accompanies Christopher Nolan’s visuals, a layer of sheer epicness is added. That recurring chant motif becomes positively haunting. When the final action scenes occur, several familiar themes reappear but a sense of dread and urgency is added into them, echoing just how high the stakes have become in this film. You can appreciate the music even more once you have seen the movie.

So that’s my review of The Dark Knight Rises. I encourage everyone who enjoyed the first two movies to see this movie. (A word of warning: if you have not seen the first two movies you could quite easily get lost in some sequences since the movie assumes you’re familiar with the first two movies.) If you’re already looking forward to this movie there’s almost no way you can be disappointed. The only drawback is the movie’s length—3 hours is a considerable amount of time to devote to watching a movie. But honestly, I wouldn’t cut one second out of this movie. I enjoyed all the build-up, the false starts, and the way Chris Nolan created suspense so naturally. I loved the actors’ performances. I loved Bane. I loved how an entire world was being created in front of my eyes, only for Bane to wreak havoc. I loved Hans Zimmer’s music. And I loved the story. The conclusion is one of the most epic, spectacular endings I have ever seen.

All in all, The Dark Knight Rises is one of the most memorable movie experiences I have ever had. No words of mine can do justice to this movie. If you’re a Batman fan—and I think we’ve already established that I am—this movie is one for you. And if you’re assuming that this review marks the end of Batman on this blog… you are very mistaken!

Notes: Since I was at the midnight IMAX screening, I got a free poster for the film which portrays Bane staring out ominously, with the Bat symbol cleverly incorporated. Also worth noting: the movie starts with a special preview of the upcoming James Bond movie Skyfall, in which we finally find out some plot. Apparently it involves a missing hard drive that contains the identities of all the British spies embedded in terrorist organizations… and I’ll say no more. It’s gotten me very excited for the upcoming Bond movie! There’s also a really quick teaser of Man of Steel, an upcoming Superman movie directed by Zack Snyder and produced by Christopher Nolan. Not being a big Snyder fan (as my recent Watchmen review established), I might very well avoid that movie unless something more interesting catches my eye.