I am Chief Superintendent Lookout; Lookout of the Yard... 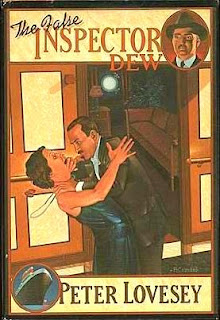 H. H. Crippen was one of the 20th century’s most infamous murderers—or, at the very least, accused murderers. Over time, much doubt has been cast upon the “guilty” verdict, and some controversial new DNA evidence suggests that the remains found in Crippen’s basement may not have been his wife’s after all. (This evidence cannot be completely trusted, however.) Whatever the truth of the matter, Crippen and his lover, Ethel le Neve, fled to Canada, but thanks to the miracle of wireless communication, were arrested upon arrival by Inspector Walter Dew, who simply took a faster ship to get there first.

It is this infamous real-life murder case that inspires The False Inspector Dew by Peter Lovesey. In it, a dentist named Walter Baranov decides to murder his shrew of a wife Lydia on board the ocean liner Mauretania. The plan is a perfect one— he will be free to live with his lover Alma, a girl absolutely devoted to him. And in a touch of irony, to get away with the scheme he registers under a false name as Walter Dew, after the famous inspector who caught Crippen. There’s no way the scheme could possibly fail. But, irony of ironies, when a body is found bobbing in the ocean, the captain of the ship quite innocently asks the eminent Inspector Dew to investigate! 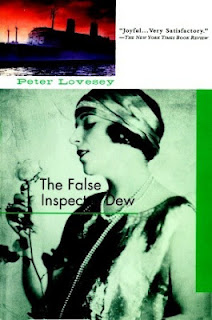 An awkward situation, investigating a murder of your own— especially when you haven’t the slightest idea how to act like a detective! So Inspector Dew goes around talking to his fellow passengers and discovers that he may not have been the only one up to no good during the night…

The False Inspector Dew combines a little bit of everything—inverted mystery, comedy, and through an ingenious plot development there’s a genuine mystery to be solved as well. It’s a delightful and downright delicious book to read. The plot twists and turns throughout, making it a definite page-turner. It’s ingenious as well—Lovesey gives his readers every clue, and when you reach the ending you realise just how neatly the author has treaded the line between cheating and fair play, while always remaining firmly on the “fair play” side.

The characters are also on the good side. The titular “False Inspector Dew” is a wonderful character; he’s a boring lover and a bad detective who is desperately trying to pass himself off as an ex-inspector. His lover Alma is a bit on the psychotic side, but in a very funny way—she is the one who starts the whole romance, finding Walter’s smallest, most ordinary gestures filled with romantic symbolism. She is a big reader of romantic novels and has unrealistic expectations, and that makes for plenty of fun. Even the doomed wife Lydia can be plenty of fun with her pig-headedness over the most unreasonable requests. And then there are all the passengers aboard the boat… 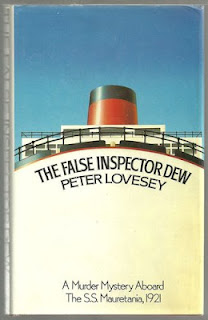 The writing is excellent and can be very funny indeed, especially in those moments where Inspector Dew’s mask drops and he says something he really shouldn’t have. It can also be quite suspenseful, such as a great scene during a storm, or another scene where a killer is apparently caught-red-handed. It’s part of the package that makes The False Inspector Dew such a treat— and the ending is just plain perfect. It’s a really nice way to wrap everything up for good.

Overall, I highly recommend The False Inspector Dew. It won the CWA Gold Dagger Award, and in my opinion it was a very deserved prize. The story is an ingenious one, with terrific plot twists throughout to easily hold your interest. The ending is top-notch, and the reader is given every clue to solve the mystery that crops up. The comedy is terrific. The characters are loads of fun. And when you look at it in retrospect, there are some passages where I can only admire the author for creating a grand puzzle-plot in the fine old tradition. In short, the book is an absolute triumph. I’m afraid I’ll have to disagree with the PuzzleDoctor here and highly, highly recommend it.