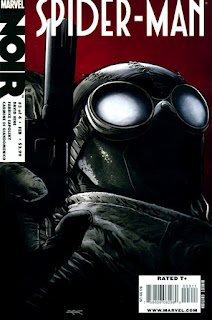 Marvel Noir was a concept from 2009-2010, in which Marvel released a bunch of miniseries inspired by their popular comic books. But here’s the twist: these comic books are set in an alternate reality inspired by film noir! (As a big fan of film noir, this really piqued my interest.) This sounds like a great idea, turning superheroes into private eyes and going for a more realistic tone than the Marvel Universe. And so today I’d like to take a look at the mini-series Spider-Man Noir, which lasted four issues and was followed with a second Spider-Man mini-series, Eyes Without a Face.

In Spider-Man Noir, we find ourselves in 1933, during the Great Depression. We open on a helluva situation: J. Jonah Jameson has been shot in his office at the Daily Bugle, and when police break down the door, they find the masked vigilante known as “the Spider-Man” inside. They immediately assume that the masked man has murdered the newspaperman and open fire, despite Spider-Man’s protests that “this isn’t what it looks like”.


And suddenly we flash back in time courtesy of our narrator, Ben Ulrich, a reporter for the Daily Bugle. While taking pictures for his upcoming articles, Ben comes across May Parker, an old woman with an indomitable spirit who stands atop her soapbox and gives speeches to a crowd with a rather socialist flavour. When a bunch of goons try to attack her, Ben diffuses the argument. This situation leads to a friendship between Ben and May’s nephew, Peter Parker. 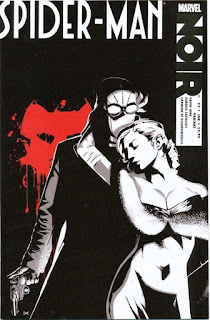 The two get to bond as Ben trains Peter in the art of photography, and Peter learns a lot about the corruption in his beloved city of New York. It turns out that Norman Osborn, known as “The Goblin”, basically runs the entire town, with the mayor in his pay. Only a few people, like the outspoken J. Jonah Jameson and Aunt May, denounce him in public. Peter’s late Uncle Ben also spoke against The Goblin, but then he was viciously attacked one night and his carcass was torn to shreds by a dog…

The plot really gets in motion near the end of issue #2, and I really admire a lot about this story. The cleverest things about it is how it adapts the Spider-Man origin story. We all know it by heart by now: how Uncle Ben was shot and Peter could have saved him. Well, this mini-series gives it a unique twist, and not just by changing time periods on you. It knows it wants to do something different, and by gum it does. And the nods to the classic Spider-Man origin story are absolutely delicious.

The best part about this comic book is how it handles the villains. The Green Goblin becomes the ruthless businessman The Goblin, with the police and mayor in his pocket. The Enforcers also appear as the Goblin’s muscle in the city— they are your classic thugs-for-hire, working for the highest bidder. And the Goblin is accompanied by several baddies straight out of the carnival freak-shows. There’s Kraven, who used to be an animal trainer—a nod to Kraven the Hunter. And then there’s Adrian Toomes, “The Vulture”, who snapped during his years as a carnival sideshow and has lost all his humanity, becoming a monster with a taste for human flesh. It’s all given a tinge of realism, but due to the fantastic nature of the source material, it isn’t quite what Raymond Chandler had in mind. 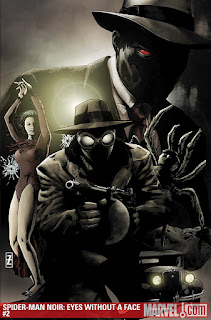 Unfortunately, the comic book botches the entire reason for its existence. Here is the problem: Peter Parker… gets bitten by a magical spider and it gives him superpowers. Call me crazy, but that really does not fit into a noir-themed universe! It’s such a bizarre moment and never fully explained, and it left me very dissatisfied. The people behind this comic were so close! Could they not have given Spider-Man a gun that shoots a net instead of a bullet? (A net’s sort of like a web, isn’t it?) And maybe he got into a fight with a thug known as “the Spider”, which is when he realized his own hidden strength and decided to use it to fight the Goblin? I know it’s not the greatest solution ever, but it is so much more consistent with the idea of rewriting Spider-Man as a noir story! And it took me all of thirty seconds to think of this alternative. Another major problem, in a similar vein, is the reason Norman Osborn is called “The Goblin”. You really can’t get much more unimaginative than that.

It is such a shame, too, because everything else is done so nicely! The plot is exciting and convoluted, even if it isn’t a traditional fair-play mystery. The comic books are integrated so nicely into a noir universe! Felicia Hardy, for instance, is now a glamorous dame who runs a speakeasy called The Black Cat! When the series gets something right, it really smacks it out of the park. Unfortunately, it gets key points wrong, and the entire comic book suffers because of it. 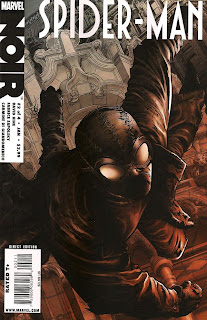 Spider-Man Noir has a great idea at its core: rewrite a superhero’s origin story in an alternate universe as a story that could have been taken right out of film noir. And much of it succeeds. It delightfully transforms some of Spider-Man’s sillier villains into fairly realistic and rather frightening figures. It tells a complex story of murder, corruption, greed, and other vices. It opens on a helluva note and is really a delight to read. But its problems are major: the biggest example is when the writers refuse to take a major risk and give Peter Parker superpowers in a bizarre, out-of-place scene. It is like throwing the Ark of the Covenant into Sin City—it just doesn’t work. There are other touches of sloppiness and laziness which bring down the comic’s overall enjoyability.

As a fan of film noir, I enjoyed this comic book. I also enjoyed it as a long-time fan of Spider-Man. But my recommendation of this comic book comes with a serious caveat. The art and story and characters are generally quite good… but the occasional sloppiness and laziness really does hurt an otherwise terrific comic book.