Gangsters and Gunsels and Gals (Oh My!)

Written by Patrick
When the legend becomes fact, print the legend.
—Maxwell Scott, The Man Who Shot Liberty Valance (1962) 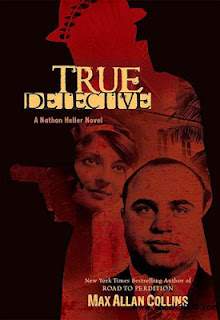 Max Allan Collins is something of a recurring figure on this blog. I’ve quoted an interesting article he wrote on “The Hard-Boiled Detective” in Encyclopedia Mysteriosa. I’ve read two of his Batman short stories. But I hadn’t yet read any of his novels. I finally took the first step in that direction a while ago, where ten of Collins’ Nate Heller books formed the Kindle Daily Deal – each priced at $1.99. I bought all ten of them. But then I figured to myself, why start in the middle of a series I know nothing about? Why not start where the series started? And so I bought True Detective, the first novel in the Nate Heller series.

The Kindle edition begins with a terrific introduction from the author. He talks about how he came up with the concept for this series and how this book came to be. He tells readers how he named his son, how his literary idol Mickey Spillane complimented him on this book, and how (due to its length and content) it was a challenging book to sell. He also expresses a genuine hope that readers will enjoy the book. I know for a fact that there’s at least one insane reader in Canada who loved every page of it.

Our story opens in December 1932, and our hero is Nate Heller. He’s a Chicago cop, and as Chicago cops go, he’s an honest one. “Which means anywhere else, I’d be in for twenty years,” Heller says at one point. It’s true: he takes the occasional bribe, and rumour has it he sleeps around. One day, while Heller is off-duty, he’s picked up by Harry Lang and Harry Miller, two brutish cops who act like Mayor Anton Cermak’s unofficial Brute Squad. They take him along for a police raid on an operation run by Frank Nitti, Al Capone’s successor. Only it turns out to be an assassination attempt, as Lang shoots Nitti in the back. Things get a bit out of hand, and in the ensuing melee, Heller guns down one of the gangsters. 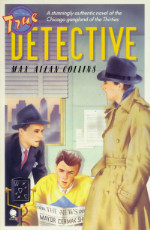 The dead man was a nobody, an orphan from the old country. But the death bothers Heller. He was brought into the raid unawares, and he resents it. He helped cover something up in the past, and so now cops like Lang and Miller think he’ll help them clean up any dirty work. Heller isn’t perfect, but he has some standards. He’s the best of a rotten bunch, if you will. So the long and short of it is, he quits the force and decides to go into business for himself as a private eye. And thus begins the complex plot web that forms True Detective.

This is a stunning novel. I was absolutely floored by it. I enjoyed every single page. The true genius of True Detective is that Nate Heller is not just running around with famous historical figures like Elliot Ness: he’s also investigating real-life crimes. The beauty of it all is, fact and fiction are blended together so neatly that I couldn’t tell where fact ended and where fiction began. And even when I knew what was going to happen, such as in the scene in Miami, I found myself on the edge of my seat, wondering how it would all end.

The plot is well-done. It’s a complex plot web with a satisfying resolution. Heller investigates multiple cases throughout the book, and at the end you feel they’ve all come to a close. The story is exciting, full of action and suspense. I really liked the ending, though I don’t want to specify why. Oh, and there’s plenty of sex. It’s used wisely, to develop Heller’s character, and it isn’t as explicit as it could have been. 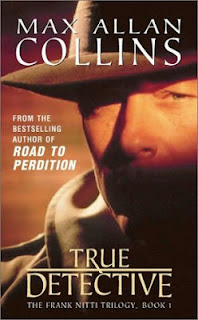 In fact, let me linger on this sex issue for a bit. One of the most famous scenes in Raymond Chandler's The Big Sleep occurs when Carmen Sternwood shows up at Marlowe’s house, naked, giggling, and perfectly willing. (I personally hate this scene, but it's been influential.) Despite having made out with her and every other woman in the book, Marlowe refuses to sleep with her and boots her out, in a scene that is of course highly symbolic, but which I suspect contained elements of wish-fulfillment. Heller is not quite as stoic as Marlowe, and faced with the same situation, he probably would have succumbed to temptation and deflowered the girl. He’s no knight in shining armour – his armour is tarnished, but compared to the other people in this novel, it’s positively pristine. Heller isn’t perfect and he knows it, but he tries, and that’s what makes him a hero in my eyes.

I never thought I’d say this— but I’m grateful that I read Mickey Spillane’s I, The Jury before I read this book. I can see the Mike Hammer influence pretty clearly, although I still dislike Hammer intensely. But it’s interesting how Heller is similar in some ways to Hammer, and similar in some ways to Marlowe. Okay, at this point we can run down the whole list and draw comparisons to Lew Archer, Batman, and the Continetal Op, then muse about the Freudian juxtaposition of these characteristics in a pre-Nietzschean society that ultimately transcend the genre—though not in a Miltonian sense. Whatever that means. The point I’m trying to make is that Nate Heller has some of the characteristics that I absolutely despise in Mike Hammer, and some of the characteristics that I admire in Phillip Marlowe. And instead of clashing, these blend together so neatly, and make for a fascinatingly complex character!

This is one of the things that justify this book’s length—the print edition runs to 480 pages. But don’t run away! I know: far too many books nowadays are bloated beyond all belief, but this book never feels padded. Nate Heller is a fascinating character and I was genuinely interested in his moral dilemmas, his love life, and his family history. This includes his father’s suicide, a tragic moment, especially when we find out why he did it that way. It’s every bit as fascinating as the story, which is fairly complex but which, on its own, mightn’t even fit 300 pages. 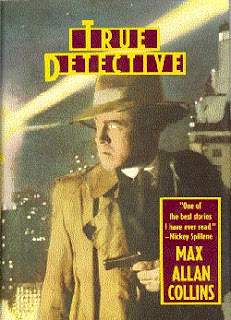 Heller’s narrative voice is also great, and he manages to sound tough without swearing constantly. I’m annoyed by characters whose mother tongue seems to be Profanity, but Heller isn’t like that. He says “f*ck” on more than one occasion in the novel, and it isn’t censored. But these work—they’re at highly-charged emotional moments where “Darn it!” just wouldn’t cut it. And back in the 1930s, such an expletive had quite a bit of shock value, a detail that Collins doesn’t forget.

Overall, Max Allan Collins’ True Detective is a stunning achievement. I’m positively floored by it. The plot is terrific, and the main character of Nate Heller is fascinating. He’s tough, he’s sensitive. He takes bribes. He sleeps around. He isn’t perfect, but he’s the best we’ve got. Collins’ style is excellent and keeps you invested in the book easily, despite its length. The book’s conclusion is brilliant in its own way. And somehow, Collins manages all this with real historical figures and real historical crimes.

Someone buy Max Allan Collins a drink – I’ve got a glass of Perrier here that I now raise in a toast to the author and to this book. This is a brilliant debut, and I can hardly wait to read more. And thanks to that Kindle Daily Deal, that probably isn’t far off in the future…

Note: I read this book partly on the Kindle and partly via Audible, testing out Amazon’s new Whispersync. (The results are in: it works decently, but it drains the batteries of my phone too quickly.) The audiobook recording is brilliant – Dan John Miller does an excellent job capturing Nate Heller’s voice. I’d love to hear him read a Raymond Chandler novel.