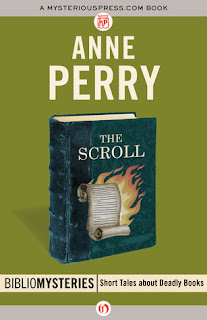 MysteriousPress.com is introducing a new series of stories called Bibliomysteries. The concept of the series is relatively simple: these are all relatively short tales centered on some sort of deadly book, manuscript, etc. Four titles will be released on November 12th by some prominent authors: Anne Perry, C. J. Box, Jeffrey Deaver, and Ken Bruen all contribute a tale.

In Anne Perry’s The Scroll, the book that sets the entire plot in motion is the titular scroll. It all starts with Monty Danforth. He’s an employee at a used bookstore, and the owner just bought a large crate of books from an estate auction. At the bottom of the crate lies an ancient scroll, not included among the catalogue of items. Intrigued, Monty takes a closer look: it looks like an old scroll, and the language is unfamiliar. Monty decides to photocopy the scroll in order to get a translation done, but the photocopier refuses to do its job—although it scans other documents just fine. So he tries to take a picture… and the scroll shows up clearly on the picture, but the text has vanished.

But before you can say “boo!” in walks an elderly man with an eight-year-old girl. He introduces himself as Judson Garrett, and offers to buy the scroll. Monty isn’t sure what to say. He finally tells Garret that he cannot sell the scroll because there’s a lot of work to be done with the other books, and besides, his boss needs to set the price. Garrett understands, but he delivers an ominous warning: “Many people know it is here … They will come and offer you many things for it… money, but other things as well. Be very careful what you do with it, Mr. Danforth…”

And of course, Monty gets more strange visitors, each more eager than the last to purchase the mysterious scroll. Things get really bad when a murder is committed, and Monty starts to experience disturbingly apocalyptic visions. All this builds up to an exciting climax. It’s all really well-done and quite atmospheric.

But as you can perhaps guess, this story focuses more on its strange/supernatural elements instead of being an “actual” mystery. Viewed from that perspective, it might even be a disappointment, since the ending is a bit open and ambiguous and we don’t get a clear answer to all the mysterious events that have been going on. However, the rest of the story is quite well-written, and I was willing to forgive this shortcoming.

Anne Perry is a most talented author. The entire tale is brief, to the point, and has suitable amounts of mystery counterbalanced with some nice atmosphere. There’s a vague sense of evil, a threat that doesn’t quite make itself known to us, and which makes the atmosphere all the more interesting. It won’t give me nightmares in the middle of the night, but it made me concerned as to what would happen next. One of the signs an author is doing something right is when a reader is eagerly turning the pages, trying to figure out where all this is headed.

All things considered, I recommend The Scroll. The entire story can easily be read in one sitting, in under an hour. (According to my Kindle Paperwhite, the estimated time for reading the whole book is about 45 minutes.) It makes for a quick, pleasant read: intriguing, suspenseful, and atmospheric. It’s a neat idea and a nice way for The Mysterious Press to kick off its bibliomysteries. I look forward to more!