What a Tangled Web we Weave!

Written by Patrick
I haven’t really tackled Polish mystery novels all that often on this blog. I wrote something about them as a guest post for Beneath the Stains of Time— which was still known as Detection by Moonlight at the time. And last year I read a book by “Joe Alex”, a Polish author named Maciej Słomczyński who was the only person to have translated all of Shakespeare’s works. I hope that this year I’ll be able to cross the language barrier a bit more often and give readers a small taste of the stuff that is currently being written in Polish… and hey, we might even get a novel that slips through the cracks and gets translated into English. 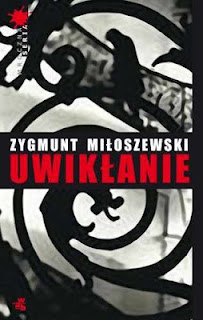 What are the odds of that happening, you might ask? Well, the odds are better than you might imagine, because I’ve found one. Zygmunt Miłoszewski is an award-winning Polish author, author of one of the few Polish crime novels to cross the language barrier into English. The novel is Uwikłanie, translated as Entanglement and published by the Bitter Lemon Press in 2010.

The setting is modern-day Poland and our hero is Teodor Szacki, a public prosecutor in the nation’s capital, Warsaw. He’s about 35 or thereabouts, and he’s married and has a daughter. He’s also got a tough job, one that can get depressing as hell. Take this latest case, for instance. A body was found in a Catholic convent, rented as a retreat centre. At the time, it was being used by a psychotherapist for a weekend of group therapy sessions, where each session revolved around a different person. The point of each session was for the participants to role-play as important people in X’s life, and X would have to come to terms with [insert your favourite psychological issue here]. One pseudo-scientific explanation later, we find out that a child’s heart disease can be caused by his father’s failure to attend his parents’ funeral. Sounds like a fun time!


That is, until someone decides to take the role play too far… and instead of helping X to get over his personal issues, someone turned to murder instead. After all, death is a permanent form of therapy. And as a result, Henryk Talek was found lying on the ground, stabbed through the eye with a skewer.

Before long, Szacki finds himself battling his superiors to investigate the case. Then, a link to the past turns up, but it’s a link that points straight to the activities of the Służba Bezpieczeństwa (SB), the “security organ” of Poland under its Communist regime. That’s a nice way of saying that they were an organ of terror, murdering many innocent people, such as the Catholic priest Jerzy Popiełuszko, who was kidnapped, beaten up, murdered, and thrown into the Vistula (Wisła) river. These charming domestic terrorists have also long been suspected of other high-profile murders. 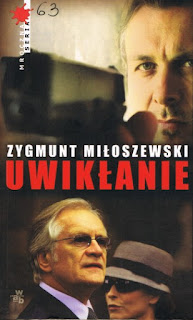 Perhaps you can tell, but a modern Polish setting has plenty of potential for a crime novel, especially of the noir variety. Poland has been free from Soviet rule since the 1990s, but the scars that were left behind are deep ones that have yet to heal. Anti-Russian sentiments are still quite high in Poland, and much of the population is convinced that the plane crash at Smoleńsk that killed president Lech Kaczyński was a Russian assassination dressed to look like an accident. Perhaps these sentiments are due to the fact that much of the population remembers the Soviet regime, where such a theory would easily be the truth. Andrzej Wajda captured the time period very memorably in his recent film Katyń, a film that would have gotten him murdered if he’d made it twenty years earlier. It gives an excellent insight into post-WWII Polish society and how the Soviet regime tore the country apart.

So Poland is a country full of tension, and Miłoszewski realizes this. When he introduces the SB, he does a fantastic job of portraying these murderous thugs and the influence they continue to have in Poland, even though they are officially long-gone. I’m reminded of Anthony Quinn’s Disappeared, a book that was published by The Mysterious Press last year, where old sins from the Troubles cast long shadows into modern-day Ireland. Substitute Poland for Ireland, and the Soviet regime for the Troubles, and you have a similar premise.

But luckily for us, this is also a fairly-clued mystery. This was the most delightful discovery of the book for me, especially when the solution seemed to turn on the author taking the method of psychotherapy that is described seriously. But no, there are legitimate clues pointing to the real killer after all, although the author comes really close to cheating the reader at one point early in the novel. It’s a line that it is best to avoid, and Miłoszewski’s flirtations with it are better left alone. 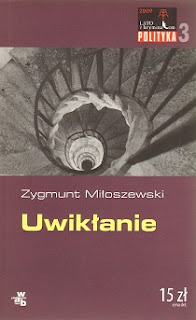 Szacki is a terrific main character. He’s going through a bit of a personal crisis and so he has a bit of an affair on the side during this novel. Well, sort of. It never becomes sexual—unless pleasuring oneself counts?—and Szacki is worried that it will escalate into a full-blown affair. But he has to deal with his wife and his daughter all the time, trying to conceal this from them. It becomes more and more difficult to do so.

I also liked the police procedural elements of this novel. Szacki’s investigations keep being interrupted by other cases— for instance, a murder where an abused wife finally snapped and lashed back at her husband with a knife… Or a murder where three drunk men passed out, but only two of them woke up: the third had a knife sticking out of his chest... Or the corpse discovered under the playground of the local school…

That being said, do I have any problems with this book? Yes, I have a few major issues. The first one is the social commentary. I’ve tried showing you why a crime novel set in Poland has so much potential for social commentary, but apart from the bits with the Russians, much of this potential is wasted. Miłoszewski seems to be under the impression that social commentary is literally where you stop the story to comment on society. Thus, at the start of every chapter, we get a news report for the day, as well as the weather, and the daily dosage of the Finger of Shame. By this, I mean that Miłoszewski gets on his soapbox and points a shameful finger at Poland in general, pointing out what kind of atrocity was committed towards the gay community today and how we all ought to be ashamed of ourselves for being such bad people. It frankly got tiring, especially since the gay community plays no role in the mystery. The killer isn’t gay. The victim isn’t gay. We never meet anybody who is even the slightest bit gay. I don’t want to sound like a bigoted, raging homophobe — I’m not — but these lectures were so unnecessary, and I wanted to get back to the story instead of listening to this rant ad infinitum. 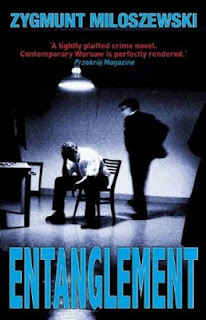 And there’s a major hole in the plot. The story is supposed to be a race against time, because Szacki has a deadline. If he doesn’t have the case solved by Monday, he has to go over to the narcotics squad and help with their newest operation. Monday comes, and Szacki talks his way out of it, getting an extension to Wednesday. Wednesday comes and goes, and it seems everyone forgot about the deadline ever existing—it’s never brought up again. I call BS on that—if you’re writing a police procedural, you can’t forget such a major conflict within the department!

Apart from that, Entanglement is a pretty good read. It’s a traditional detective story disguised in the rags of a noir-ish European thriller-police-procedural. The Polish setting is full of potential for such a story, but it is largely squandered due to an ineffective technique for lengthy social commentary that interrupts the plot. When these segments are finally over, though, the plot kicks in and it’s very much worth the ride. And when commenting on tensions between Poles and Russians, the social commentary is relevant to the story and it’s excellently done. So I recommend Entanglement, as long as the reader can plough through some rants that are irrelevant to the story and don’t do much for it.