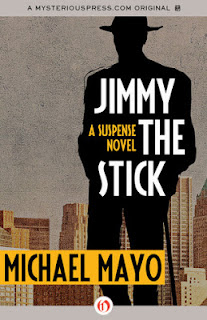 I was intrigued by the plot summary of Michael Mayo’s Jimmy the Stick, a novel published by The Mysterious Press last year. It tells the story of Jimmy Quinn, a bootlegger and gunman who used to be a runner for a bunch of mobsters. Then, Prohibition kicked in, and Jimmy got his leg hurt. After the injury, Jimmy’s leg was never again the same. Running was no longer an option, and Jimmy walked around with a walking stick, hence his nickname “Jimmy the Stick”. So he retired from the running game, opened a speak, and has been doing decently for himself.

But then everything goes to blazes. An old criminal pal of Jimmy’s, Walter Spencer, gives him a call and asks him to come over to his rural New Jersey home ASAP. The Lindbergh baby has just been kidnapped, and Spencer’s hysterical wife is convinced that their child could be next. It’s nonsense, of course, but Spencer has to go to a very important meeting out of state. So Jimmy gets hired to protect the kid and to keep order around the house.


And then weird things happen. A macabre discovery awaits Jimmy after he sees Spencer off, and it seems to be a warning that someone might indeed intend to harm the little kid. Then the local drunk gets found naked, shot, and nailed to a tree – talk about overkill! Before long, thugs are converging left and right, Jimmy has to deal with trouble back at the speak, and everything just goes nuts (to put it vaguely and without spoiling too much).

For what it’s worth, Jimmy the Stick is a decent read. It’s not the greatest read I’ve ever come across, but it’s far from the worst. It’s decent, and when you take it for what it is—a hardboiled mystery story—it’s not bad at all. Here’s the trouble: I was expecting something entirely different. And I’m afraid fellow reviewers are to blame. What got me interested in this book were the positive reviews I kept coming across. They kept stressing that this book felt like a cross between Dashiell Hammett and Agatha Christie, and fool that I was, I took them at their words.

But when you say something like that in a review, what kind of impression are you giving your readers? I was expecting something written in the Hammett mould, perhaps with a hero who isn’t entirely on the side of the angels. I got that. I was expecting a webby plot. I got that. And there’s a country house. I think that’s the reason people made the Agatha Christie comparison. Unfortunately, that’s not really the case. There’s nothing apart from the country house that even remotely suggests the Christie touch. Sure, there's the Lindbergh kidnapping and that inspired one of Christie's most ingenious plots, but it's told from a hardboiled POV without something to really suggest Christie behind it.

At first, I thought to myself: “Oh! This is a really cool idea! Throw the hardboiled detective of the Hammett/Chandler school into a country house mystery and watch these guys, used to tough thugs, have to deal with a more ‘genteel’ (for lack of a better word) sort of crime. This could poke fun at the conventions of both the Christie and Hammett schools of mystery!” Instead… I got a pretty conventional hardboiled mystery, which didn’t use any of those ideas I thought we’d be getting. Part of it takes place in a country house, to be sure, but that does not make an Agatha Christie-type novel. Ross Macdonald’s The Drowning Pool takes place largely in a small village and country house – does that make him a “cozy” author? Of course not!

None of this can be blamed on Mayo, but all this contributed to my disappointment. Also, I have one major criticism: Jimmy is a lot more interesting once he has become Jimmy the Stick. Whenever we enter flashback mode, he goes back to being Jimmy Quinn and I can’t think of anything really distinctive about him in that stage. He just has the usual backstory about a troubled background, and then for good measure we get some lovely scenes where an evil nun and a pedo priest try beating and raping him respectively. These clichés… really… get on my nerves lately. Either way, it’s only when Jimmy gets himself injured and has to learn to fend for himself all over again that I started to get really interested in the character.

I’m sounding really negative about this book, but I don’t mean to be. I’m not particularly enthusiastic about it, but it is a decent enough read. I guess this just serves as a warning to fellow reviewers: if you’re going to make a comparison in your review, be sure to know what you’re talking about. Don’t just call an author the literary heir of Chandler, Hammett, Christie, or Robert B. Parker in order to be nice, even if the book in question has nothing to suggest the author in question. Had I know this was a conventional hardboiled mystery, my approach to the book would have been entirely different and—who knows?— I might have liked it more. But I was expecting a Christie plot told in the Hammett style, and I just didn’t get that. Instead, I got a Hammett-style plot in an imitation-Hammett style. If that sounds like your cup of tea, you’ll probably enjoy Jimmy the Stick just fine.