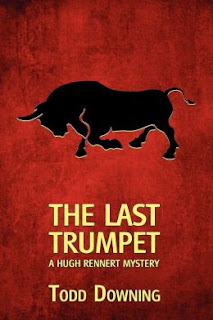 It seems that back in the 1930s, bullfighting was a lot more socially acceptable than it is today. For in Todd Downing’s The Last Trumpet, Hugh Rennert (a retired U. S. Customs Service agent and Downing’s series detective) does not hesitate to be seen at a bullfight in Matamoras, Mexico. But the social excursion quickly turns into a serious business when bullfighter Carlos Campos dies horrifically, gored by a bull.

Only it seems that the death was not accidental. Before he succumbed to his injuries, Campos accused someone in the crowd of blinding him by shining a mirror into his eyes. The police attempt to make a search but they are thwarted in their efforts. But it’s a good thing Hugh Rennert was present – he undertakes the investigation and discovers that Campos was not the first casualty. Nor will he be the last…


It seems that someone is targeting witnesses to a horrific train crash that injured a man. The railway company responsible offered to pay an exorbitant sum every week of his life, assuming he would die soon. Only he outfoxed them and has remained alive ever since. And it looks like the company will want to contest the payments in court in the near future…

The Last Trumpet is rather different from Vultures in the Sky. In the latter book, the claustrophobic atmosphere was a key element of the book and Todd Downing really built up the tensions and the atmosphere. The Last Trumpet is a bit more straightforward a whodunit, without attempting to be the same kind of book as Vultures. Indeed, although several individual scenes are atmospherically brilliant, such as the opening at the bullfight, the book is far more devoted to the investigation than to atmosphere.

And it’s an interesting investigation! The plot is suitably complex and Todd Downing once again manages to hide the murderer in plain sight. Downing knows how to draw your attention to the right clues and you dismiss them while clinging desperately to your red herrings, as though they were the real deal. And there are plenty of red herrings to go around in this book.

I was completely fooled by the choice of murderer, but what interested me far more was the motive. I don’t want to give too much away and I refuse to play the “give cutesy hints via wordplay” game, so I hope you will forgive my vagueness. But the killer’s motive is both believable and chilling, and it’s interesting to see this type of motive in a Golden Age mystery.

Overall, I highly recommend The Last Trumpet. This is an excellent read and a wonderful detective story, with an ingenious solution to a fascinating problem. The plot twists, turns, dips, dives, bobs, weaves, and by the end you’ll look back and be shocked to see that everything fits into a snug little quilt. You’ll also find several terrific moments of local colour and atmosphere, such as the opening bullfight. If you’re a fan of this kind of mystery, you won’t be disappointed.

Note: As with Vultures in the Sky, I got a copy of this book from Coachwhip Publications in exchange for an honest review. Coachwhip consistently delivers high-quality books and this one’s no exception. Like all the other Coachwhip books I’ve bought, the binding it tight, the text is easily legible and the font is elegant. The editing and proofreading are also top-notch.  For more info on these books, you can go to Coacwhip’s website here.