The Adventure of the Distraught Doctor

Written by Patrick
"Ha! You put me off, do you?" said our new visitor, taking a step forward and shaking his hunting-crop. "I know you, you scoundrel! I have heard of you before. You are Holmes, the meddler."
My friend smiled.
"Holmes, the busybody!"
His smile broadened.
"Holmes, the Scotland Yard Jack-in-office!"
Holmes chuckled heartily. "Your conversation is most entertaining," said he. "When you go out close the door, for there is a decided draught."

– The Adventure of the Speckled Band 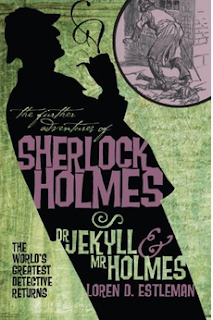 I have a confession to make: I got a little sidetracked. I was intending to review a bunch of books where Sherlock Holmes meets Count Dracula. As it turns out, this is not going according to plan. I’ve already made side trips into Holmes meets Poe territory and Holmes vs. the Ripper lore. The next book I’ll review is another Holmes vs. the Ripper novel. And today’s book is another one by Loren D. Estleman in which Sherlock Holmes is inserted into a famous Victorian story. It’s Dr. Jekyll and Mr. Holmes. (Oddly enough, Jekyll and Hyde were featured in another Sherlockian story I recently read, but in a very different capacity.)

This book in many ways mirrors the spirit of Sherlock Holmes vs. Dracula. Here, Holmes is contacted by Gabriel John Utterson, a lawyer and a friend of Dr. Henry Jekyll. Utterson is concerned about his friend, because Dr. Jekyll has just drafted up a will leaving all his property to the young scoundrel Edward Hyde. Hyde is a bounder in every sense of the word, inspiring hatred in every person he meets. He has no friends, and the only reason he is tolerated on the social scene is because of his money. Yet all of his money seems to come from Dr. Jekyll, and this is slowly casting a shadow on the good doctor’s name. Utterson wants Holmes to investigate the connection between Jekyll and Hyde, and to release the doctor from the evil man’s grip. 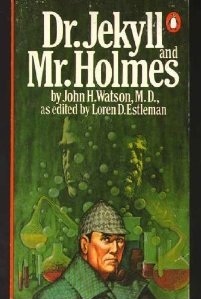 Dr. Jekyll and Mr. Holmes follows the story of The Strange Case of Dr. Jekyll and Mr. Hyde very closely, as far as I can recall. I don’t know if I read the story before – it may have been one of those “Great Illustrated Classics” that I read as a youngster before discovering that the classics themselves were much, much better. But the story as I recall it is adhered to faithfully, and it is told in the spirit of Stevenson’s original tale – keeping the connection between Jekyll and Hyde a mystery until the end, when we hear the full story.

Pretty much every reasonably intelligent person knows the secret of Dr. Jekyll and Mr. Hyde. Even if you’ve never read the story, it’s such an infamous one that the twist has become ingrained in our culture. As a result, the story doesn’t surprise you with an ingenious twist ending. It’s the same ending you’ve known for years. But, as Dr. Watson tells us, the reason he and Holmes are not in Stevenson’s version of events is because they were so shocking that a Victorian audience could only accept the tale as though it were a work of fiction.

As a result, the interest in this story is seeing how Holmes slowly builds up his case, and how he comes to the inevitable, yet fantastic, conclusion. I liked this story more than Sherlock Holmes vs. Dracula. Although the events are just as fantastic, having Holmes in this story is slightly more credible. The writing has also improved – this feels more like a Sherlockian pastiche, and Estleman really nails Watson’s voice with the narration. (There’s also a really fun introduction from Estleman, the “editor” of Watson’s manuscript, where he recounts how it fell into his hands.) 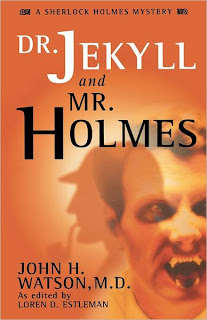 I guess what I like most about this story is how much Estleman obviously loves Sherlock Holmes. This is a cerebral story in which Holmes must track down Mr. Hyde by navigating the minds of fellow men. Through intelligence and wit, Holmes must conquer his prey. It isn’t nearly as action-packed as Sherlock Holmes vs. Dracula, but there are occasional action sequences. Yet this is above all a tribute to Holmes’ intelligence and how the Great Detective could use it to solve even the most outlandish of mysteries.

Overall, Dr. Jekyll and Mr. Holmes is a triumph. The writing has improved since its predecessor, the story is a terrific tribute to Holmes’ intellect, and although the story is a familiar one it never bores the reader. Ah, if only more pastiche authors could channel Estleman’s obvious love for Holmes, the world of Sherlockian literature would be a much better place than it is now…