The Adventure of the Sanguinary Count 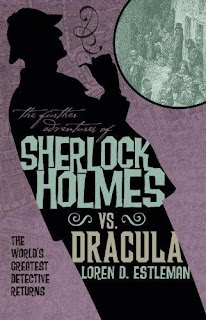 I was never much of a fan of the idea of Sherlock Holmes meeting Count Dracula. The only thing they really have in common is that they were both popular characters written at around the same time period. Apart from that there’s nothing. They inhabit separate universes. Holmes is the ever-rational man who discounts all supernatural explanations as a matter of course, while the
world of Dracula is one of terror and superstition.

But somehow, Holmes vs. Dracula became a thing. There are plenty of takes on this throughout Holmesiana, and a quick Google search of “Holmes vs. Dracula” will turn up dozens of stories. And today I’m reviewing one of the very earliest – if not the first – examples of this kind of novel, Loren D. Estleman’s Sherlock Holmes vs. Dracula.

As the title implies, this book’s whole premise is basically inserting Sherlock Holmes into the events of Bram Stoker’s Dracula. It’s quite cleverly done. It turns out that Bram Stoker and Abraham Van Helsing teamed up and left Holmes out of the story in order to make Van Helsing look better. But as it turns out, Holmes gets involved in the adventure of the sanguinary count when a Russian ship, the Demeter, arrives on English shores. Only the Demeter is piloted by a dead man, and the rest of the crew has disappeared, nowhere to be found. But what about that mysterious dog which leapt off the ship when it landed?

An addendum to the captain’s log is discovered, but it only confuses matters further, as it seems the late captain was insane... Or was he? Sherlock Holmes is on the case, and using his unique powers of observation and deduction, Holmes connects the Demeter mystery to the strange attacks of the “Bloofer Lady” months later… All this eventually leads to Sherlock Holmes meeting Count Dracula face-to-face… 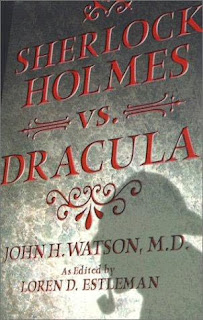 Sherlock Holmes vs. Dracula is about as good as you can reasonably expect it to be. I was genuinely surprised how well Loren D. Estleman captured the spirit of the original canon. Holmes is dealing with supernatural threats he never encountered in the original canon, but like René Reouven with his giant rat of Sumatra, Estleman manages to beautifully integrate fantastic elements from another genre into the story. Holmes himself comes to the most logical conclusion, no matter how fantastic it may seem, and it really puts the test to his maxim about eliminating the impossible.

Surprisingly, it is Dr. Watson who is more skeptic than Holmes. When the two finally meet Abraham Van Helsing, Watson is convinced that the Dutchman is a charlatan, while Holmes treats Van Helsing as an intellectual equal. It’s an outstanding moment: Watson listens in disbelief as Holmes and Van Helsing put the story of Dracula together between themselves.

Unfortunately, it’s in the final act that we finally see the cracks show up. There are several exciting chase scenes to end it all off, but Estleman does something that practically every pastiche author has done to death: he kills Holmes off for a few pages, has Watson mourn his death, and then brings the detective back to life (much to Watson’s joy)! And then, as if that wasn’t enough the first time, we get to do the same thing with another character, who stays dead longer but still comes back to life safe and sound, because nobody on Holmes’ side can die, not even minor characters he just met two chapters ago! Although I guess that’s unfair of me—if the chap had stayed dead I might instead be complaining about the cheap emotional stab on behalf of a character we hardly knew.

Basically, I’ve gotten very tired of sitting through Holmes’ death over and over again, and only to see him come back. It’s not like I hate Holmes – I love the character – but it’d be refreshing if someone killed Holmes off and just left him dead. Or how about writing a whole book around Holmes’ murder at the hands of some enemy? Or how about – even better – not killing Holmes off at all? It’s an ineffective scene that really kills pacing – we know Holmes is coming back because (a) there’s still plenty of time left in the book and (b) Holmes is going to stick around until at least WWI.

However, it’s remarkable, in a sense, that this is my biggest complaint about the book—at least, the biggest one that I can safely reveal. There are others – I have major problems with the third act, especially “the question” that Dracula asks Watson, a scene I did not like at all – but talking about these issues would require me to spoil the book, something I refuse to do. Overall, Sherlock Holmes vs. Dracula is a surprising triumph, really managing to blend Count Dracula into a Holmes story while keeping it all in the writing style of Conan Doyle.

What I really liked is how closely Loren D. Estleman sticks to the plot of the original novel. Minor details from the novel can show up as major clues, and it’s great to spot these similarities. I have to admit Count Dracula didn’t scare me like the original character did (and still does), but the novel’s emphasis is not on horror, so that’s understandable. It’s basically a huge crossover so that fans of the original works can see characters like Holmes and Van Helsing interact. As crossovers go, it’s a great example of how they should be done, and it even manages to throw some genuine surprises at you in the process. The third act is on the weak side, but I can live with it.

You think you know the plot of Dracula… but do you really know it? Pick up this book and find out. And please join me in my next Holmes review for a look at one of the most fascinating and irritating Holmesian pastiches I’ve ever read.