Written by Patrick
Looks like I picked the wrong week to quit smoking.
—Steve McCroskey, Airplane! 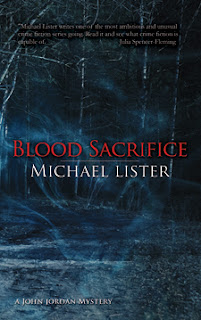 After a particularly bad murder investigation (alluded to but never out-and-out spoiled), investigator-turned-prison-chaplain John Jordan goes to a secluded retreat centre, St. Ann’s Abbey, in the town of Bridgeport. His previous adventures have left him shaken, his marriage is a shambles, and he now wishes nothing more than to regain his inner peace of mind. He sure picked a wrong week to try, as he finds himself in the thick of a murder investigation in Michael Lister’s Blood Sacrifice.

This is my first encounter with author Michael Lister, but I don’t think this is a series that needs to be read in order. There were allusions to things that happened in other cases, and although I would probably appreciate these allusions more if I knew what they were alluding to, it isn’t a vital part of the book, nor was it spoiler-happy about previous entries in the series. And, as mysteries go, Blood Sacrifice has got one or two really good ideas at its core.

The murder victim was young Tammy Taylor, a hypersexual heiress to the Gulf Paper Company fortune. It seems she was sleeping around with everyone she could get her hands on, and after a while someone had enough and savagely murdered her. The problem is that the murderer appears to be elderly Father Thomas, discovered unconscious at the scene of the crime with buckletloads of circumstantial evidence pointing towards him as the girl’s killer. But when Father Thomas regains consciousness, he insists that he isn’t a killer – indeed, he claims he was trying to save the girl’s life as well as her immortal soul. You see, Father Thomas claims that Tammy Taylor was possessed by a demon, and he was attempting to exorcise the demon. But he was ill-prepared, so he claims, and as a result was no match for the demon inside the murder victim.

It’s a wonderful idea for a murder mystery, as John Jordan must investigate whether Tammy really was possessed, or was she mentally ill or under the influence of drugs or something else? The book is at its best and most intriguing when it focuses on this plot, with some genuinely eerie moments suggesting the supernatural. These segments are very well-written and had me eagerly reading on, wanting to find out what happens next.

Unfortunately, the book has two major flaws. The first problem is the character of John Jordan himself. He is an interesting protagonist, but I don’t know if Michael Lister thinks he is interesting enough. To make sure the reader realizes just how interesting John Jordan is, Lister halts the proceedings on the story multiple times to bring you John Jordan’s counselling sessions, where he shares his hopes, dreams, doubts, fears, etc. And everything comes grinding to a halt for these scenes. Many of them are ineffective and should have been eliminated. After a while, I got very tired of seeing John Jordan’s hopes, dreams, doubts, and fears and found myself looking at my wristwatch wondering how much more time would be spent on this side plot. It meanders, doesn’t really go anywhere, and is easily the dullest of the book.

The other major flaw is that the author’s ingenuity and creativity seem to dry up by the end. Throughout the book we have a genuinely creative scenario and a fascinating mystery: was the girl possessed? Is possession possible? Or was it a case of mental illness misdiagnosed by religious hysteria? It carries shades of the Anneliesse Michel death (which oddly enough is never mentioned). The author’s clearly read up on exorcisms and demons and these talks are genuinely fascinating. The mystery presented as a result is an ingenious one. Unfortunately, the solution is nowhere near as ingenious as the problem itself. Indeed, many questions are left unresolved, but that’s because John Jordan can then use these unresolved questions to ponder on how life is one giant unexplained mystery. Symbolism!!!

I don’t know, I’m very tired of writers taking the easy way out, saying life isn’t as simple as a detective story so why should detective stories give you answers? To answer that rhetorical question, it’s because giving answers is the detective story’s raison d’être. Questioning this would be the same as questioning the realism of characters breaking out into song in a musical, and as a result cutting all musical numbers out of musicals in order to reflect reality more accurately. Why would you want to do it? While this kind of ending can be done on occasion, there’s a right way to do it, there’s a wrong way to do it, and there’s the Raymond Chandler way of doing it (i.e. “Oops, I forgot!”).

So although I enjoyed much of Blood Sacrifice, the frustrating ending forces me to retrospectively downgrade my enjoyment of what came before. It’s not a bad book – although it meanders a bit during the Character Analysis masquerading as counselling - the plot idea was a solid one and the mystery John Jordan investigates is genuinely intriguing. I really just wish there was a more complete ending to this one.