The Acquisitive Chuckle II: A Desperate Attempt To Milk Some More Pageviews Out Of This Recurring Series Of Posts

Written by Patrick
It's been a while since the last "acquisitive chuckle" post from me, in which I show off the newest additions to my library. In fact, the last time I did this, the series went through an unnecessarily-gritty reboot. In part, this was me trying to deal with all the unnecessarily gritty reboots floating around. It was also my attempt to deal with the confused numbering of the series. But I'll link to them all at the end of the post either way, so you can see the way this series has evolved over time.

Anyways, where was I? Oh yes, my newest acquisitions. I was recently visiting relatives in my old hometown of Windsor, Ontario. There's one bookshop there which I make a point of visiting whenever I can. My visits are separated by three-four months, and as a result, they always have something of interest there. This visit was no exception. According to my sister, who witnessed the carnage, I was worse than a little kid at a candy store, jumping in and out of aisles, giggling with insane glee as I pulled one book after another down from the shelves.

So just what kind of haul did I get away with? Well, let's get started with the meat of the post: 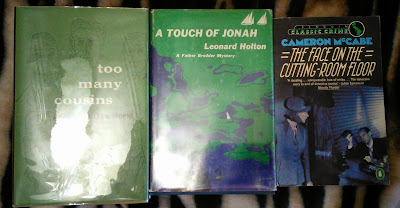 From left to right, the books pictured above are Douglas G. Browne's Too Many Cousins, Leonard Holton's A Touch of Jonah, and Cameron McCabe's The Face on the Cutting-Room Floor. I loved Holton's The Saint Maker, which I read earlier this year. McCabe's book got a lot of praise from Julian Symons in Bloody Murder. And Browne is a name I'm familiar with from Curt Evans' essay Was Corinne's Murder Fairly Clued?, in which one of Browne's books (not this one) plays a major role. 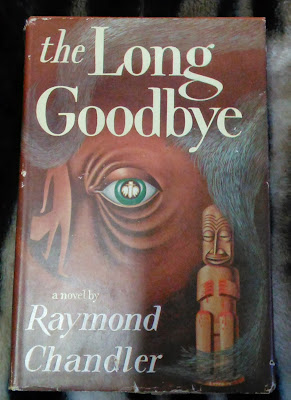 It might come as a shock to anyone who remembers how much I hated the book, but I decided to purchase my own copy of The Long Goodbye. As it turns out, this isn't a first edition -- a careful search turned up that it was a book club edition -- but that makes no difference to me. The cover is still gorgeous and the voice at the back of my head said it'd look great on my shelf. As for my negative review, well, I was taking issue with Chandler on grounds that were, in retrospect, hugely unfair, even though I was convinced (at the time) that I was right. I really should give Chandler and this book in specific a second shot. 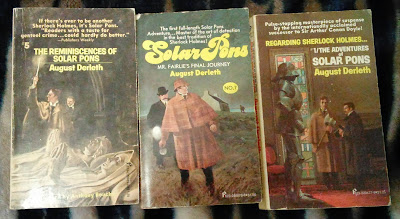 Above are three books by August Derleth, all starring his detective "Solar Pons" (who is basically Sherlock Holmes but not Sherlock Holmes, from what I hear). They are (from L to R) The Reminiscences of Solar Pons, Mr. Fairlie's FInal Journey, and The Adventures of Solar Pons. I've never read these books but look forward to them. 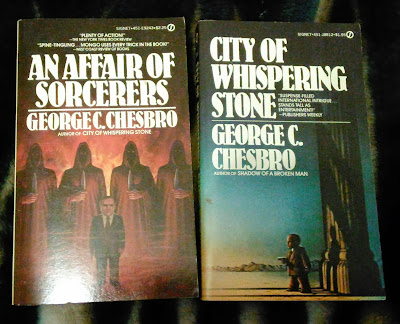 My first taste of Chesbro came with the deliciously surreal The Beasts of Valhalla. After that kind of whizz-banger of an introduction, can you blame me for going out and getting a pair of his books? I got these books - An Affair of Sorcerers and City of Whispering Stone - for only one reason: they have kick-ass titles. No, really, I love the sound of these titles, and I want to know what exactly is going on from that alone. 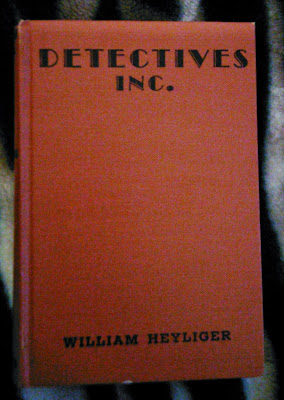 William Heyliger's Detectives Inc. was one of the books I got from the basement of the bookstore, which is devoted to hardcovers. This one caught my eye because it was so obviously old. On the inside is an inscription, which comes complete with its own Eerie Coincidence (brought to you by the ghost of Harry Stephen Keeler):

Seeing how my name is Patrick, I decided then and there that it was meant to be, and I added the book to my pile. 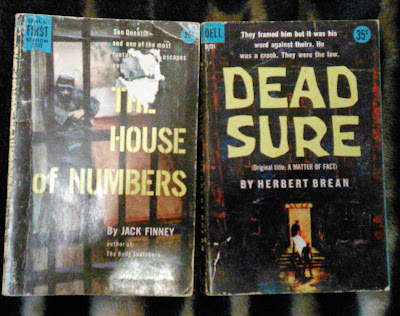 The books pictured here are Jack Finney's The House of Numbers and Herbert Brean's Dead Sure. All I know about Finney is that he is the guy behind the story that inspired Invasion of the Body Snatchers. I've never read any of his fiction, but I've heard great things (especially from Jon L. Breen in the collection A Shot Rang Out). As for Brean, the name had a vague familiarity to it, so trusting my wild impulse, I purchased the book without remembering why the author's name was familiar. 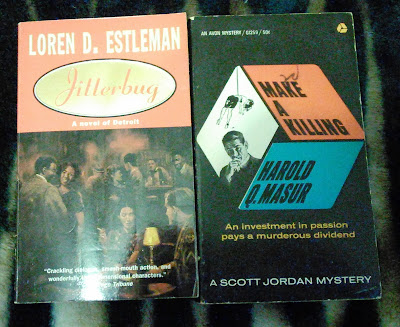 Loren D. Estleman is not an unfamiliar name to me, as I've read his Sherlock Holmes pastiches (in which Holmes meets Dracula and Dr. Jekyll/Mr. Hyde). I went with Jitterbug because the story sounds interesting. As for Harold Q. Masur, I've heard good things but have yet to read any of his books, so I decided to pick a book which I'm pretty sure I don't own yet, Make a Killing. 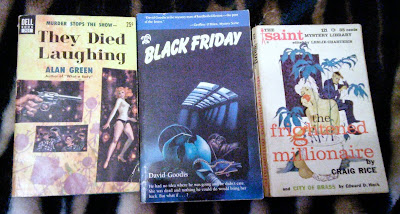 I was excited when I came across Alan Green's They Died Laughing, a book which I was half-convinced was merely a myth. I enjoyed Green's debut mystery, What a Body!, which is an excellent comedy and an interesting (but flawed) impossible crime novel. David Goodis, represented here by Black Friday, is not an unfamiliar name, but I have yet to read any of his books. As for the third book, it comes from The Saint Mystery Library, and it's a Craig Rice story entitled "The Frightened Millionaire". As someone who loves Rice's work, this was a very exciting purchase indeed.

Well, folks, that's what I left the store with. Hopefully these books live up to the promise of whatever-it-was-that-convinced-me-to-buy-them! Hope you enjoyed the piece!