Written by Patrick
…And unmoor’d souls may drift on stranger tides
Than those men know of, and be overthrown
By winds that would not even stir a hair…
—William Ashbless 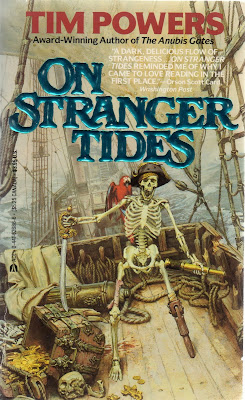 John Chandagnac is off to the New World aboard the Vociferous Carmichael. He has only one thing in mind: he wants to find his uncle, Sebastian Chandagnac. But this will not be a happy family reunion. It turns out that Sebastian Chandagnac is a ruthless criminal. He claimed that his poor brother, the rightful heir to a fortune, was dead, and made off with the cash. That brother, John’s father, was a puppeteer, and ended up dying a pauper, from starvation and the cold. John is furious and wants to get to his uncle, reclaim the fortune that rightfully belonged to his father, and get even.

But you know what they say about the best-laid plans. John’s plans for revenge are suddenly halted when his ship is attacked by a gang of pirates, led by the infamous Philip Davies. And they weren’t working on their own: a few of the Carmichael’s passengers were in league with the pirates, helping them to take over the ship. One of these is Benjamin Hurwood, an eccentric one-armed professor with a beautiful daughter named Beth. When Davies murders the Carmichael’s former captain, Chandagnac, in a fit of fury, attacks the pirate and wounds him. As a result, Davies allows the other passengers to go free, but John Chandagnac is given a different choice:


“Join us, wholly adopt our goals as your own, or be killed right now where you stand.” 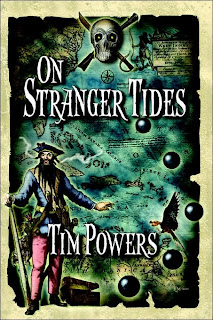 Obviously, John Chandagnac does not want to die, and so he decides to join the pirates, who promptly re-baptize him as “Jack Shandy”. Now part of the crew, Shandy joins in on a bizarre adventure. It involves zombies, Blackbeard, the fountain of youth, and voodoo. And describing any more of the story would be positively criminal. Because the book in question, Tim Powers’ On Stranger Tides, is an absolute delight from start to finish.

This is my first time reading a novel by Tim Powers, and I looked forward to it. If I must be honest about things, I still haven’t fully outgrown that stage of my childhood where I read absolutely anything I could about pirates (both fiction and non-fiction) and dreamed of becoming one. When I heard about the elements involved in this novel, I immediately sat bolt-upright and paid attention. These all sound like ridiculously awesome ideas on their own, but brought together? Would it even be possible to write a coherent narrative about all these things?

I’m glad to report that not only is it possible, but the book might very well be a masterpiece. To be sure, it’s been some of the most fun I’ve had all year long. Tim Powers has managed to craft a fascinating adventure novel full of twists and turns; despite my extensive training in detective novels, there were plenty of moments where I couldn’t guess what Powers had up his sleeve. 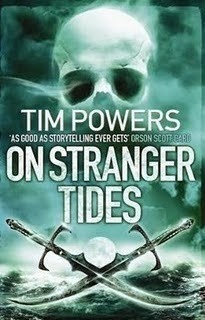 The really fascinating thing about this book is Powers’ approach to the story. He grabs a bunch of facts from history, such as Blackbeard’s final battle or the 1718 siege of Charleston (when Blackbeard blockaded the city, plundered any ships that tried to get through, and held the city for a ransom of medicine). He then ties these together and throws an alternative explanation on these events. For instance… what if voodoo and magic were real, and a force to be reckoned with among pirates? Suddenly, you’ve unlocked a treasure chest full of possibilities, and Tim Powers is able to go through these possibilities with glee.

I must admit, I have no idea what the role of the supernatural was for pirates. Maybe they scoffed at it. Maybe they feared it. It never really came up in my reading, and the reading I did on the subject was years and years ago (think grade school), so I can’t quite remember the details any more. But from the details I do recall, it seems that Tim Powers has been quite faithful to history, not altering any more than is necessary to tell a good story (and that isn’t very much!). This is the kind of historical adventure that I love, because through its vivid details it can spark your interest in a historical period you might not have thought much of before. Heck, I think I might come back to pirates some time during this self-imposed mystery hiatus. I had a blast with this motley crew.

On Stranger Tides is a brilliant book. It’s an epic story which often kept me on the edge of my seat. I liked the unusual characters and the time spent developing them. I liked Powers’ approach to writing the book, which shares more with the mystery genre than you’d expect from the plot summary. And it was a fine adventure. I enjoyed myself, and at the end of the day, that’s all I can ask from any book. 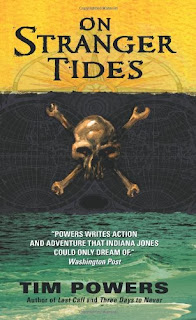 I wish I could dive into this book with more detail, but I don’t want to spoil it for anyone. It’s a cleverly-plotted book, and plot played a major role in my enjoyment. But perhaps you’ve heard of the movie adaptation? This book was adapted as the fourth Pirates of the Caribbean movie, On Stranger Tides. I saw the movie after reading the book and I enjoyed it, but it cherry picked only a few details from the book and largely invented its own plot, directly ripping off Indiana Jones and the Last Crusade in its finale. The stuff with the mermaids and the romance between the preacher and the mermaid was complete nonsense, regardless of the mermaid’s attractiveness, and was nowhere in the book. But the movie as a whole had some enjoyable action, excellent CGI, lavish sets, and that awesome theme song. Fans of the franchise might enjoy it, but anyone sick and tired of the series probably won’t change their minds. But if you’ve seen the movie, don’t let it colour your thoughts on the book— it really is an entirely different plot, even if it uses some of the same elements.