The (E-)Resurrection of a Master of Mystery 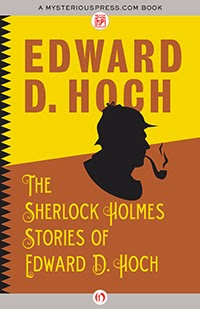 Edward D. Hoch was, quite simply, one of the biggest and best names in the mystery field for decades. He was also a rarity: an author who managed to make his bread and butter almost entirely through short stories, a form that is possibly more difficult to master than that of the novel. Hoch’s career was amazingly prolific, with hundreds of short stories to his name. Ellery Queen’s Mystery Magazine would not have been the same without its usual dose of Edward D. Hoch. In any anthology, Hoch could always be relied on to deliver a solid story. He was a terrific plotter: he could come up with fascinating situations, and then resolve them so elegantly that the reader could only stare in amazement at the work of a master craftsman.

So imagine my delight to discover that The Mysterious Press has brought out Hoch’s books in e-book form. Many of these are short story collections, but Hoch wrote a novel every once in a while, such as The Shattered Raven (which is among the books brought back into e-print). And one book in particular caught my eye: The Sherlock Holmes Stories of Edward D. Hoch, which collects all twelve of Hoch’s Holmesian pastiches. If any author out there could possibly do Holmes justice, it would be Hoch, and so I knew I just had to read this book.

Prologue: The Most Dangerous Man
This one’s a really short story which can be easily read in less than five minutes. I won’t describe the plot, but it functions nicely as a prologue to the collection. It’s fun, and that’s all you’ll get out of me.

The Return of the Speckled Band
This is a rather unlikely sequel to the classic The Adventure of the Speckled Band. The premise sounds ludicrous, and Holmes and Watson even remark on this: it turns out that Dr. Grimesby Roylott had not one, but two of the deadly swamp adders. When a gypsy swears revenge on his brother and takes possession of the second swamp adder, it isn’t long before Holmes and Watson are called in to resolve the situation. The premise really grew on me after a while and I ended up enjoying the story quite a bit: trying to write a sequel to such a classic Sherlockian adventure is a fascinating risk, and I appreciated it.

The Adventure of Vittoria, the Circus Belle
I felt very proud of myself over this story, because I solved it before Holmes unveiled the solution, and I think I might have even guessed the solution before Holmes did! The story revolves around a beautiful circus performer who comes to Holmes convinced that someone is trying to murder her. Holmes agrees to help her, but will he be too late to prevent a tragedy? The observant reader can solve this one more easily than some of the other cases, but it’s a solid story and a decent pastiche.

The Manor House Case
Although the collection does not tell you this, the story came from a fascinating anthology called Holmes Resurrected, in which authors wrote Sherlockian pastiches while imitating the styles of famous writers. Hoch took on the challenge by imitating the style of Ellery Queen (and, elsewhere in that anthology, William L. DeAndrea wrote a hilarious pastiche in the style of Mickey Spillane). In this story, Sherlock Holmes is summoned to solve the mysterious death of a publisher at the home of a famous explorer. Naturally, plenty of other things happen to complicate the matter, and it’s up to Holmes to make sense of the affair. It’s a solid story and it’s a fun tribute to both Holmes and Ellery Queen.

The Christmas Client
When a cleric named Charles Lutwidge Dodgson calls on Holmes on Christmas Day, Mrs. Hudson proves to be unusually friendly to the man. And Holmes and Watson soon find out that it’s because Reverend Dodgson is actually “Lewis Carroll”, the author of Alice in Wonderland. And he has a problem: he’s being blackmailed by an acquaintance of him, a certain professor of mathematics and author of The Dynamics of an Asteroid… This is a phenomenal story, with an intriguing central problem and a good twist ending. And it’s a worthy entry into Holmes-vs-Moriarty pastiche.

The Addleton Tragedy
A certain Dr. Harold Addleton calls on Sherlock Holmes with an intriguing problem involving an archaeological discovery of his in a barrow in the region bordering the Salisbury Plain. Soon afterwards, Addleton is warned of an ancient Druidic curse… and not long after asking for Holmes’ help, Addleton is found dead, burnt to a crisp. The story’s intriguing, but the twist is one of the weakest ones in the collection, using a technique that the series Murder, She Wrote used over and over again.

The Adventure of the Domino Club
Holmes finds himself in an intriguing situation when a young man begs for Holmes’ help. It appears that the man has visited the exclusive Domino Club, a “gentleman’s establishment” where fortunes can be made and broken over cards in a single evening. He also made the mistake of smuggling his girlfriend into the club (just for a laugh), and she keeps going back night after night to gamble. It’s a terrific story and proves that Holmes’ clients don’t need to come to him with ghastly murders, ancient curses, or suspected murder plots to make for a good mystery.

The Adventure of the Cipher in the Sand
It’s a bizarre case right from the get-go involving a body discovered near the Thames. Right by the body is a mysterious cipher scrawled into the sand, apparently by the dead man just before he expired. Holmes is on the case, of course, and the solution to the cipher is one that I really wasn’t expecting. (Then again, anyone who remembers my score from The Anagram Detectives is probably not surprised to hear that.)

The Christmas Conspiracy
This is a charming story in which Dr. Watson dresses up as Father Christmas to entertain the children. He takes the opportunity to call on his good friend Sherlock Holmes, and (as is tradition) it isn’t long before he’s involved in a case. A young wife named Elvira Ascott comes to Holmes because her husband has just been shipped off to fight the Boer war. And, almost coinciding with this event, a rich man named Mr. Dobson makes an aggressive offer for a piece of land she owns. The land itself is apparently worthless, and Mr. Dobson isn’t making any threats – no, no, everything is perfectly legal and above-board – but he is so insistent that she sign the papers as soon as possible that her suspicions are naturally aroused. It’s a terrific story with Holmes at his finest, and some terrific comic relief as well. However, if you can recognize one of the names in this story, you will probably be able to deduce why this apparently-worthless piece of property is being sought after.

The Adventure of the Anonymous Author
This should prove to be an easy one for Holmes. There’s no crime, there are no mysterious mongoose footprints, there’s no locked room. It’s just that The Strand wants to contact the anonymous author of an excellent detective story, an author who refused to give her real name. The Strand wants to publish the story in book form, but they need the author’s cooperation, and none of the letters after the first have been answered. Holmes is hired to find the anonymous author, and sure enough, he deduces that there’s something deeper going on. It’s another top-notch story, and again one that starts off with an apparently non-criminal situation. There’s also some good legwork from Holmes and Watson, and the solution to the mystery is a satisfying one.

A Scandal in Montreal
This is another attempt by Hoch to venture into sequel territory. This time, the story is a sequel to A Scandal in Bohemia. I must admit, I was never a big fan of the story: I don’t “get” why so many people find Irene Adler fascinating, and although I enjoyed Holmes’ ruse it struck me as a very touch-and-go sort of thing. So I really don’t get why Irene Adler keeps showing up in pastiches (unless it’s to rope in the female demographic?).

Now that I’ve gotten that off my chest, what’s this story like? It’s good. Irene Adler’s return is a fun one, and the scandal that brings Holmes to Montreal is certainly an ironic situation. And it’s also one of the few Sherlock-Holmes-in-Canada stories that is actually good – as I’ve remarked in the past, when pastiche authors bring Holmes to Canada, he tends to leave his brains behind at 221B Baker Street (nestled, perhaps, in his briar pipe?). It doesn’t happen this time, and the twist ending is genuinely surprising and well thought-out.

The Adventure of the Dying Ship
This story was the biggest surprise of the collection: not for its twist ending (which is decent) but because of Hoch’s risk in telling it. He ventures where few pastiche authors dare to tread by giving us a story narrated directly by Holmes in the first person. It turns out that, among the passengers on board the Titanic, there was one Mr. Smith… who was actually Sherlock Holmes in disguise! I dare not describe the story in much more detail, but it’s an intriguing plot with a good twist ending, and it’s also a loving homage to Jacques Futrelle, who is the real hero of this story. I have nothing but respect for Futrelle; his bravery aboard the Titanic is the ultimate example of manliness and the act of a true gentleman. Hoch pays him the respect he deserves.

And there you have it, The Sherlock Holmes Stories of Edward D. Hoch! It’s a book worth reading for any fan of Holmes and Hoch. This is the kind of book I bought a Kindle for. A very big kudos to The Mysterious Press for bringing this one out in e-book format!

Full disclosure: I was provided with a review copy of this book. The only thing asked of me in return was an honest review.

[The ghost of Harry Stephen Keeler strikes again!!! Guess who posted a review of this book just as I was putting the finishing touches on this post??? If you guessed the Puzzle Doctor, then you've probably already seen his post. If you didn't guess the Puzzle Doctor, then head on over to his blog to read his take on the stories. But seriously, somebody else needs to visit the West Side of the Internet to exorcise Keeler's ghost out of there.]