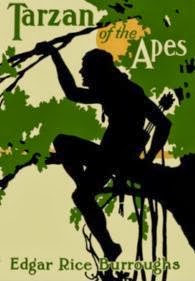 When Lord and Lady Greystoke both die – Lady Greystoke of natural causes, Lord Greystoke viciously killed by the ape king Kerchak — the child is taken in by a female ape named Kala. And thus, an English Lord is raised by apes. He learns of the ways of the jungle and how to survive there. He swings from vines, he fights all sorts of creatures for survival, and due to his environment is stronger than any man on Earth. If you haven’t guessed who I’m talking about yet, I’m talking about Edgar Rice Burrough’s creation: Tarzan of the Apes.

The story of Tarzan is a fascinating success story. Edgar Rice Burroughs went against the advice of all the marketing professionals and allowed the simultaneous release of Tarzan comic strips, movies, etc. In theory, this should have led to an oversaturation of Tarzan stuff, and the character should have declined in popularity and disappeared off the face of the earth. But Tarzan was a cultural sensation: people simply couldn’t get enough of him. And author Burroughs got to laugh all the way to the bank.

The first of the series, Tarzan of the Apes, is often silly stuff, but this is silly stuff of the highest calibre. I should have laughed my way throughout this entire book. Evolution doesn’t work as described. Race and gender, one could argue, are unfortunately treated throughout the novel (particularly a tribe of savage black men, who are hounded and frequently killed by Tarzan). And despite being a savage, Tarzan still demonstrates the nobility of his ancestors and will not engage in such activities as torture and cannibalism (because, good chaps, that’s awfully rotten, what?). There’s even an outlandish part of the novel where Tarzan learns to read, despite knowing nothing of the English language or its pronunciations. (It’s never explained how he then learns to write down his own name.) The whole concept of Tarzan seems a bit silly in this post-modern world (Or is it post-post-modern? I can never tell.) and the cynic within me should have had a field day… But to be honest, not only was my inner cynic silent, he couldn’t altogether help being captivated by the whole thing. Having read the book for myself, I can sort-of see just why Tarzan became such a phenomenon in the first place.

First off, it’s a damn good story. It rises to heights of imaginative absurdity at times, but it’s almost always compelling stuff. Tarzan’s adventures are interesting, high-octane stuff, full of action, fights, chases, etc. If you want an exciting, fast-paced story, Tarzan of the Apes is not a bad option. There are many threats to fight off, and Tarzan does a good job of it.

It’s also a story well-told. The descriptions and details are vivid, and the atmosphere is excellent. The jungle itself almost becomes a character: mysterious, wild, impossible to tame. Its darkest depths hold traps that spell inevitable doom for the ill-prepared traveller, but it’s a fascinating thing at the same time.

Tarzan is also quite an interesting character. You might assume that Tarzan wouldn’t make for an interesting character, because he seems like the ultimate male fantasy come to life. (I don’t like reading gender into my stories and I won’t go too deeply into that here.) Tarzan is the peak of physical perfection, his cunning is superior, he can kill a lion with his bare hands. You’d think this would make it hard to make him a relatable, sympathetic character. Not so. Tarzan is a man uprooted and separated from all other men. Both his parents died before he got to know them: the jungle is the only life he knows. And by ape standards, Tarzan is a perverse, hairless weakling. He cannot fully belong in either human or ape society; he has no idea where he’s from or why he’s here.

When Tarzan finds the cabin that belonged to his parents and discovers books everywhere, he forces himself to learn how to read and write even though he has no idea how these words are pronounced or what many of them mean. But this doesn’t help him read his father’s dairy: Lord Greystoke had the habit of keeping his diary in French, and as a result Tarzan cannot decode the “bugs” which are arranged in such mysterious patterns. Tarzan is an interesting character, because like so many of the most interesting characters of all-time, he is, at heart, a man searching for his place in the world. And he’s sympathetic enough that you want him to decipher the answer.

Some other humans show up eventually, and among them is Jane Porter. I must confess I found her father a much more fun character: the rather absent-minded Professor Porter has the habit of beginning pedantic conversations over nothing important, and while he’s having this most illuminating discussion he can often walk straight into the jaws of peril. It makes for terrific comic relief. Jane is a bit of a generic female character, but she shows surprising strength of character at one point, where she shows more deductive intelligence than everyone else around her. (I don’t want to share too many details.) 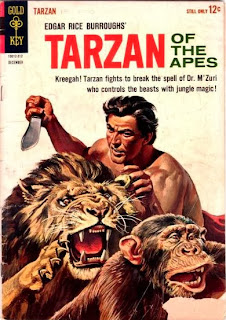 The Tarzan books have long been under fire for their depictions of race, and I can honestly understand why. Burroughs uses language that would not be accepted in modern day, but this is a product of the times in which he lived. But I’d argue that if you can look past the use of such language as the infamous “n-word”, you might be surprised. Burroughs isn’t using Tarzan to promote eugenics or the superiority of the white race; meanwhile, Jack London and H. G. Wells apparently have a “Get Out of Jail Free” card for these charges. (I swear I can never again look on White Fang or The Time Machine in the same way after finding out about their views on these matters.) Although there is a tribe of savage black men, Burroughs doesn’t tell you all black men are savage. In fact, on the contrary—Tarzan has to learn that lesson for himself when he first comes across black men who aren’t savage. Having learned that lesson, he later says that it would be ridiculous to judge all black men on the actions of a few of them, just like it would be futile to “decide that all whites are cowards because one has met a cowardly white.”

Women might also have a complaint to reigster, because Tarzan settles a domestic dispute among two apes by demanding that the female be more attentive towards her abusive male partner. But to that I say: we’re talking about apes. Tarzan is still, at this point, essentially an ape. He has never been in contact with civilisation. How is he to form such abstract thoughts as egality among the sexes, and why would the apes even adopt such a system? In fact, later in the novel, Tarzan comes across a human parallel to this scenario, where a domineering man has a hold over a woman and demands that she marry him. Tarzan treats this situation quite differently.

While these elements of race and gender aren’t unavoidable, when considered in the context of their times and the horrifying social theories that were quite popular among people who considered themselves part of a superior race, the result could have been much more disturbing and sickening to the modern mind. If you can keep an open mind about these things, I don’t think it’ll ruin the reading experience.

Overall, I really enjoyed my first literary exposure to Tarzan. I must admit there’s something fascinating to the character, and the plot was exciting and fast-paced. It was just-far-enough on the right side of outlandishness to keep me from choking on my disbelief. Tarzan of the Apes is an interesting read, and it certainly helped me to understand just why Tarzan became a cultural phenomenon. I liked the book and would be willing to read more in the series.