ARE YOU NOT ENTERTAINED???

Written by Patrick
It vexes me. I'm terribly vexed. 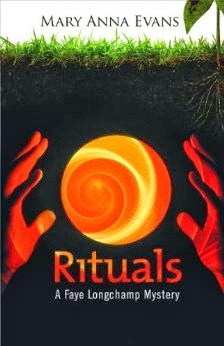 I really like the work of Steve Steinbock in Ellery Queen’s Mystery Magazine. Having taken over “The Jury Box” column from Jon L. Breen, Steinbock writes very good columns in which he shrewdly judges mysteries by their merits and gives you a good idea of just what you can expect from them. One review in particular caught my eye in the March issue of EQMM – it was a three-star review of Mary Anna Evans’ Rituals.

The plot sounded like one I couldn’t miss: consulting archaeologist Faye Longchamp and her adopted daughter are working in the picturesque town of Rosebower, New York, a town known for its long and storied connection to the spiritualist movement. Rare is the citizen who does not claim some sort of psychic power, and two of them, a pair of elderly sisters, invite the Longchamps for a séance. It’s a bit of an unnerving session, and an hour or so after it wraps up, the medium (a lifelong agoraphobic) crashes her car by Faye’s hotel. Here’s the intriguing bit: the medium somehow managed to escape a locked room in her home when it caught on fire (an “accident” of course) and drive all the way to Faye’s hotel despite her agoraphobia, where she finally dies of smoke inhalation.

It’s really, really annoying. I had a hard time warming up to Faye as a character. She’s irritatingly perfect as a character, perfectly kind and sweet and charitable to everyone and with a beautiful adopted daughter which everyone keeps telling her is beautiful and a hunk of a husband that everyone keeps telling her is a hunk and so forth. I don’t mind a detective not having crippling psychological issues – in fact, I usually find it refreshing – but instead of being annoyingly flawed, Faye goes the other way and is annoyingly perfect. Her adopted daughter is very badly written, sounding more like a collection of clichés from a 1970s sitcom. There’s a young 20-year-old man in this book who sounds more like a 13-year-old girl (and I write this with the expertise of a 20-year-old member of the dominant patriarchal class, long live the blessed name of masculinity).

But hey, thanks for dropping by and expecting a mystery. Now, let me instead talk to you about feminism and how awesome it is, and how intriguing spiritualism is, and how it’s ridiculous to think that Faye is a white woman because she’s proud of her mixed racial heritage (even though she brings it up only when she decides to be offended at someone who thought she was white), and also that aliens did not build the civilisation Columbus found when he sailed the ocean blue. I get it – the author’s done her research. Unfortunately, this research is front-and-centre in the foreground instead of being an intriguing background to the mystery itself.

And how is the mystery? Based on my mature and intelligent analysis: bleh. I’ve read much better. On its own, the mystery is very sub-par. There is absolutely no surprise to be found in these pages. The “locked room” only turns out to be a locked room in the finale, and it is resolved as soon as it is brought up, with an unimaginative cliché that was old when John Dickson Carr first took up his pen. There are even a few plot holes for us to find, such as some “spiritualist” jiggery-pokery which is never explained (oooh, spiritualism is so mysterious and intriguing…) and a bizarre ending in which a fully-grown woman can totally crawl through a narrow space, but her younger and smaller daughter couldn’t possibly go through. (Huh?)

But hey, maybe the writing can redeem this one, right? Nope. This book is very casually written, so casual that it sounds like it was written over a series of coffee breaks. For instance, archaeologist Faye describes herself as a “huge history nerd”. Someone else has a “huge garden and an even huger greenhouse”. Something unpleasant won’t be nasty or disgusting or troubling, it’ll be “icky”. I don’t demand that every author write in a formal, humourless style, but this prose took itself so lightly it produced several eye-rolling moments that did not go well with the silly characters or bad plotting.

Overall, I didn’t like Rituals at all. I found it quite grating and it was a chore to get through this one. I can’t honestly recommend it and don't see myself returning to this series anytime soon. I can’t even dishonestly recommend it. There’s nothing intriguing to be found in this one for the locked-room aficionado, and I’ve seen far better suggestions of the supernatural elsewhere. You’re better off reading one of Paul Doherty’s “Canterbury Tales” mysteries, which make the supernatural threats credible and which have solid plotting to them. With all due respect to Steve Steinbock, I can’t see how he gave this one three stars to begin with. But I guess that’s the beauty of reviewing – you can disagree even with people whose taste you find impeccable, and that can spark intriguing conversations. If you’ve read this book and enjoyed it, then I welcome your input – just what was I missing?