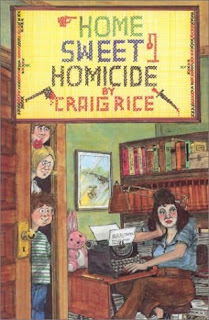 I forget where I read this quote, but I remember reading a brief outline on Craig Rice, where the author described her as having written the binge, but lived the hangover. I cannot think of a more perfect way to sum up the work of an extremely funny mystery author who led a tragic and far too short life. Rice’s mysteries are often drowned in alcohol from start to finish, with detective teams that get a lot more talented after a few drinks…
The usual alcoholic drinks are replaced with chocolate malts and cokes in Home Sweet Homicide, but the result is just as hilarious and wonderful, and ultimately, Home Sweet Homicide is a true masterpiece.
The story revolves around the three Carstairs Children: Dinah, 14 years old, is the brains of the operation. April, 12 years old, uses her charms to extract information. Archie, a strapping lad of 10, is the only member of the family able to save money, and acts as the banker. (He also has a group of friends known as the Mob ready to help the kids out— for a price, that is…) Their mother, Marian, is a mystery author who is constantly pounding away at her typewriter, unfortunately neglecting her children in the process.
As the story opens, the Carstairs children wonder just how wonderful it would be if their mother Marian could solve a real-life murder. The publicity would be enormous and entirely beneficial, and perhaps she could spend more time with them in the process. That’s when they hear the gunshots next door and see two cars speed away. They later find out that their neighbour, Mrs. Sanford, has been gunned down.
Mrs. Sanford was far from a nice lady. She was grouchy and resented the children’s presence, yelling at them when they were forced to go into her yard to retrieve something. In addition, it turns out she was probably a blackmailer (hey, they have to live next to someone!). The children decide that they will solve the mystery and let their mother take the credit—and when they meet the detective in charge of the case, Bill Smith, they decide that they will also play matchmaker for Marian, setting her up with the detective in question, who shares his name with one of her fictitious detectives.
Poor Bill Smith never stands a chance, as the children recall the sleuthing techniques of Mother’s books and set to work, lying to the police about the time they heard the shots, giving them false testimonies to send them on wild goose chases, and even hiding the main suspect in Archie’s playhouse! At the same time, they do their best to set him up with Marian— their initial encounter, far from cordial, simply encourages them. After all, one of Mother’s books says that a hostile first encounter is the surest sign of a successful courtship!
Assisting Smith in the investigation is Sgt. O’Hare, who keeps reminding his partner that he has raised nine kids of his own, and he knows. He and the children have a rocky relationship— after April throws a fit, he comments to Bill Smith that it is the phoniest fit of hysterics he’s ever seen, which immediately makes him an enemy in the eyes of the kids. He attempts to bribe them with chocolate malts, but it is quite clear in the end who comes out victorious.
The plot twists and turns and keeps you on the edge of your seat. In a word, it is brilliant, and it is also wildly funny. This is such a rare and wonderful experience; this book is hands-down one of the best mysteries of all-time. Its sense of humour is excellent, and you have no idea how much self-control I’m exercising not to give away half the jokes here and now. Well, maybe just one:
“Don’t let that worry you,” April said, “they do that all the time.” Something had to be done fast (…) “All the time,” she repeated, “but only when they stand on their hands and flap their ears.”
“Especially every other Thursday,” Dinah said, catching on quick.
“But the round corners make it different,” April added.
“Oh, no, they don’t, only when it’s raining.”
“But you can’t get that any more.” April began speeding it up. “Besides, the rain makes it turn purple.”
“No, it doesn’t, not if you look at it cross-eyed.” Dinah speeded up, too.
“Oh, but if you do that, it’ll make the sun go down.”
“Not if the next two weeks are going to be Saturdays.”
The story is told entirely from the point of view of the three children, and these characters are brilliant, fascinating, and captivating. It is wonderfully told, with the problems of childhood taking precedence and yet the real world banging on the door, trying to intrude. I really don’t want to give too much away— this is an instance where the reader should be allowed to discover the wonders of this novel for his or herself. Overall, Home Sweet Homicide is a masterpiece, proving once and for all that murder and mayhem mix together excellently.
Surprisingly, Craig Rice pulled it off with only one innocent glass of sherry (before dinner) figuring in the proceedings.