I have quickly become very fond of the work of Margaret Millar, which is why I’ve started up this page. I already consider her one of the finest mystery novelists of all-time, and one who is unfairly neglected. Like my other author pages, this will serve as a bibliography of the author’s work, complete with some biographical information. It will also serve as a work-in-progress directory to my reviews of Millar’s works. I intend to eventually read and review all of Millar’s mysteries. Biographical information below is a very quick summary of a section in Atomic Renaissance: Women Mystery Writers of the 1940s and 1950s by Jeffrey Marks. This was carried out with the author’s permission.

Born Margaret Ellis Sturm on February 15th, 1915, Margaret Millar grew up in my current home town of Kitchener, Ontario. In fact, she attended the same high school that I did—Kitchener-Waterloo Collegiate and Vocational School—along with her future husband, Kenneth Millar (who rose to fame as author Ross Macdonald). Whether the school was as terrible then as it was when I attended is a matter for debate. 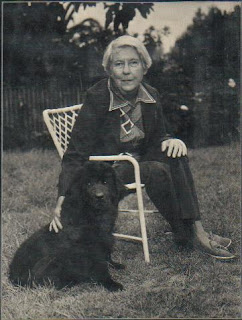 After graduating high school, Sturm went to the University of Toronto, majoring in classical scholarship. There she ran into Kenneth Millar again, who instantly became smitten. They began dating and were married the day after Ken’s graduation. Margaret chose to drop out of college to help Ken’s career.

In 1939, the Millars’ only child Linda was born. Margaret spent two weeks in bed following Linda’s birth and spent that time reading mysteries, which encouraged her to write her own novel. The Invisible Worm was published in 1941. Her mysteries went through a transitional period and became more suspenseful and psychological, especially compared to the relatively light-hearted Paul Prye novels. In 1956, A Beast in View won the Edgar for Best Novel. The next year, Millar served as president of the MWA.

In the early 1970s, the Millar suffered a series of losses. Their home, which was in the path of frequent California fires, burned down in 1970. Their daughter Linda also died that year, at the age of 31, in her sleep of natural causes. Linda had led a tumultuous life (see Atomic Renaissance for more detail) and this had taken a toll on the Millars. Her death affected them just as severely.

Kenneth Millar was diagnosed with Alzheimer’s in 1980 and died on July 11, 1983. That was the year Margaret received the MWA Grand Master Award and published her novel Banshee. She would write one more book, Spider Webs, released in 1986. In her later life she became legally blind and relied on a medical assistant. She died on March 29th, 1994. 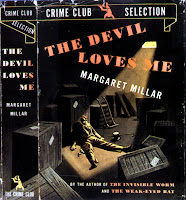 The Devil Loves Me (1942)
Paul  Prye was getting married to the love of his life, Miss Nora Kathleen Shane. What could possibly intervene? Why, attempted murder of course, when one of the guests, Jane Stevens, drops to the ground from atropine poisoning! A note is discovered, addressed to Paul, informing him that this was indeed an attempt to commit murder, and thus combine a wedding and a funeral. It isn't long before murder strikes decisively, when the corpse of Jane's brother Duncan is discovered, apparently having died from falling down a set of stairs while drunk...

Fire Will Freeze (1944)
The bus stops in the middle of a severe snowstorm in Québec.The driver gets out of the bus to fix the chains... but he never returns to the bus. The passengers, having waited for half an hour, decide to follow the driver's footprints, which lead them to a house in the middle of nowhere, inhabited by the cheerfully-insane Miss Rudd and her nurse Floraine. Floraine seems eager to get rid of the guests but decides to let them stay the night when they all offer to pay. How could they have possibly foreseen that it would be such an eventful night? It starts when the corpse of a cat is found, having apparently been stabbed by Miss Rudd with a pair of scissors...

Beast in View (1955) – won Edgar Award
Helen Clarvoe is being terrorized by a young girl named Evelyn Marrick, a malicious prankster who loves telephoning people and preying on their fears. In her despair, Helen turns to Paul Blackshear, her lawyer, to help locate Evelyn. But something doesn't quite add up-- half the people who know Evelyn are convinced she's crazy, while the other half believe she is an absolute angel who would do anything for her friends. Who is the real Evelyn Marrick and what is she up to? And Mr. Blackshear may want to hurry up and find her... because Evelyn has decided that she is no longer satisfied with just telephoning her victims... and she no longer draws the line at psychological torment either...

A Stranger in My Grave (1960)
It starts with a nightmare, wherein Daisy Harker discovers that she is dead. In her slumber, Daisy came across her own grave in the cemetery, which listed her date of death in 1955. But why should that be? Daisy cannot recall anything special about the day in question. Her husband tells her to forget about it, and her mother does the same. But then Daisy’s estranged father gives her a call. He asks her to pay a man named Steve Pinata, who has just bailed him out of prison. Daisy obeys, but her father gets cold feet and runs away from Pinata’s office, not wanting his daughter to see him in his current state. When Daisy arrives, she finds out that Pinata does investigatory work as well, and so she asks him to investigate her life and find her “missing day”...

How Like an Angel (1962)
Joe Quinn is a former casino cop, who loses everything all at once: his job, his money, his girlfriend. He manages to hitch a ride with somebody who drops him off in the middle of nowhere, directing him to the Tower of Heaven, a cult that obeys its master unconditionally and denounces the sinful pleasures of the world: money, electricity, and fuzzy pink slippers. Joe is treated kindly, especially by one of the women, Sister Blessing, who slips him some money on the sly and asks him to find out if a man named Patrick O'Gorman still lives in the town of Chicote. But she warns him only to find out if he still lives there, and not to attempt contacting him. Unsatisfied, Joe begins to dig further...

The Fiend (1964)
Charlie Gowen isn’t a monster by instinct. He’s a sensitive and caring person. He doesn’t want to hurt people. And he loves children. He doesn’t want to hurt them. He wants to protect them from harm. Take Jessie, for instance. She’s taken a few nasty spills on the playground and her hands are all bruised up. Charlie sees this, and he follows Jessie and her friend Mary Martha home, intending to warn Jessie’s parents to take good care of her. But you see, Charlie isn’t entirely normal. The doctors said it was okay for him to go out into the world, but he has been warned to keep away from children. His brother Ben is supposed to take care of him, make sure nothing else happens like it did that one time. You see, Charlie is a pedophile...

Beyond This Point Are Monsters (1970)