The Case of the Catholic Critic

Written by Patrick
Strictly speaking, I made my first professional sale when I was sixteen; a short ghost story so abominably written that I now feel that the editor who bought it must have had a sadistic grudge against his readers.
— Anthony Boucher, Exeunt Murderers
Today I will attempt a first here on the blog. Thus far, I’ve mainly reviewed mystery novels, with the occasional foray into the short story collection. I’ve reviewed one film. All of these have been works of fiction, but today, I will write about some non-fiction for a change. But before I do, allow me to give a note of introduction.
Back in my pre-Agatha-Christie days (Heavens! Was there such a time?), I had finished reading the Sherlock Holmes stories and was unsure where to go to next. There were plenty of juvenile mysteries in the library, and I’d read them, but something just seemed to be missing, and soon enough I gave up on the adventures of the Hardy Boys or their female counterpart, Nancy Drew.
I turned my attention to Sherlock Holmes pastiches, going through some decent ones and suffering through some incredibly awful ones (one I recall was an abominable rip-off titled “The Prime Minister’s Papers”). Then, while searching for a DVD about the War of 1812 (a historical period I’m quite passionate about), I chanced across a tape recording of The New Adventures of Sherlock Holmes. I can even tell you which tape it was: The Guileless Gypsy and The Camberwell Poisoners were on the tape I checked out that day. 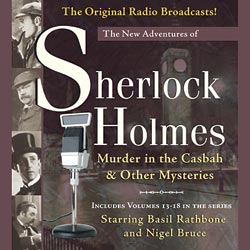 I was immediately captivated by the show. Nigel Bruce made for a delightful Watson, and Basil Rathbone was brilliant, perfectly capturing the spirit of Holmes. (He and Jeremy Brett are more or less tied as my favourite Holmes.) Not only that, Harry Bartell (the spokesperson for Petri Wine) practically stole the show with his charisma and charm— they managed to make a joke out of his commercials as he found the most improbable ways of worming Petri Wine into everything. (I still recall Nigel Bruce’s reaction to one of the ads: “Mr. Bartell, you ought to be ashamed of yourself!”)
I remember what I’d do at the end of each broadcast—when it was announced that the episode was inspired by such-and-such a story, I’d pull it down off my shelf and read it to locate the inspiration. I became fascinated with those two names: Denis Green and Anthony Boucher. When I finally got the chance to read Boucher’s Nine Times Nine earlier this year, I eagerly swallowed it up and it left me hungry for more. (Green is a far more elusive figure.)
Basically, Anthony Boucher (born William Anthony Parker White) is one of my heroes in the realm of mysteries : his and Green’s radio plays highly influenced my love of mysteries. After I went through my library’s recordings, I was on the road to discovering Agatha Christie (and subsequently, John Dickson Carr). And yet, I knew remarkably little about him: more or less that he was an influential critic, an author, an editor, a translator, and a fellow Catholic. 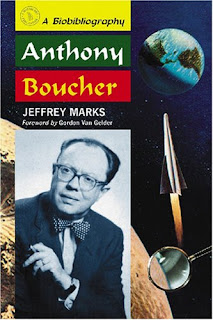 So you can probably imagine my reaction when I found the book Anthony Boucher by Jeffrey Marks. Here at last was my chance to learn more about my hero! I eagerly began to read, and the result is commendable. Marks has come up with a very readable, interesting bio-bibliography chronicling Boucher’s life and crimes.
The main part of the book is divided into a few sections: The Man, The Author, The Editor, and The Critic. There, Marks chronicles precisely that— Boucher’s early years, his involvements in the sci-fi community, his incredible work as an editor and critic, etc. All this unearths some really interesting information and correspondence.
I learned quite a bit about Boucher. I now recognize in him not only a fellow Catholic and fan of John Dickson Carr, but also an asthmatic. (My own asthma, thank goodness, seems to have more or less gone away— I haven’t been bothered by it for about five years now, and prior to that had six or seven years’ rest.) You get to learn a lot about Boucher, the man: about his devotion to his wife, Phyllis (there is a wedding photo on page 19 that I absolutely adore), and about his various health problems which kept him from being as productive as he would have liked. And some things never change— Boucher's genius (for it can only be termed that) did not earn his fellow classmates' respect, but derision behind his back.
Marks takes a look at Boucher’s output of work in this book, including some unpublished adventures that are going to haunt me for years to come! He looks at Boucher’s role as editor and critic and even chronicles something I wasn’t expecting to see: Boucher’s involvement in the Dell Great Mystery Library (of which I have only number 17, Death of a Ghost by Margery Allingham). 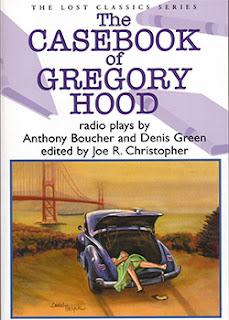 Overall, this makes for a highly readable work, but I have one or two criticisms about it. The first is a rather harsh one: Marks gives major, major hints to the solutions of The Case of the Seven Sneezes and Rocket to the Morgue. Although I can see why he’d bring up the point about Rocket to the Morgue, the stuff about Sneezes could have easily been excised and you wouldn’t lose anything. This left me very disappointed, as Marks had been careful with his other pieces not to give the game (or a large part of it) away. My disappointment was compounded by the fact that I’d just located Seven Sneezes in a bookstore after a considerable time wanting to read it— now I know the major twist. I highly dislike this kind of irony.
My other major criticism (a relatively minor one) is that due to the book’s structure, there are some uncanny moments of déja vu. For instance, when Marks talks about Boucher’s methods as a critic, I could’ve sworn I’d read this before— but how could I? I hadn’t skipped ahead or anything of the sort… After looking back in the book, I discovered the identical anecdote repeated in very similar wording about 3”x5” cards.
The editing of this book is generally solid, but occasionally it makes a whopper of a mistake that is briefly distracting. One incident I remember particularly well. A sentence begins to discuss 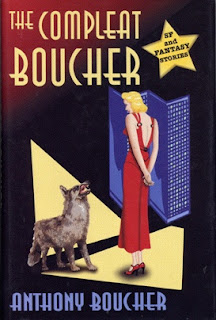 ↑ That right there happened. The sentence never went anywhere, and we’re left with a promising start to a sentence about Boucher’s criticism. Still, these occurrences are far between and low in frequency, so it isn't a fatal flaw, merely a briefly distracting one.
Jeffrey Marks has written a very good book chronicling Anthony Boucher, and I appreciate the work, as I now know a lot more about one of my personal heroes. There is a wealth of information here about everything from the fall of Old Time Radio to the formation of Mystery Writers of America. For those who want to torture themselves (Mea culpa), Marks even takes a look at an unpublished Boucher novel, The Case of the Toad-in-the-Hole. I recommend this book to all fellow mystery enthusiasts and Anthony Boucher fans.