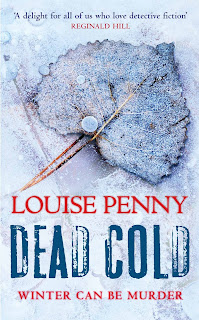 I suspect that Louise Penny has joined the likes of William DeAndrea and Bill Pronzini (and possibly Peter Lovesey) as modern/recent authors who have done an excellent job keeping mysteries alive and breathing. In June, I read her book The Murder Stone a clever book with a good impossible crime which was neatly executed overall. I compared Penny to Agatha Christie, pointing out it was a modern-day country house mystery, complete with an eccentric family ruled by a domineering matriarch. After a very good introduction to the author’s books, I eagerly picked up the second book in her Armand Gamache series: Dead Cold (a.k.a. A Fatal Grace).
Once again, Louise Penny does an excellent job putting the Canadian spirit onto the page. It’s excellently done, this time through the sport of curling. I’m not a curler myself, and I don’t follow the sport (which makes golf look like an extreme sport), although I have great respect for curlers themselves. Louise Penny obviously likes the sport a lot, and through her descriptions, the game seems to come alive. It’s all done very well, and is in many ways part of the plot— descriptions of snow-covered landscapes are lovely, but snowdrifts can complicate the investigation process, no? But she balances everything nicely: the characterization, the Canadiana, and the plot play off each other very well, and it never seems overdone. For instance, a group of people sit down to watch a hockey game. (Hey, it’s Canada!) Canadian’ passion for hockey is often the source of jokes, the scene here feels very authentic, right down to die-hard fans screaming the goalie should be traded when he’s having a rough night.
Dead Cold is solidly constructed. The plot is a simple one: CC de Poitiers was a delusional, vain “self-help” guru whose half-baked philosophies were ignored by everyone, although in her eyes, she was perfect, beautiful, and well-loved. In reality, her life was a mess, as she was despised by everyone she came into contact with, including her own family. During a curling match, she is suddenly discovered dead, apparently electrocuted on a frozen lake… But how is it possible? The investigators piece the puzzle together bit by bit, and you actually find out how it was done a long time before you find out who did it. (By comparison, in The Murder Stone, the answer to both who and how comes at the end. I don’t have a strict preference in methods— when done well, both can be just as good.) The solution to this problem is a good one, but one that seems to require this “piece-by-piece” approach to its solution. I think it’s overall slightly weaker than the problem in The Murder Stone, but it’s a solid problem nonetheless. 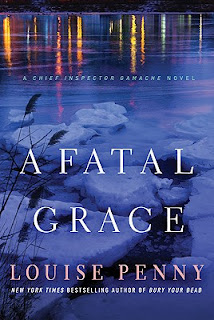 Louise Penny does an excellent job with her Quebec countryside village of Three Pines, which seems to come to life through its characters. They’re given personal struggles and there’s plenty of character development, but I didn’t feel they were stretched out unnecessarily. For one thing, these are interesting. Also, some of the characters’ conflicts are seamlessly woven into the plot. Basically, the plot is complex, and it achieves excellent balance with its “literary elements” like symbolism, characterization, etc.  Louise Penny not only comes up with a good story, she’s a masterful stylist.
Why do so many modern mysteries fail? Plot is too often sacrificed for the merits of Literature (with a capital L), which often isn’t too hot itself. Why do many modern Canadian mysteries fail? They do the exact same thing while trying to shove Canadiana down the reader’s throat, which can often get annoying. What Louise Penny has achieved is a wonderful three-way balance: this is not just a GAD-style, fair-play plot, but it’s wonderfully written and it involves Canadian people, passions, temperaments and places. It’s all wonderfully done and it really makes me truly proud to call myself Canadian.
Now excuse me while I watch old news reports on ex-Prime Minister Paul Martin to balance out the sudden burst of patriotism…