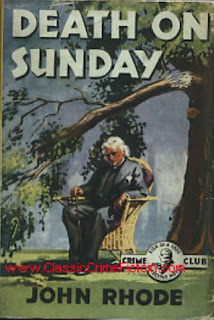 Recently, there has been much talk about a group of writers who have collectively been labelled “The Humdrums”: men like R. Austin Freeman, Freeman Wills Crofts, JJ Connington, and John Rhode. (I for one cannot wait to read Curt Evans’ book on the subject when it is published.) The derogatory label is extremely unfair, something John Rhode proves beautifully in his book Death on Sunday.
John Rhode was the penname of Cecil John Charles Street—but apparently, he went by John Street. Much like Cecil Day-Lewis (who wrote mysteries as Nicholas Blake), he hated the name Cecil. Rhode has a reputation for being a technically-minded man— for instance, thanks to his technical wizardry, Eric the Skull’s eyes glowed red at The Detection Club’s meetings. Rhode’s (undeserved) reputation is also that of a dull writer who couldn’t entertain a drunken fish.
Well, you’d have a tough time believing it in Death on Sunday. It is an extremely entertaining read. The main character, Inspector Jimmy Waghorn, is a likeable sort— he goes undercover in a residential hotel to track down a notorious forger who has been giving the police merry hell for a few years. The place seems nice and respectable… And then, one Sunday, the summer-house’s roof catches fire. All but the Reverend Lextable, an elderly and infirm clergyman, go to help out, which is when a giant crack is heard and a massive tree branch falls down and prematurely sends the Reverend to meet his Maker. Jimmy is convinced it was no accident, but who would want to kill an elderly clergyman? Before long, we find out some secrets, a young lady who seems to be implicated in the crime mysteriously disappears, the dead man’s possessions are rifled through, and chaos in general ensues.
Now, I’ll be totally honest: the plot is not great. I still have no idea why Jimmy came to the hotel in the first place, because before any of the mysterious events occur, he has no idea that the forger is among the guests. In addition, the choice of killer is entirely random, with no evidence pointing their way whatsoever— the culprit conveniently fires loose a slip of the tongue and confesses.
When it comes to the characters, don’t expect some deep psychological insight into life in a 1940s residential hotel. They’re a fairly typical bunch, and the one character really worth noticing is Jimmy. He’s an intelligent, likeable, and quite charming young man. He interacts well with his fellow characters, such as Barbara Merton, a young lady who dislikes her “job”: playing up to the other guests and that sort of thing. The other guests are fairly typical: the child whose mother pays no attention, the elderly military gentleman and his wife, a spinster who lives for her Pekinese, etc. 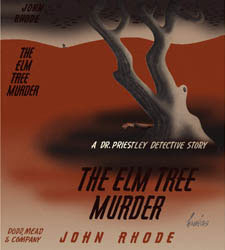 Rhode could’ve turned this story into an impossible crime, but he reveals the secret of the falling branch very early on in the proceedings. There’s one brilliant clue, and I’m ashamed that I missed it, but it doesn’t point out one person in particular— it just narrows down the field.
So why did I enjoy this story? It’s got a brilliant sense of humour. There’s a wonderful layer of satire and parody with these characters that makes what could’ve been a run-of-the-mill story quite enjoyable. Consider this very fun exchange between Jimmy (known to his fellow guests as “Mr. Walters”) and Barbara:
“Are you there, Mr. Walters?”
“Are we playing hide-and-seek?” Jimmy replied.
“No, we’re not,” the girl replied sharply. “Mrs. Droitwich asked me to go out and look for you. She and the Colonel want to make up a four at bridge.”
“Then you haven’t found me,” said Jimmy tranquilly. “You hear my astral voice, but my corporeal body is elsewhere.”
Dr. Priestley investigates the murder and he’s unusually subdued. In the subpar Mystery at Greycombe Farm, he was running all over the place. Here, he sits at home for the entire story and just shows up for the final 20 pages to prove that he’s every bit as omniscient as The Thinking Machine.
If you want a solid read from John Rhode, Death on Sunday is the ticket. It isn’t a particularly good puzzle and it is far from revolutionary, but by gum, is it ever a fun read. I heartily enjoyed it and I suspect others will too.