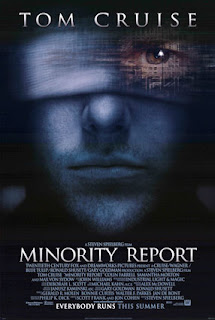 The 2002 movie Minority Report is one of my favourite movies of all-time. Then again, maybe I’m a little bit biased. I’m a huge fan of director Steven Spielberg, I tend to like action movies, and I really liked the movie’s creative visuals and special effects. I’d argue that it’s one of the greatest movies made in recent years, and it’s also a movie that mystery fans would probably enjoy.
The movie is based on a short story by (who else?) Phillip K. Dick. It stars Tom Cruise, who in those days hadn’t yet become the major punch line he is now. Cruise plays John Anderton, Chief of the Pre-Crime Unit in Washington, D.C. The Pre-Crime unit uses “precogs”, mutated human beings who experience visions of future murders. These are interpreted by police officers who go and arrest the culprit before they can commit their crime.
All in all, it’s a perfect system: it’s never been wrong before, John Anderton explains to Danny Witwer (Colin Farrell). To demonstrate, he rolls a ball along a counter, and before it falls to the ground, Witwer catches it. “Why did you do that?” Anderton asks. “Because it was going to fall” comes the reply. “But it didn’t fall—you caught it.”

In fact, if there’s any flaw in the system, it has to be human, and that is the reason for Witwer’s presence. There is a major push to make the Pre-Crime unit national, and Witwer closely examines Anderton’s life: John has lost his son, his wife has left him, and he is addicted to drugs. And then something happens: the precogs experience a vision, and Anderton is busily interpreting them. Suddenly, he realizes something: he is the murderer in this vision, shooting a man named Leo Crow while an unidentified woman and man watch. The balls that roll out with murderer’s name and victim’s name are brown—which means the murder has been premeditated. But how can this be? Anderton has never met Leo Crow and has no idea who he is, but he is supposed to kill him in 36 hours!
The system cannot be tampered with, so what is going on? As Anderton finds out, the precogs occasionally disagree about the criminal’s culpability, but in those cases, the minority opinion is simply suppressed, because the justice system in the future dislikes ambiguities and a system that may be faulty. So off Anderton goes to find his own “minority report”, with the police after him, led by Danny Witwer.
The explanation for who Leo Crow is and why the murder is premeditated is simply brilliant, and that is the high point of the puzzle. The movie then introduces a second fair-play mystery, but it is much more easily solved. The least satisfying thing about the mystery here is the easy way one character deduces another person’s guilt, with a hint that could’ve been taken out of a Murder, She Wrote episode. However, to make up for this, the movie throws several great visual clues that are all explained to the viewer first; this makes everything satisfying in the end. Like Isaac Asimov’s The Caves of Steel, this is a successful hybrid between science fiction and mystery, and it relies on pre-explained futuristic technologies for the crime to work. The main difference between these two works is that Minority Report shows more cleverness in its solution, whereas The Caves of Steel is most clever with its multiple false solutions.
That being said, there are plot holes in this movie, but they have more to do with the science fiction aspect than the mystery aspect. For instance, how can Pre-Crime suddenly go national? How can the pre-cogs be forced to see murders from all over the country when before their visions have been limited to a small radius? (I think the unspoken answer is that there are other pre-cogs waiting to be pressed into service, which paints a somewhat disturbing dystopian picture.) These holes, however, are very cleverly concealed by Steven Spielberg, a master filmmaker, so that they only become apparent on subsequent viewings, and do not detract from enjoying the movie.
The action scenes are excellent, such as a stunning sequence where Anderton has to escape from his car on a sort of magnetic strip highway. There’s a great fight in a car factory, and a visually fascinating scene where the police release “Spyders” into the building in which Anderton is hiding, in order to scan everyone’s eyes to confirm their identity. There’s also a brilliant scene where Anderton has to trust a pre-cog, Agatha, who instructs him on what to do in order to escape from the police inside a crowded mall. The directions sometimes seem to make no sense, but when you realize what Agatha is up to, the result is brilliant. Heck, even the opening scene has a number of brilliant references to Hitchcock!

The cinematography, helmed by long time Spielberg collaborator Janusz Kaminski, is excellent- a monochromatic look dominates, as colours seem darker and faded out, visually highlighting the dark aspects of this futuristic world. And the futuristic technologies are all very realistic—some, including the computers and video conferencing, seem like just a small step away from being reality.
Overall, Minority Report is an excellent movie about a dystopian society while keeping elements of mystery and science-fiction prominently. Mystery fans will probably enjoy it, as it plays fair with clues and shows some originality in the puzzle. Fans of action movies will get their share of thrilling chases and escapes. All this is put together beautifully by Steven Spielberg, and Tom Cruise gives an excellent performance in the lead role. The supporting actors are also very good, with the likes of Max von Sydow, Colin Farrell, and character actor Patrick Kilpatrick putting in solid performances. I highly recommend it as an enjoyable and thought-provoking movie.