It was a dark and stormy night... 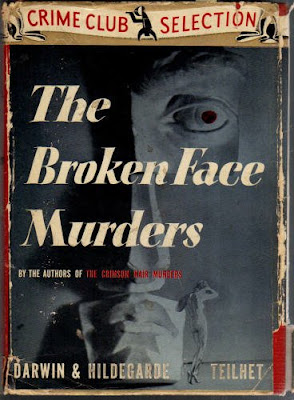 Darwin and Hildegarde Teilhet were American authors who sometimes worked together but sometimes worked separately. I really can’t say much more about them. Teilhet is known among Golden Age enthusiasts as the author of The Talking Sparrow Murders (which I’ve yet to read). Although written in 1934, it had a strong and unrepentant anti-Nazi stance, at a time when the Nazis’ rise to power didn’t seem like an extraordinary issue. After all, Germany had been so unstable it seemed like Hitler was just the latest in a long string of leaders.
But when 1940 rolled along, times obviously changed— in September of 1939, Hitler precipitated World War II by invading Poland, and before you knew it, all of Europe was engaged in warfare. And it was in 1940 that Darwin and Hildegarde Teilhet released The Broken Face Murders, being the fourth adventure of the Baron Franz von Kaz, a comic detective in the tradition of John Dickson Carr’s Sir Henry Merrivale.
Only the Baron’s adventure is hardly a comic one. Perhaps it was just in this book, but this is a dark and sombre tale, with plenty of greed, corruption, and racism. The Baron von Kaz gets married to Caryl Miquet (a presumably recurring character), to kick the book off with a bang. They then get in a car and head to Los Corrales, where they’ve signed a lease for two years on a lovely “dream home”, complete with ten acres of land. And it’s unbelievably cheap, too— the Baron managed to get it from the owner, Mr. Gulthwort, for a mere $100 a month.
Now, I know there’s been a lot of inflation since the 1940s, but even for that time, $100 monthly for such a property is a staggeringly small amount. And the Baron von Kaz finds out that there is indeed a catch when Mr. Gulthwort stumbles in on him and Caryl as they prepared to spend the night together. Gulthwort gets talking to the Baron alone, and starts to babble about how he’s got the baron in a corner, that the baron simply must help him now, and that his enemies will never find out from him where the “broken face” is.
Caryl, meanwhile, is not happy at being left alone upstairs. She calls the Baron upstairs and demands that he force their late-night visitor to leave. So the Baron, full of resolve, comes lumbering downstairs. But a grisly sight awaits him—Mr. Gulthwort is lying slumped in his chair, a hole in his head caused by impalement on a paper file. Suddenly, a gun is jammed in the Baron’s back, and the assailant demands to know the location of the broken face. He seems disinclined to believe the Baron’s protestations that he really doesn’t know where the broken face is…
Enter Caryl Miquet, who has grabbed her husband’s gun and come downstairs. She fires two shots, and by sheer mischance, one of them manages to lodge itself in the dead man’s head, obliterating the traces of the paper file. When the cops arrive, they decide that Caryl shot Mr. Gulthwort and the Baron made up a fairy story to cover it all up. They take her away… and that’s just the first two chapters.
The rest of the story is an extremely complex one but with simple ideas at heart. Basically, this is an investigation in the Phillip Marlowe routine— there’s a lot of emphasis placed on corruption in politics, in the police force, and anti-Semitism. The Baron gets in a few fights that Phillip Marlowe would have been proud to partake in, but it seems somewhat odd to see him in the melee. It seems that the mayor of Los Corrales and the head of police are somehow in cahoots with one another. They seem anxious to cover up the crimes, and all this seems to tie up with the death of the previous mayor, supposedly by accident.
The tale is dark and unrelenting— in one of the opening chapters, the murderer even kills a dog that may have recognized him. It’s a chilling moment. Other moments, such as a confrontation in the mayor’s house full of veiled threats, are equally disturbing. So when the comic relief comes, it feels like a desperately needed source of relief. These scenes of comic relief are often rather brief, but quite funny. One of the best is when the Baron gets information out of an uncooperative shopkeeper by threatening property damage. Another very funny moment is when the Baron eagerly destroys a priceless painting looking for a hidden message, and decides that his “altered” version is undoubtedly a major improvement.
And yet, as appreciated as these moments are, they do seem somewhat out of place in this story. Its dark and unrelenting nature does not make it an unequivocally fun read, and at 300 pages, it sometimes feels quite padded. There are also uncomfortable parallels with Hitler’s rise to power, as we see the mayor is head of a very similar organization that absolutely hates Jews. The Baron, who is sympathetic to the Jewish cause under Nazi oppression, is not an entirely welcome guest as a result.
The “broken face” is a clever plot device, and its ultimate location has a perverse sort of simplicity behind it. However, it succeeds only in making the Baron von Kaz and the police officers look like complete morons for having overlooked it, and it seems like an unnecessary moment. Even the Baron seems to consider it a futile discovery, for reasons he analyzes in the finale. Nevertheless, the ending is excellent, with a very suspenseful and skilfully-written shootout followed by a memorable scene between the Baron and... oh, maybe I’d better not say who.
Despite some reservations, I’d recommend The Broken Face Murders. It isn’t an unheralded classic in the genre, but it is undoubtedly worth a look for its scathing portrait of anti-Semitism and, in some ways, American society.