The Winding Rhode of Deduction 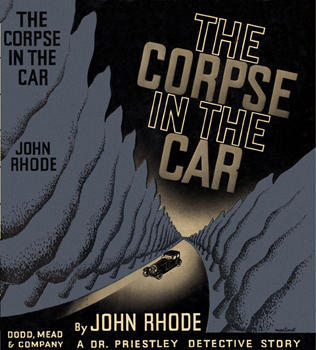 Lady Misterton was a general pain in the derrière to everyone she came into contact with. But on this occasion, she really crossed the limit. While driving through Windsor Great Park, she commanded her chauffeur, William Fitchley, to pull over. She had forgotten her handbag back at her residence, Clandown Towers. However, instead of turning back the car, she ordered the chauffeur to walk the three-and-a-half miles back to fetch the bag. Fitchley walked off obediently as Lady Misterton began to knit, while a portable wireless radio played Saint-Saens’ Danse Macabre. When Fitchley arrived at Clandown Towers, he found out that Lady Misterton had taken her bag with her after all…
Furious, Fitchley decided to dally on the way back and stopped at a pub for a “quick one”. Unfortunately, when he exited the pub, he failed to notice an oncoming vehicle. He was hit and subsequently hospitalized… But what about Lady Misterton?
Unfortunately, the old broa—er, lady, failed to recognize the signs that she was trapped in a mystery. She was, perhaps, at a slight disadvantage, since Jonathan Creek was not around yet to use Danse Macabre as its theme song. However, that doesn’t change the fact that a few hours later, Lady Misterton was found dead in her car, and the cause of death cannot be determined. This forms the plot of John Rhode’s The Corpse in the Car…
Why yes, the book is an impossible crime of sorts, as Dr. Lancelot Priestley is called in to determine how an assassin can strike someone down at will without leaving any traces behind. And what a job Priestley does! The method employed has a diabolical ingenuity underlying it, and the doctor does a bang-up job deducing whodunit, how, and constructing a solid case for the prosecution. Unfortunately, as is often the case with John Rhode, the murderer’s identity is extremely easy to spot. However, that doesn’t change the cleverness demonstrated by the rest of the plot, which had me completely fooled. It also doesn’t hurt that I really like tricks in this general vein.
However, this book contains more than a good plot. I venture to say that it is invaluable for exposing the lie inherent in the idea that Golden Age authors were always romanticizing the upper class. John Rhode is absolutely relentless towards Lady Misterton. She is a genuinely disturbing person at times— she professes herself to be a lover of cats. There’s no harm in that, right? Well… this adoration goes to such lengths that whenever one of her cats dies, she has it stuffed and added to a macabre collection of stuffed cats, of which there are 42 (!!!). While alive, she did her best to distance herself from fellow human beings as much as possible, showing an incredible snobbery that Rhode certainly does not approve of! 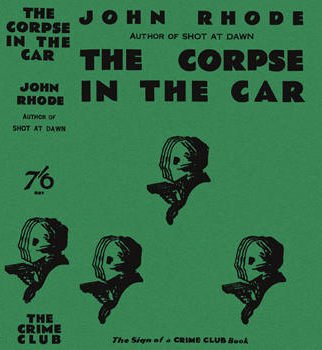 Other upper class characters are similarly skewered, particularly Lady Misterton’s brother, Mr. Ormskirk. Nastiness seems to run in the family, as he is only concerned with how he can profit by his sister’s death… now that she’s dead, that is. While she was alive, he was only concerned with what a fool she was being, paying attention to a charming young fellow who professed himself to be a fellow lover of cats. Lady Misterton’s niece, Emily Higson, is portrayed with sympathy— she married a clerk in a legal office who isn’t particularly rich, but they have a decent life together. But Lady Misterton couldn’t stand him, for the simple reason that he didn’t have money. Lady Misterton was able to marry into money, why couldn’t her niece do the same thing?
Then there’s the chauffeur Fitchley, who was hired specifically because his father was a taxidermist and thus, Lady Misterton could continue having her cats stuffed for a meagre 30 shillings a week. Fitchley is ruthlessly exploited by Lady Misterton and he is far more sympathetic— he’s a clever, resourceful fellow who knows how to use his brains. The only reason he’s stuck in her service is because he was desperate for money and there isn’t much of a market for taxidermy any more. The character reminds me of a clever child in Rhode’s Death on Sunday, who is ignored by his mother and disliked by fellow guests at a residential hotel…. But Rhode’s sympathies seem to lie with the child, who is the only person there doing anything really worthwhile!
Overall, John Rhode’s The Corpse in the Car is an excellent book that showcases Rhode’s storytelling talents very well. The plot moves along very rapidly and has several intriguing threads chasing each other, involving the theft of one of the stuffed cats and a potential will that may or may not be missing (assuming it exists). It’s finely-crafted and shows Dr. Priestley at his scientific best, not letting a single anomaly get by him without an explanation. If you’ve never read John Rhode and want a good place to start, this is it.